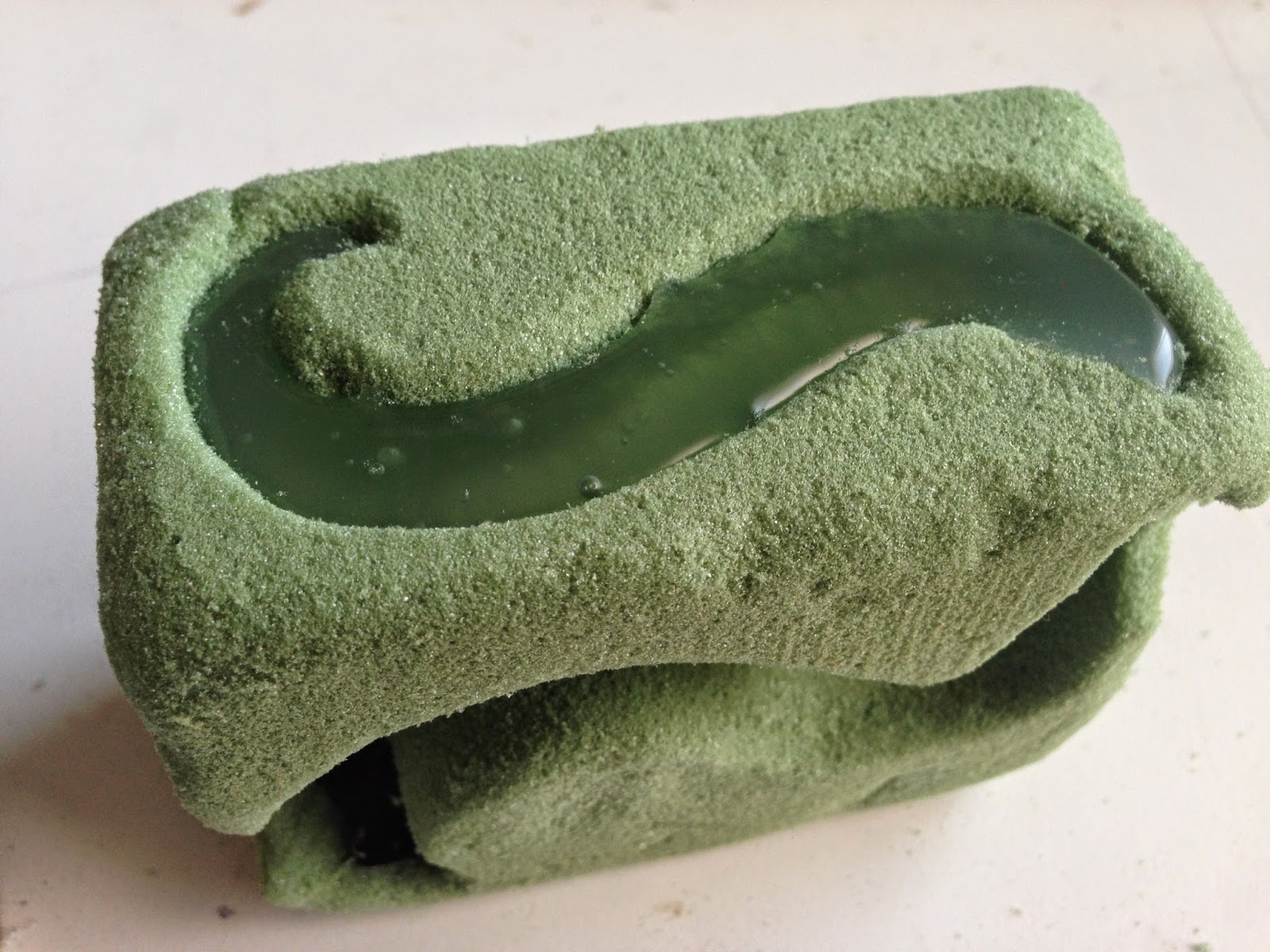 This project started out as an effort to create epoxy tentacles in a mold carved from a hard styrofoam.I created the molds in curling, twisting shapes, filed them with the epoxy, then allowed to dry. Easy enough.
But when I removed the epoxy from the carved molds, the foam stuck to the tentacles, creating a form of "flatness" or lack of shape to one side (visible along the top edge) as the epoxy settled into itself on the outer-most edge. 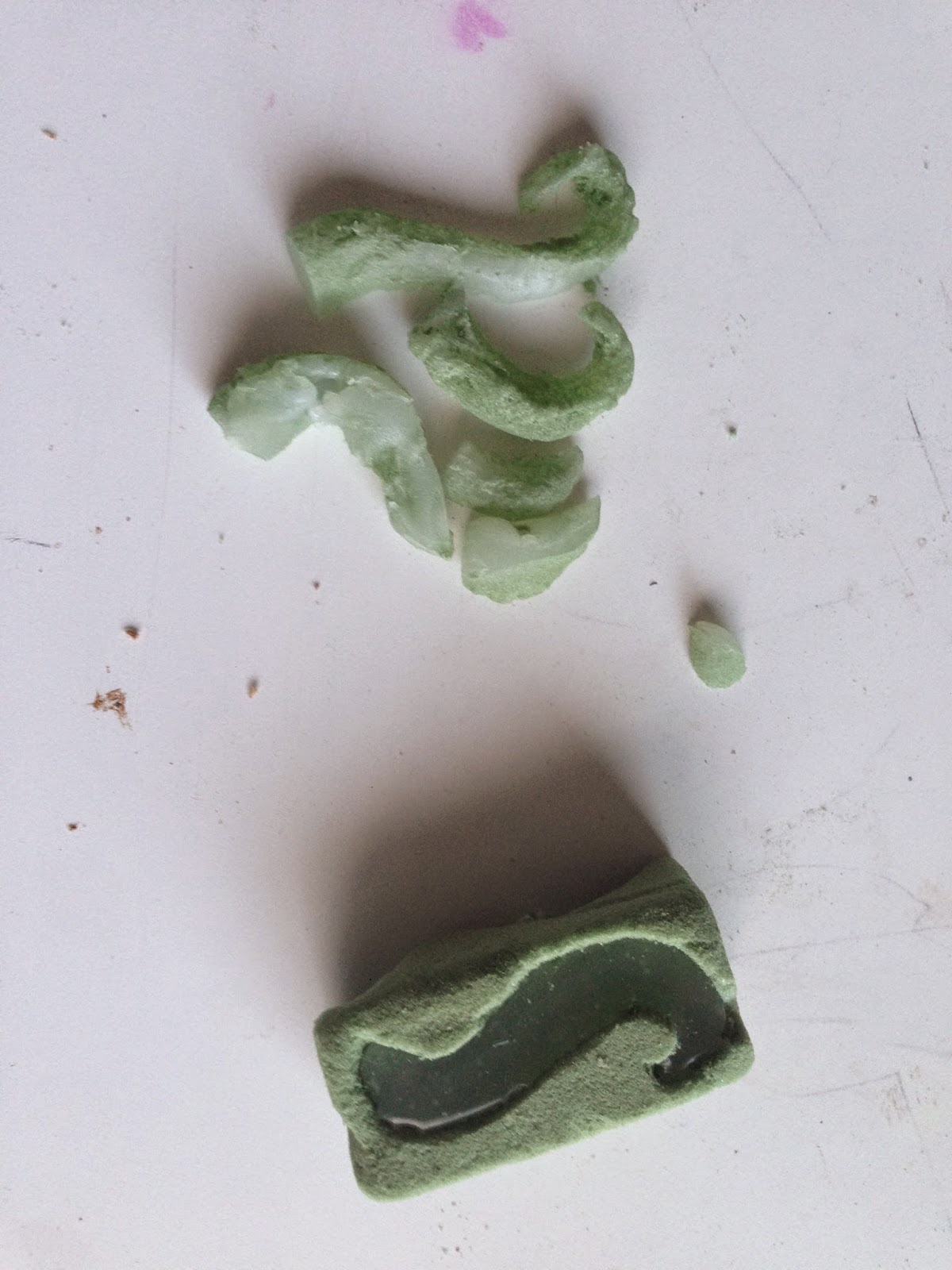 As a result, my "tentacles" came out 3 sided. More or less.
Lacking in the "roundness" and shape I desired to really capture the form of a twisting, reaching form. What the epoxy did do very well however, was form into useuable shapes that could easily be converted into stalagmites.

Peeling each tentacle from it's foam cocoon created a deep interior hue of green (from the foam) but also allowed bits of the foam to settle into the mass itself, giving the now shaped "stalagmites" various molds, growths, and bacterial lifeforms clinging to their crystal sides. A completely unexpected, and brilliant result.
By placing the various shaped stalagmites into random groupings, and adhering to a generic baseplate for use in dungeon terrain, I was able to create a series of small crystal growths that have an eerie, under dark otherworldly look and feel. 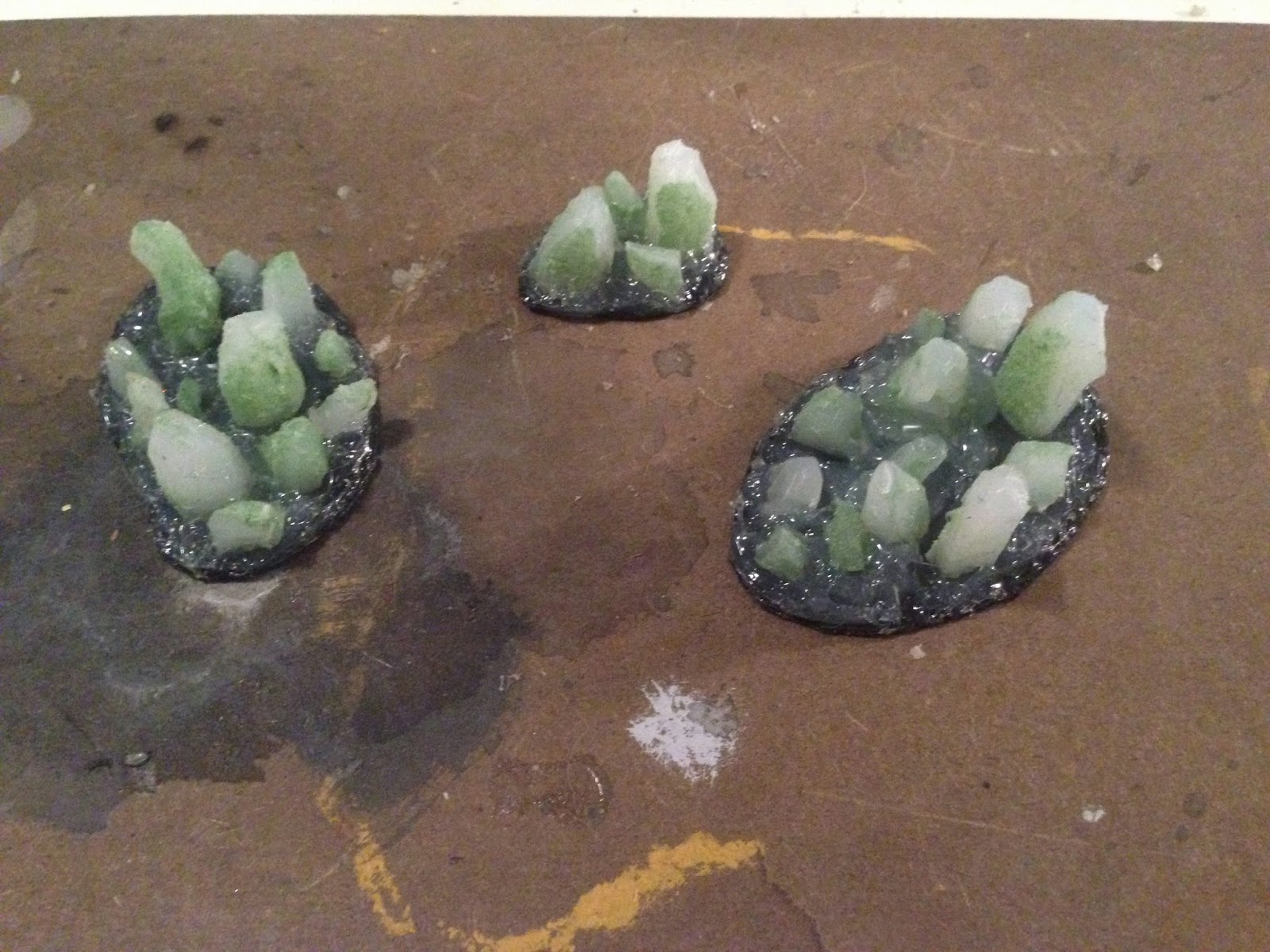 The small stands of stalagmites defy the standard "straight up and down and jagged" look by literally taking the crystalize-shape of giant quartz crystals jutting from an alien surface.
By surfacing the ground structure each crystal was adhered too, the crystals take on even more depth by looking as if they are literally growing right from their own organic ground surface.
While the epoxy was still hot, I sued a small tool to poke, mix, drag, and churn the hot epoxy into a series of undulating shapes and curves-think lava or underground flowstone. 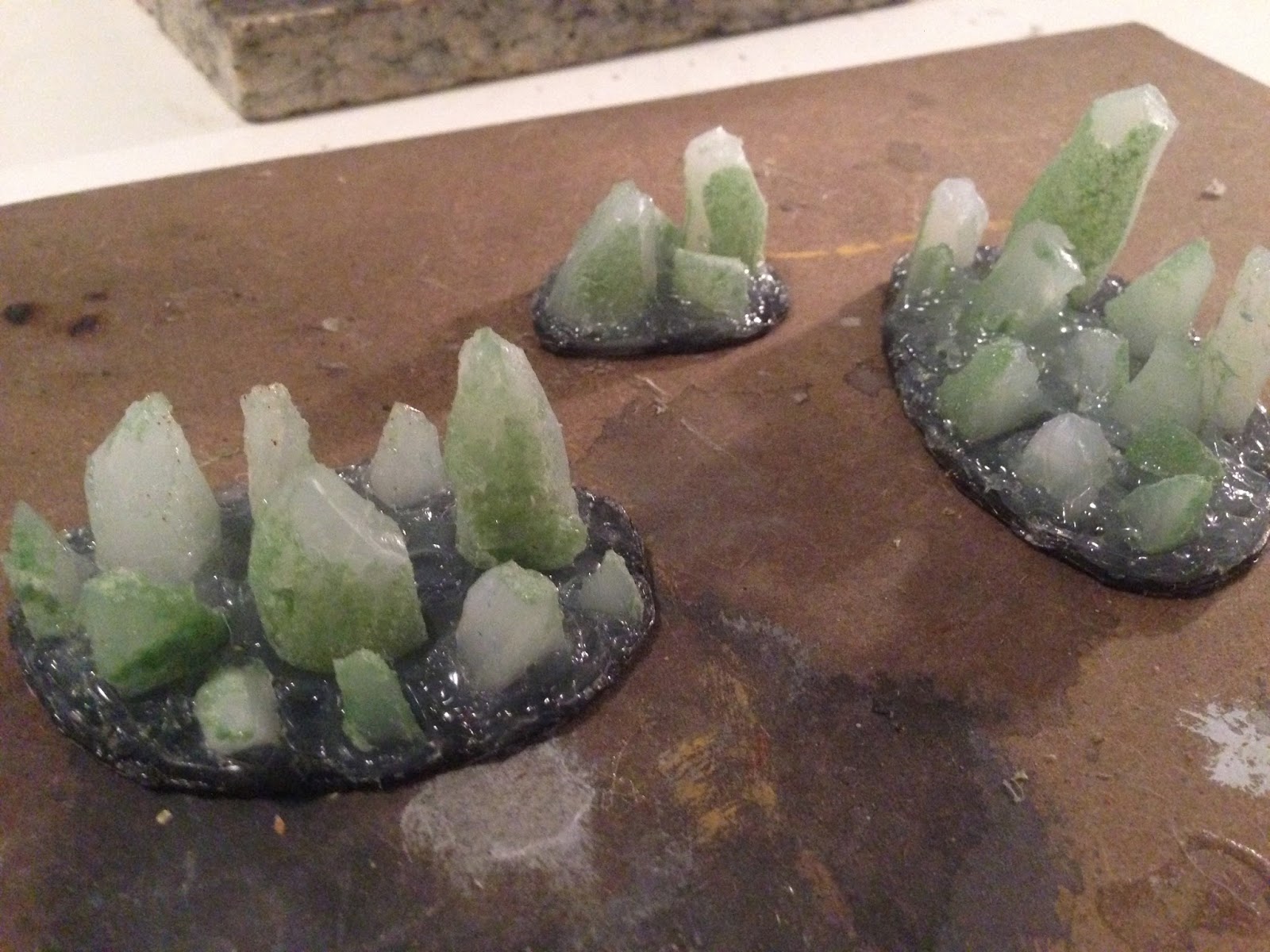 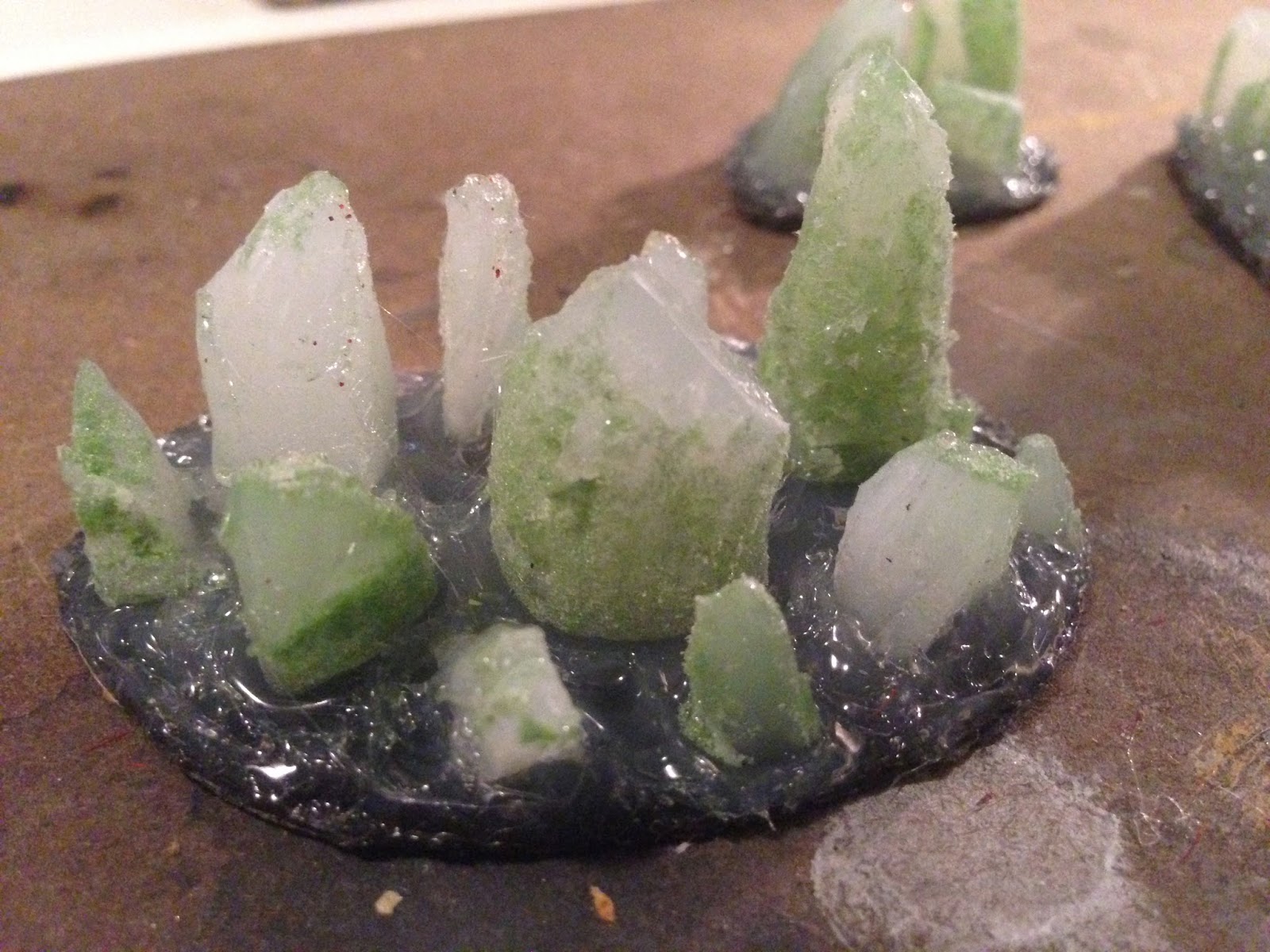 In the next update I will add color to just a  few spots to bring in a form of "cavern consistency" with the color palette I use on my own Underdark campaign world terrain, and to try to match these growths to the same realm from which other creations have come. I find that a touch of grey-blue or purple to the crystalline shape gives a magical sense of "glow" from each quartz crystal, and also unites these individual pieces to other modular terrain as a whole, adding even more possibilities for fantastic fantasy realms brought to life on the tabletop.