What good are projects of miniatures and fantasy characters without epic terrain and backgrounds to go with them? At the very least, a backdrop of old stone, forest pines, or stone mounds adds a sense of wonder and imagination to a simple image of a figure so painstakingly cared for and detailed.

For the continuation of my Paladin, Shambling mound, and War Elephant project, I tried to outfit and present them in an environment I thought they may actually find themselves in during any given tabletop game...

Paladin of the White Flame

For the Paladin, I added a bit of "distress" to his features not really captured by the camera. I wanted this cloak to look like it was "used" and not just court wear for the halls of old Greyhawk. Tattered spots, tares, and even holes are visible on the underside. Slight bits of fresh blood dripping down the magical rune script of the sword, and even wear and tare on boots and armor. Having looked at this closer, it seems it could use some additional depth, though, especially on the cape and backside. Nothing a bit of black wash can't "bring out" to add life to his adventure-torn appearance. 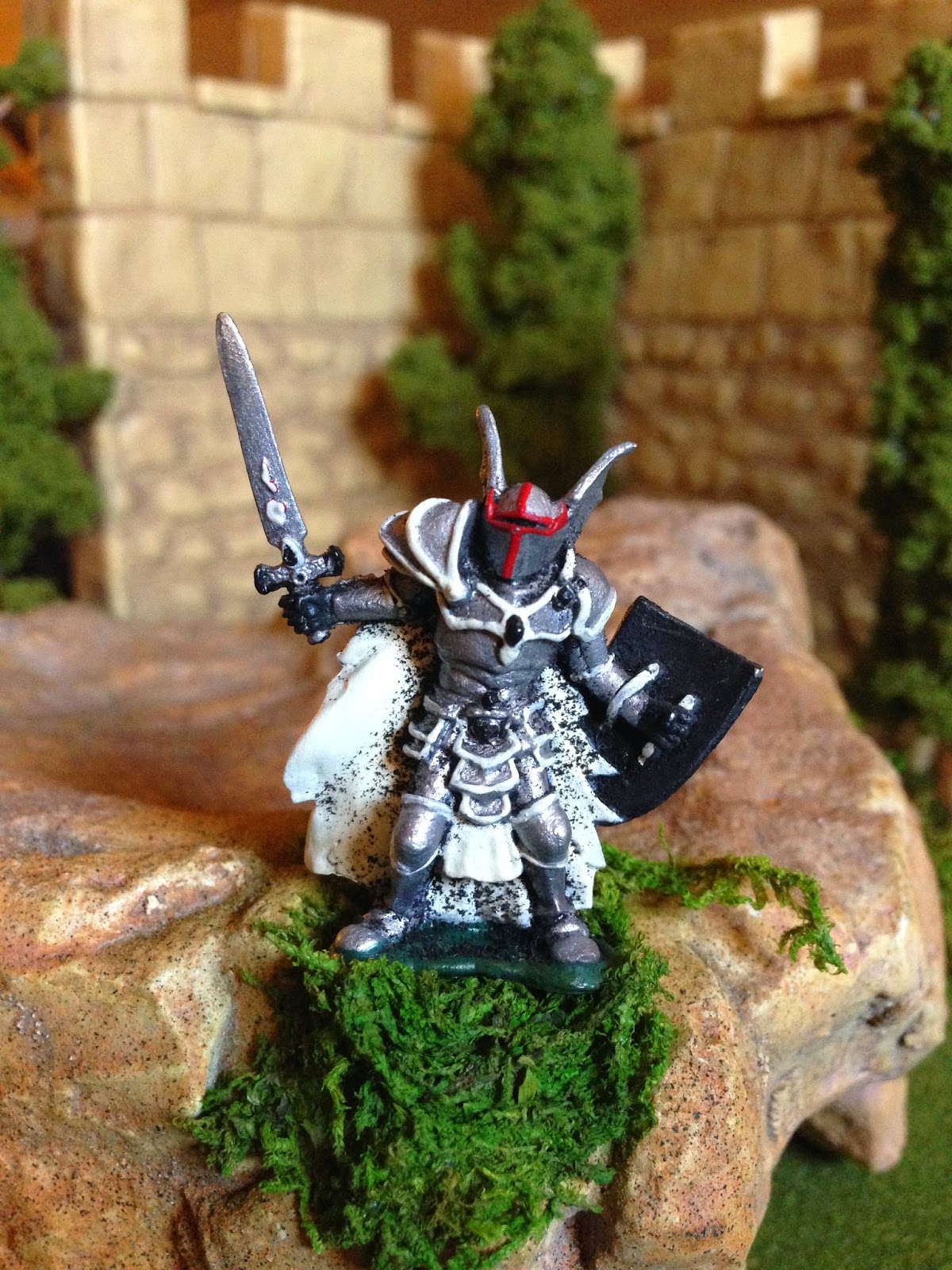 As detailed as the base is from Reaper miniatures, the texture would likely be best in a solid black. While this paladin's green base works well for outdoor encounters, I always prefer something neutral that does not take the character and your imagination out of the game if possible, and every time he sets foot into a stone dungeon, the green of his woodsy looking base seems out of place. 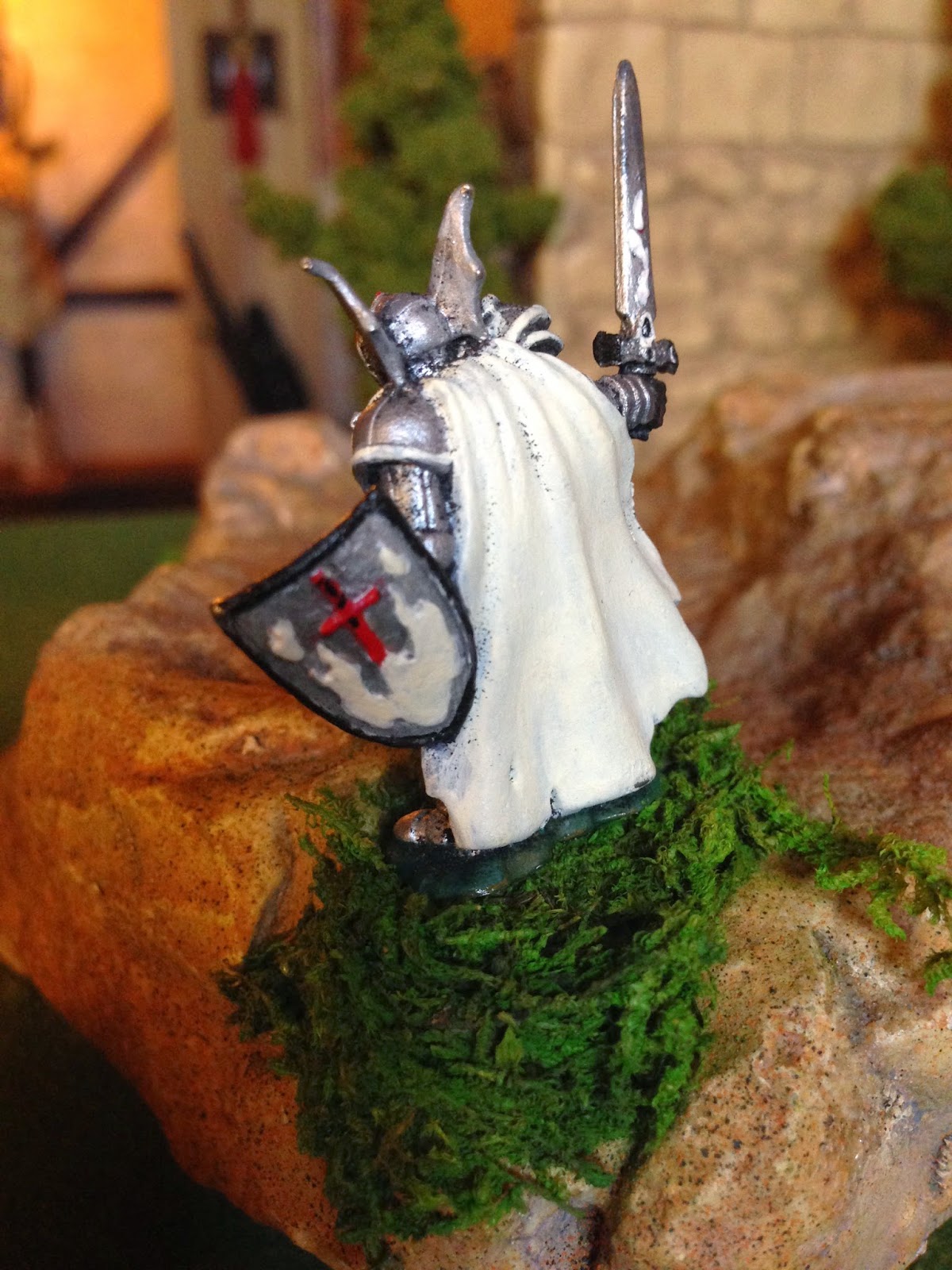 The Shambling Mound was designed to look so much like a natural form, that unless the peering green eyes were seen, one would easily mistake it for a bit of brush or a rotting bush of some sorts. I always pictured a Shambling mound coming from the magical undergrowth of rotting leaves and dying vegetation, with its only life being the eyes itself. So its general appearance fitting into a woodland scenery was first and foremost. 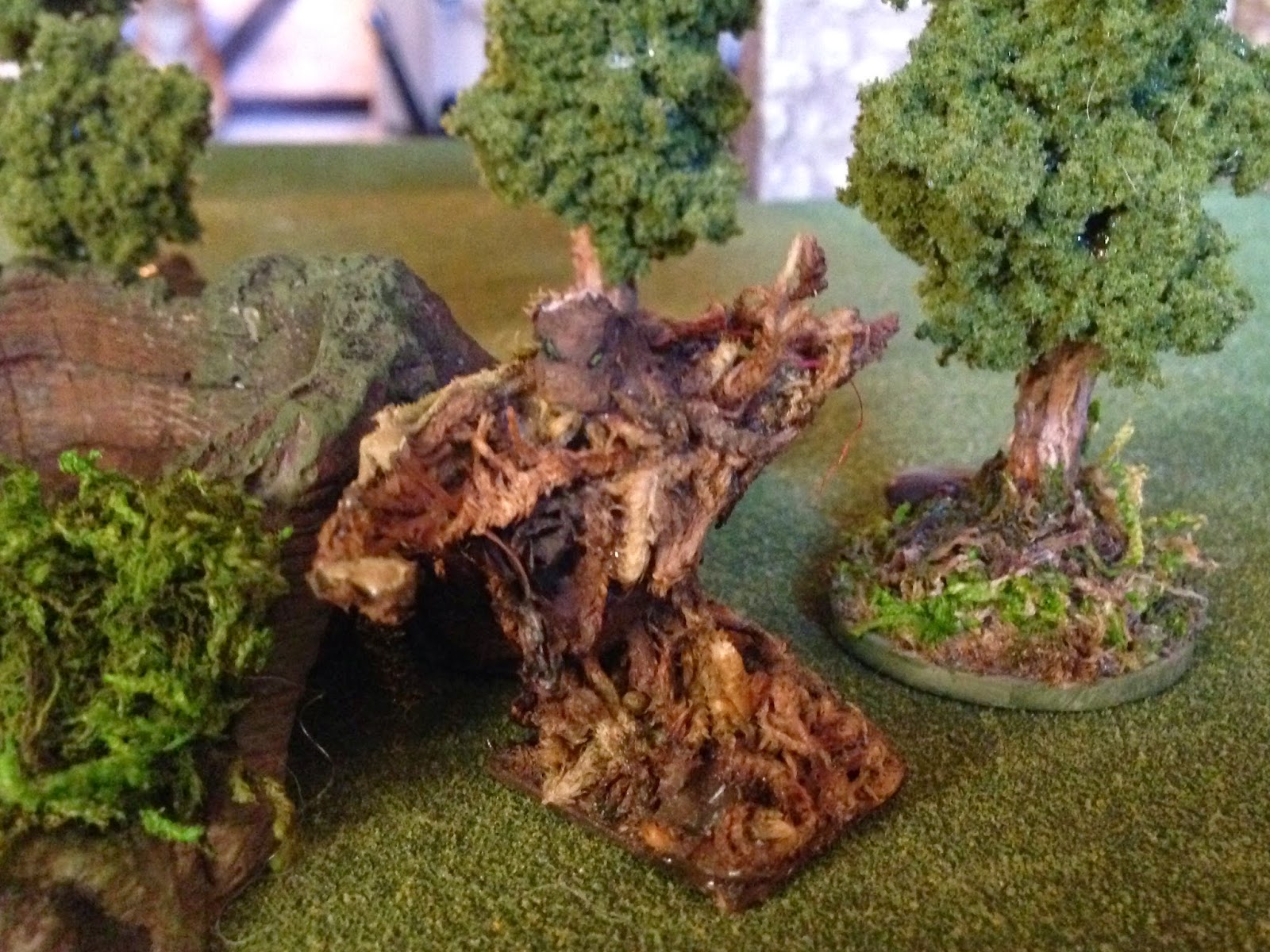 It is not until the small subtle slits of glistening green are seen, that it becomes apparent that this tangled mass is  a living moving thing. 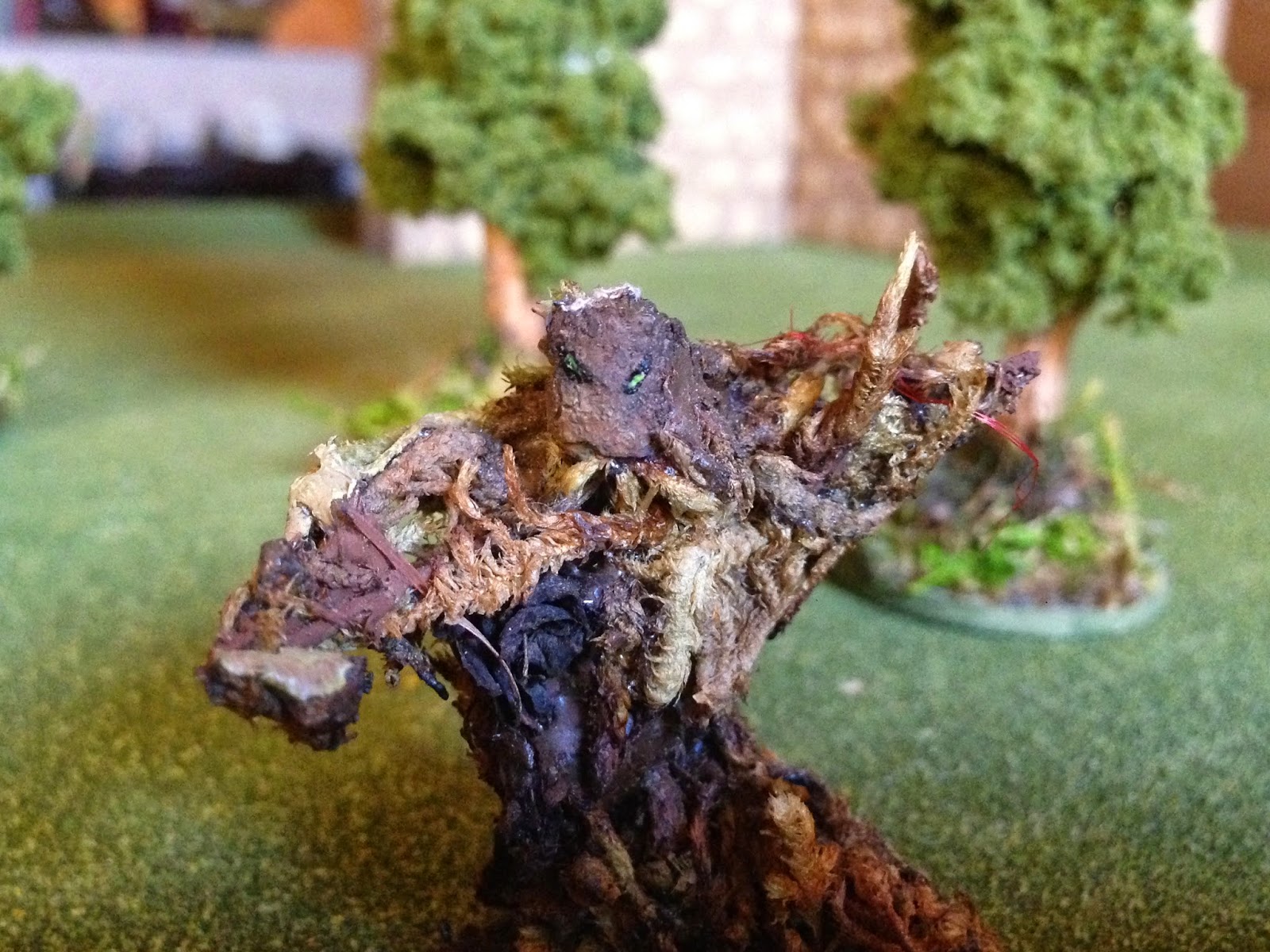 For size comparison, next to a Halfling, I wanted the creature to tower over, but not be so large and great that it would appear as an insurmountable foe. A small woodland encounter mysterious and nostalgic enough for a small raiding party was the goal with this custom-made creation.
Sadly the photos do not do this creature justice, as he took Best in Show at the 2010 Conduit Miniature competition. 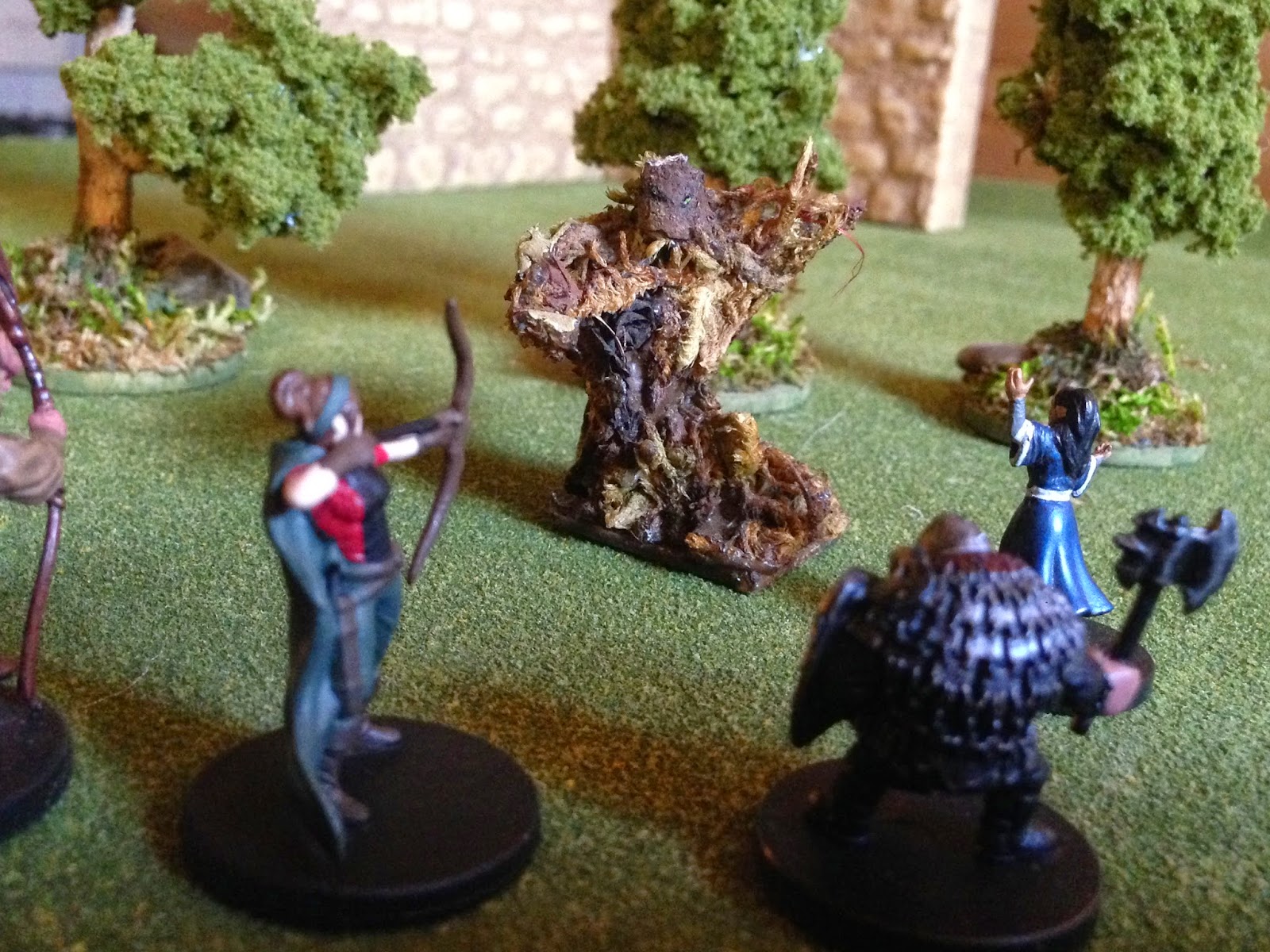 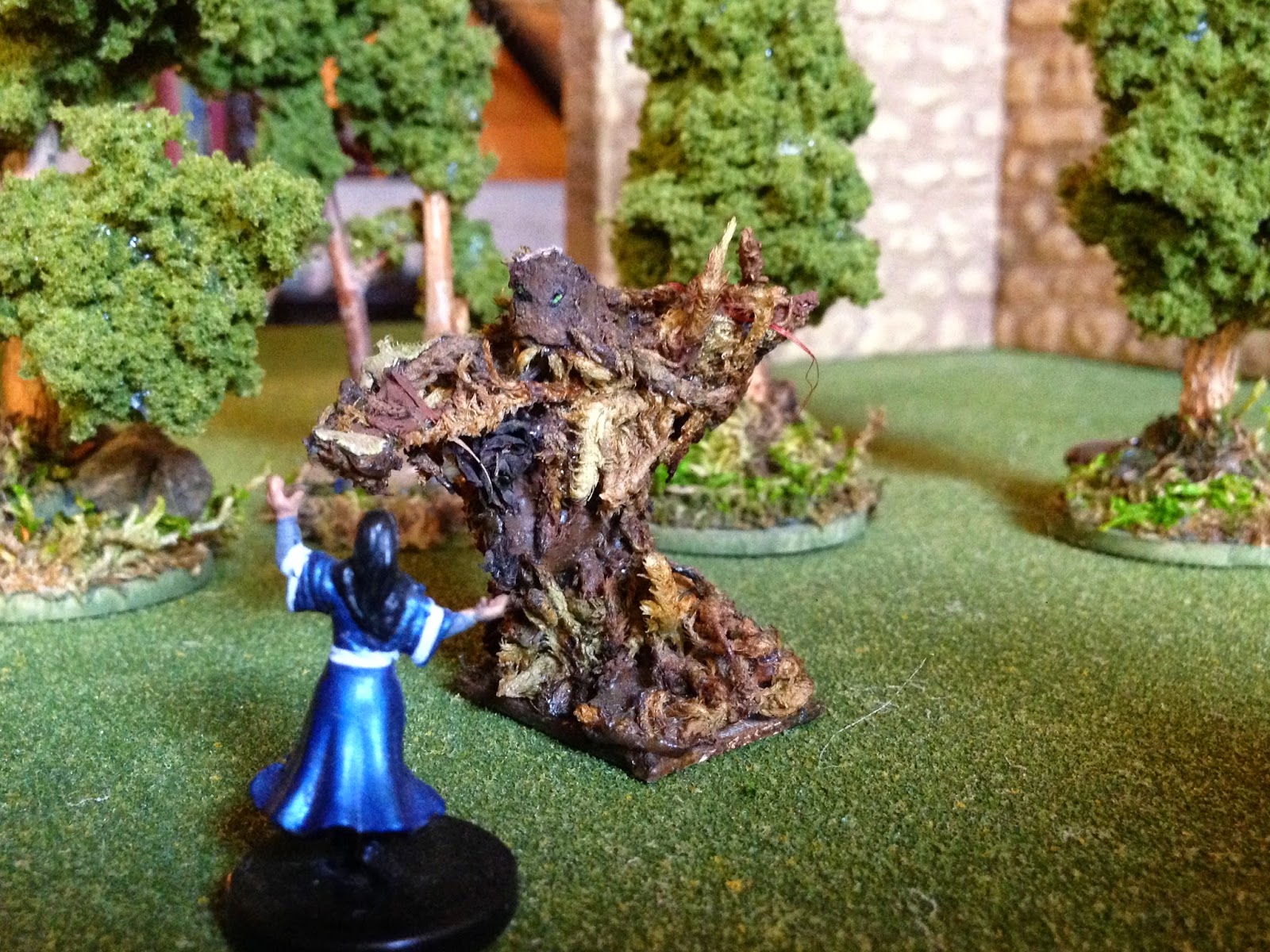 There are a series of thrift stores here in the state of Utah called Deseret Industries. Within these stores of used clothing, and just about every random item and outdated VHS tape one could ask for, lie often times isles and isles of completely scattered, mis-matched and discarded, but perfectly adaptable, toys. It is from these disheveled and rarely organized racks that I find some of the greatest creations. Such was the case with this Orc War Elephant. 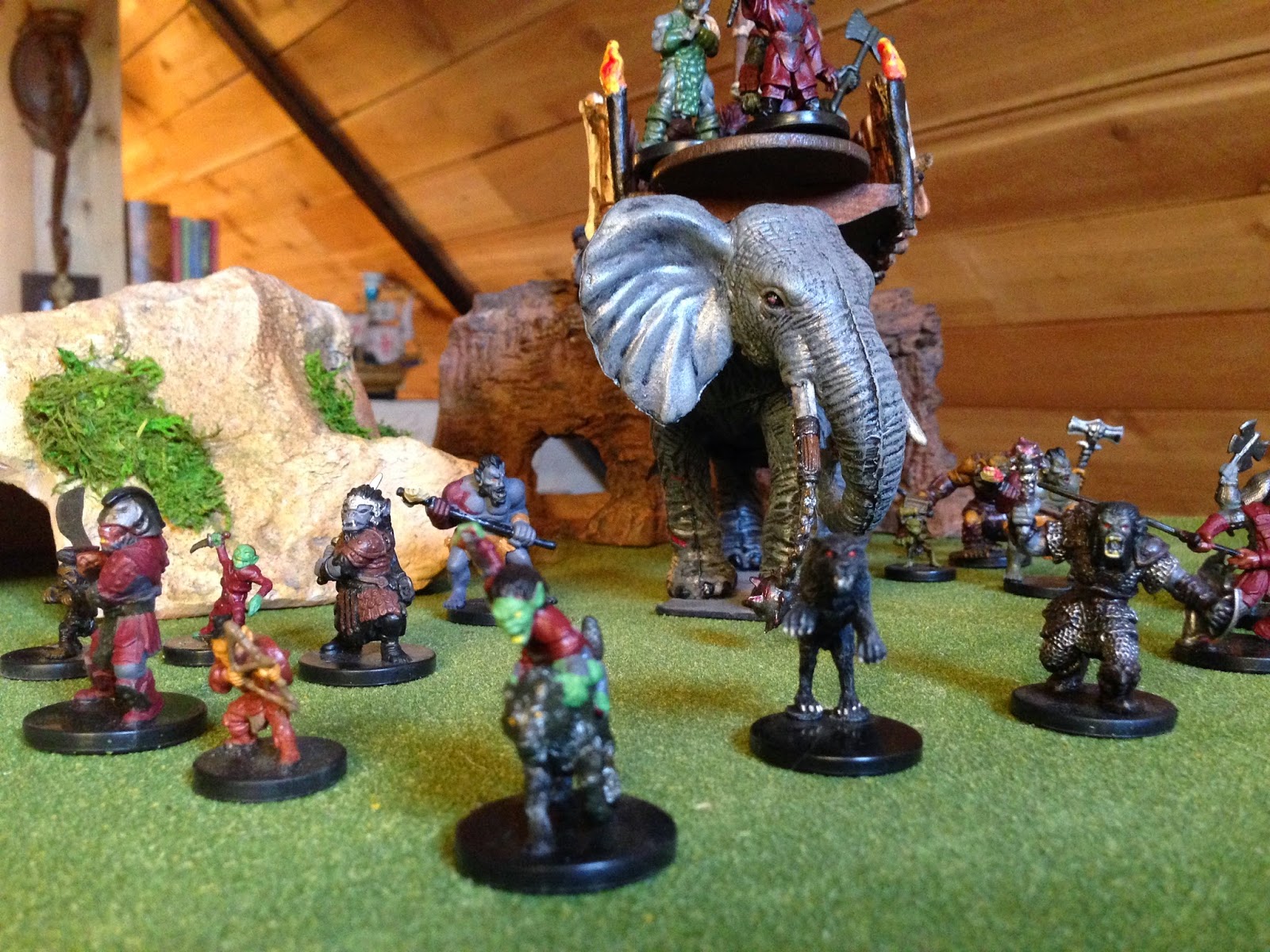 This poor fellow was missing one tusk, broken at the tip. But having just finished a Lord of the Rings movie marathon, the idea of the angry Oliphiant was fresh on my mind. Nearby his discarded glossy grey frame lie a battered toy of some sort with a long spoked flail. Together, they made for an odd and yet completely believable duo of Orc madness. 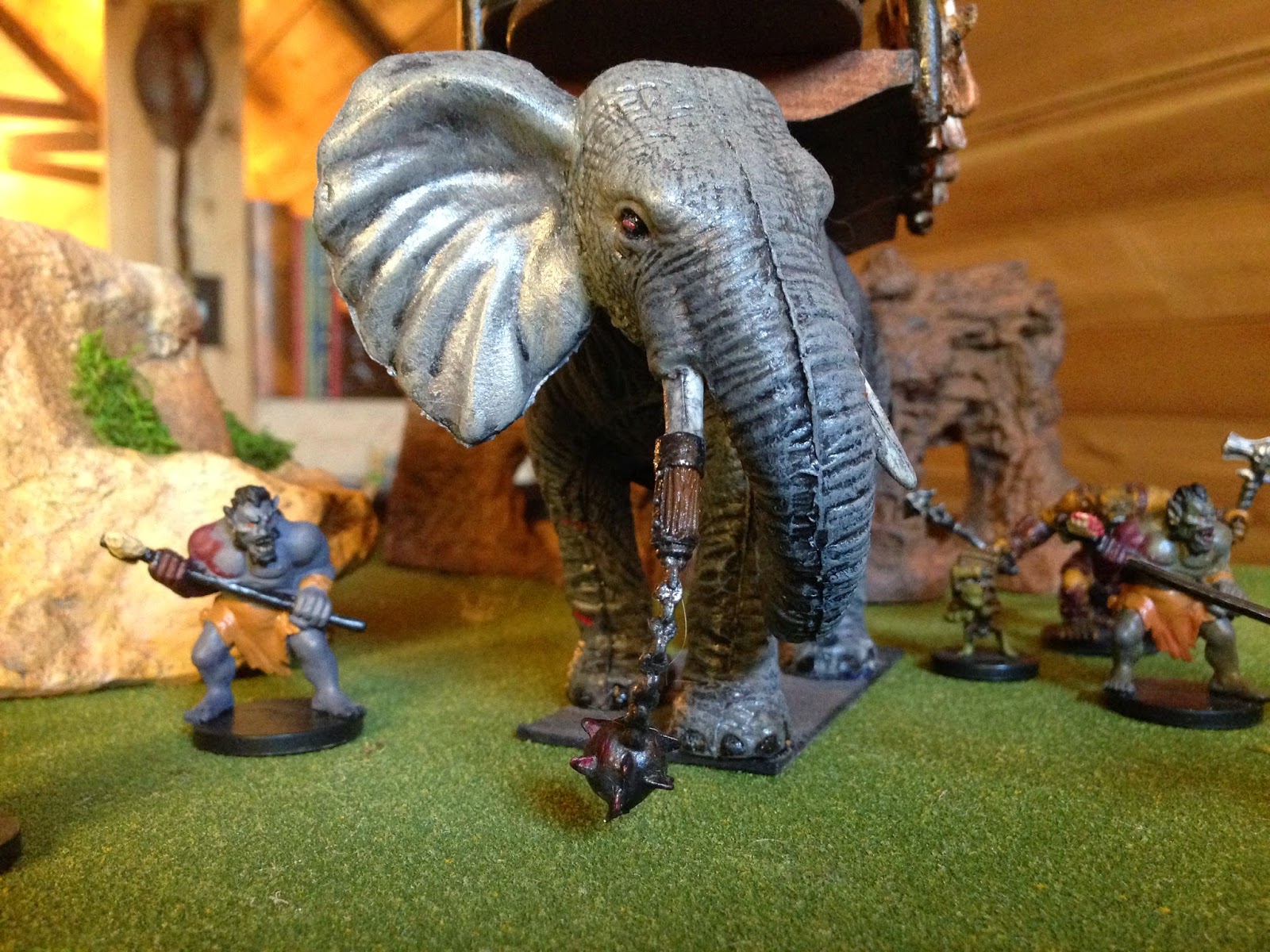 Filing down the end of the already broken tusk, I adhered the flail to its single tip and added the brushed elements of previous victories in the form of small bits of torn tissue and stained blood. Arguably, the hardest part of adapting this creature to becoming the War Beast he is was re-painting both the eyes and the skin.
he eyes were difficult because they simply looked too "happy." While I have a deep love and respect for all animals (most times more than I do people), I did not want this particular Elephant to look at all "pleased" with his current state. A solid black eye, with just a touch of small iris in opaque white and a gloss finish over its sweating, or crying base, added a sense of regret and angered vengeance to his appearance.
Second only to making the eyes look "fiercer" was creating the sense of wetness or sweating from the workload, the abuse, and driving force of battle. The catch was creating this finish onto a simple rubberized-plastic surface without it looking too shiny...tough. Especially on the ears, visible here. All in all, not too bad, but there is room for improvement in future beasts of war I believe. 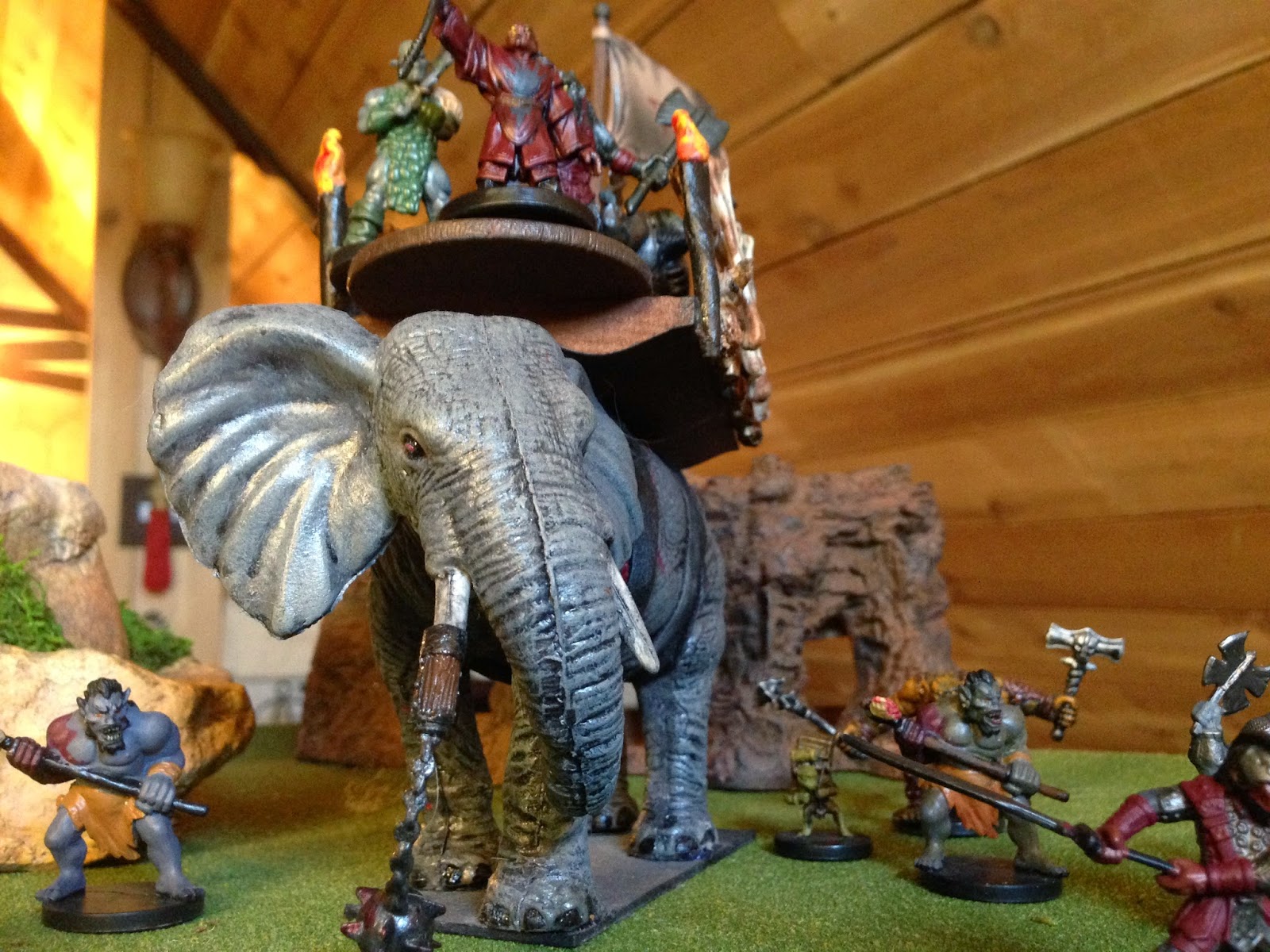 The sides of the war platform are lined with bones and two flickering torches. The bones are disassembled parts of a skeleton decorations from dollar-store Halloween parts. Torches are made from a rolled bit of brown paper over a simple paper clip, adhered together, and then painted black. The flame is simple hit glue left to dry in layers and molded while warm to create a flowing "fire" look. Gloss finish is added to the flame tips of both torches to give the look of flickering light, while small bits of basic brown hemp string were used to line the sides of the platform and "strap" the bones from some previous giant beast or victim onto the platform walls. 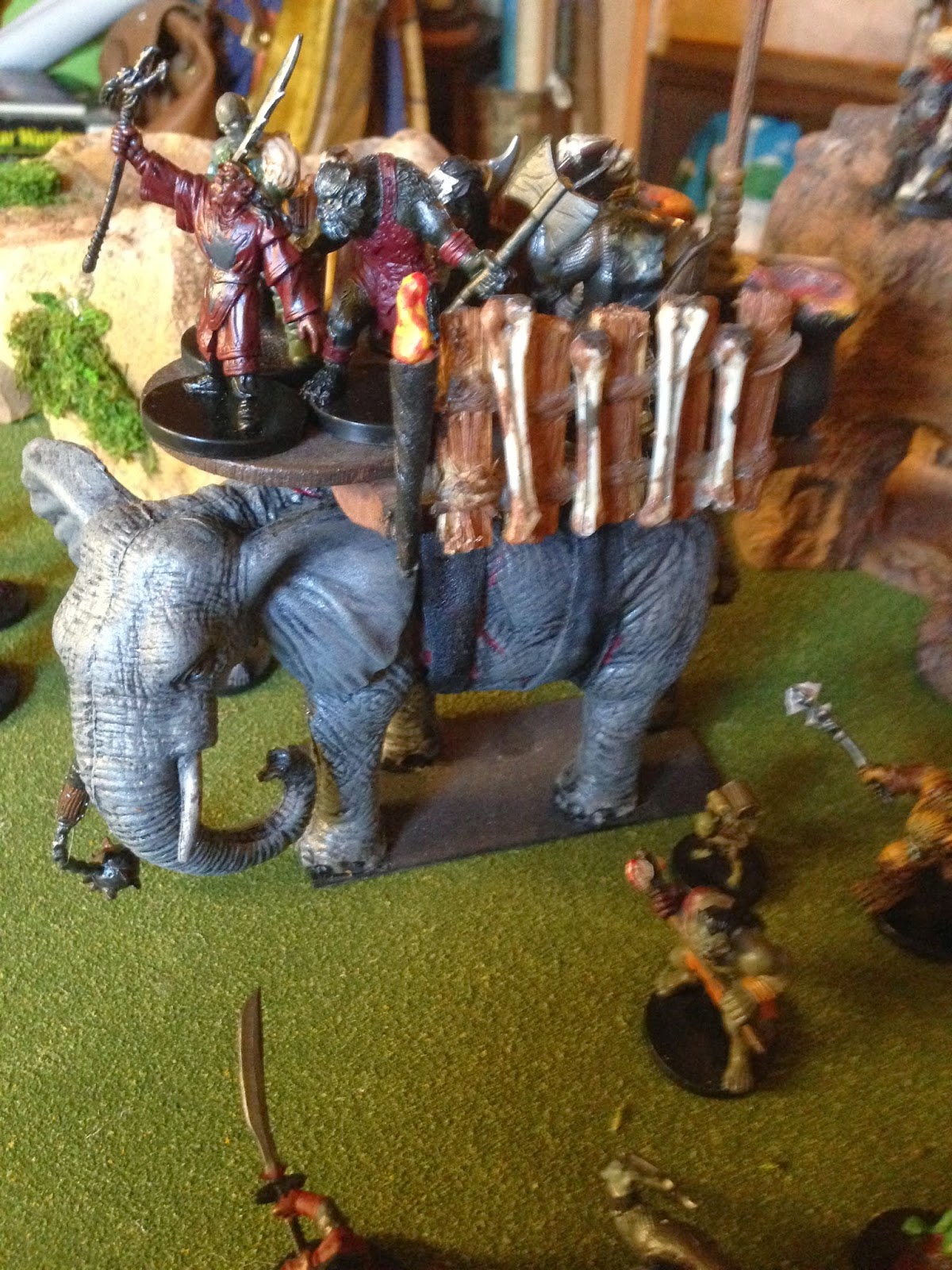 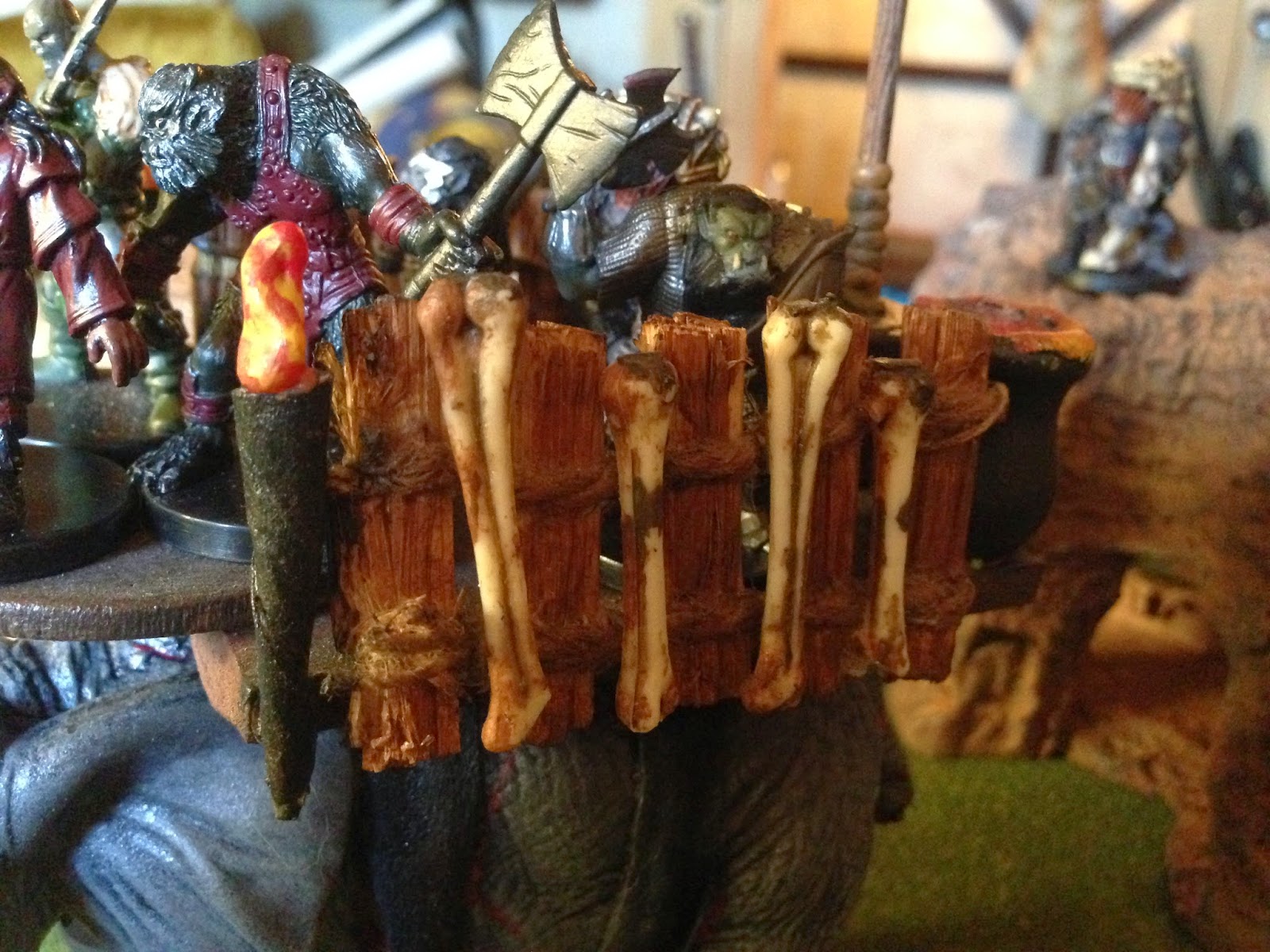 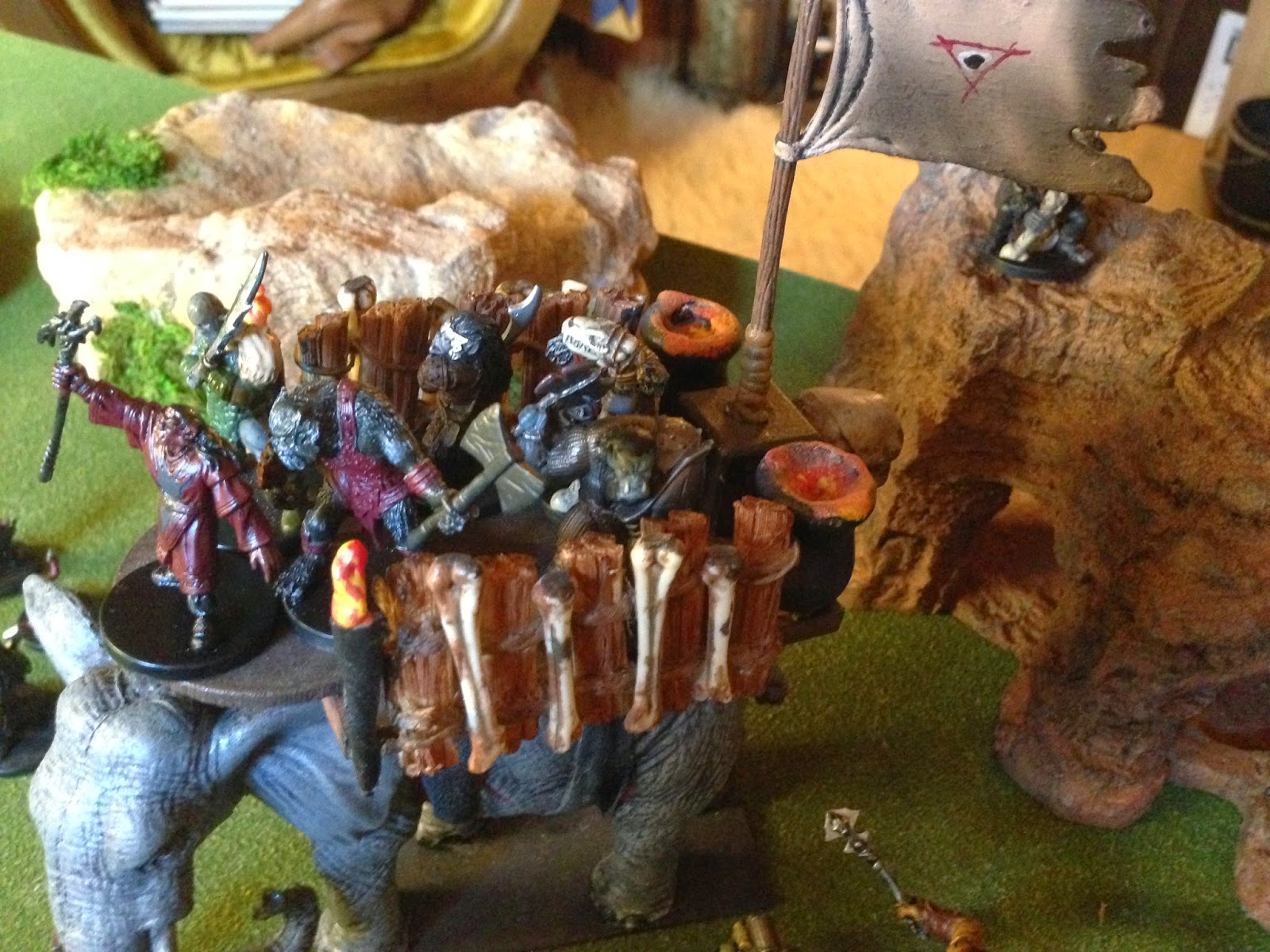 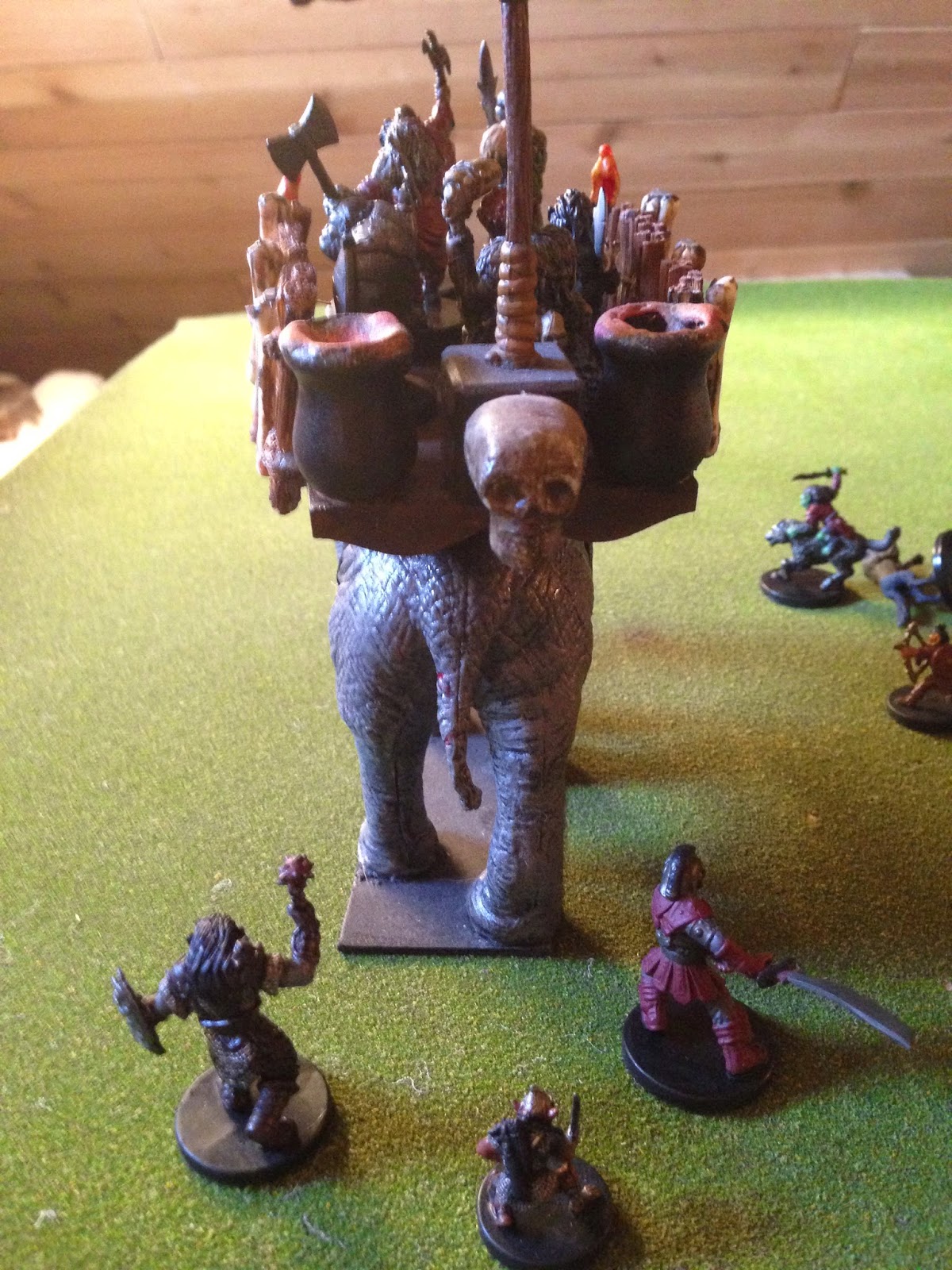 From behind a giant's skull adorns the far of the rack and the banner mount, bordered by two foul vats of boiling oil and flaming fire. Perfect for the Orc raiders to dip arrows in before launching at foes running in terror from the swinging ball of death at the front. The small barrels are simple wooden dowel shaped drawer pulls, turned upside down and painted as black cauldrons. Total cost for a bag of 12 at the local big box hobby store was I believe, somewhere in the range of only $2.00. 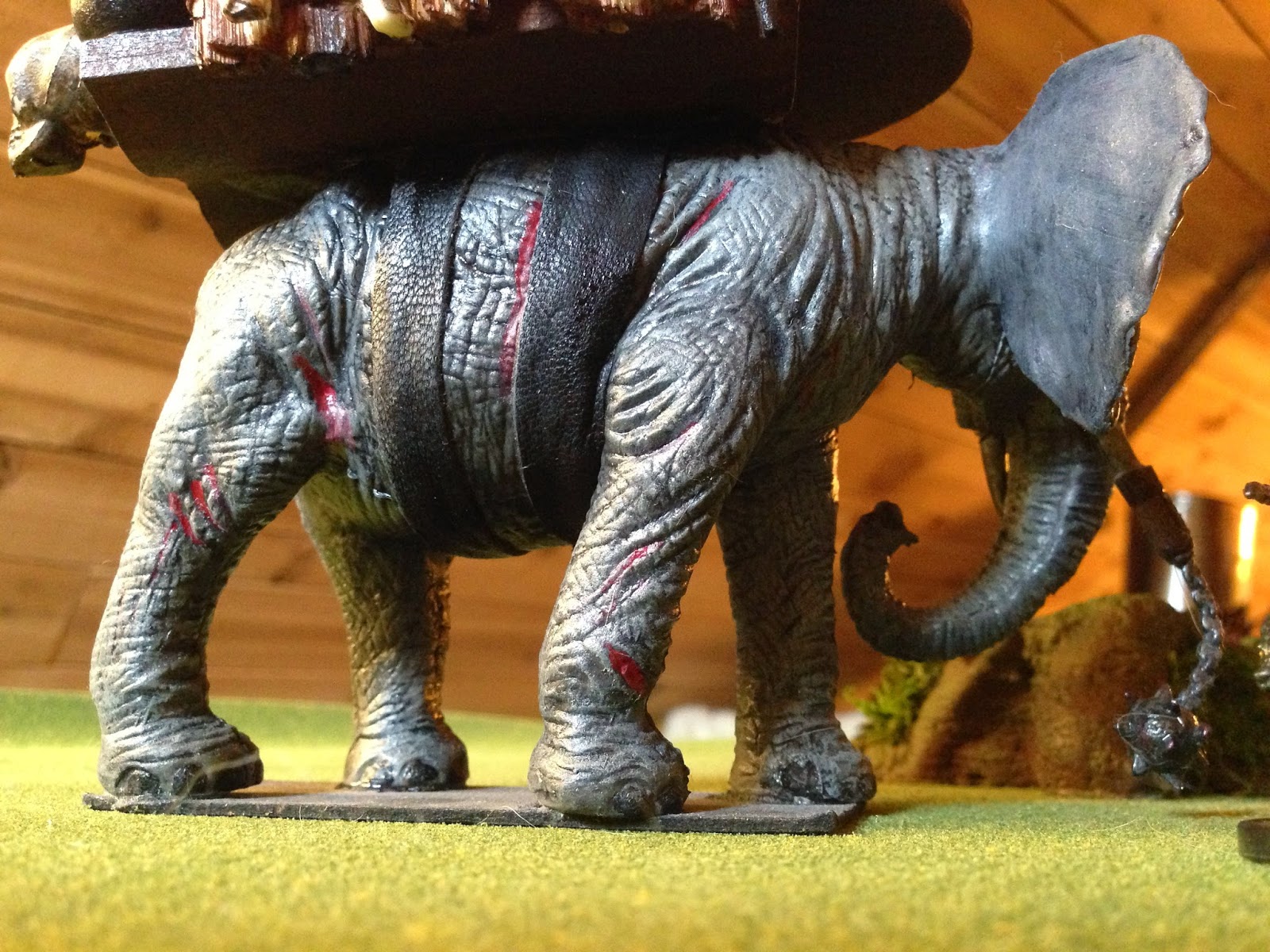 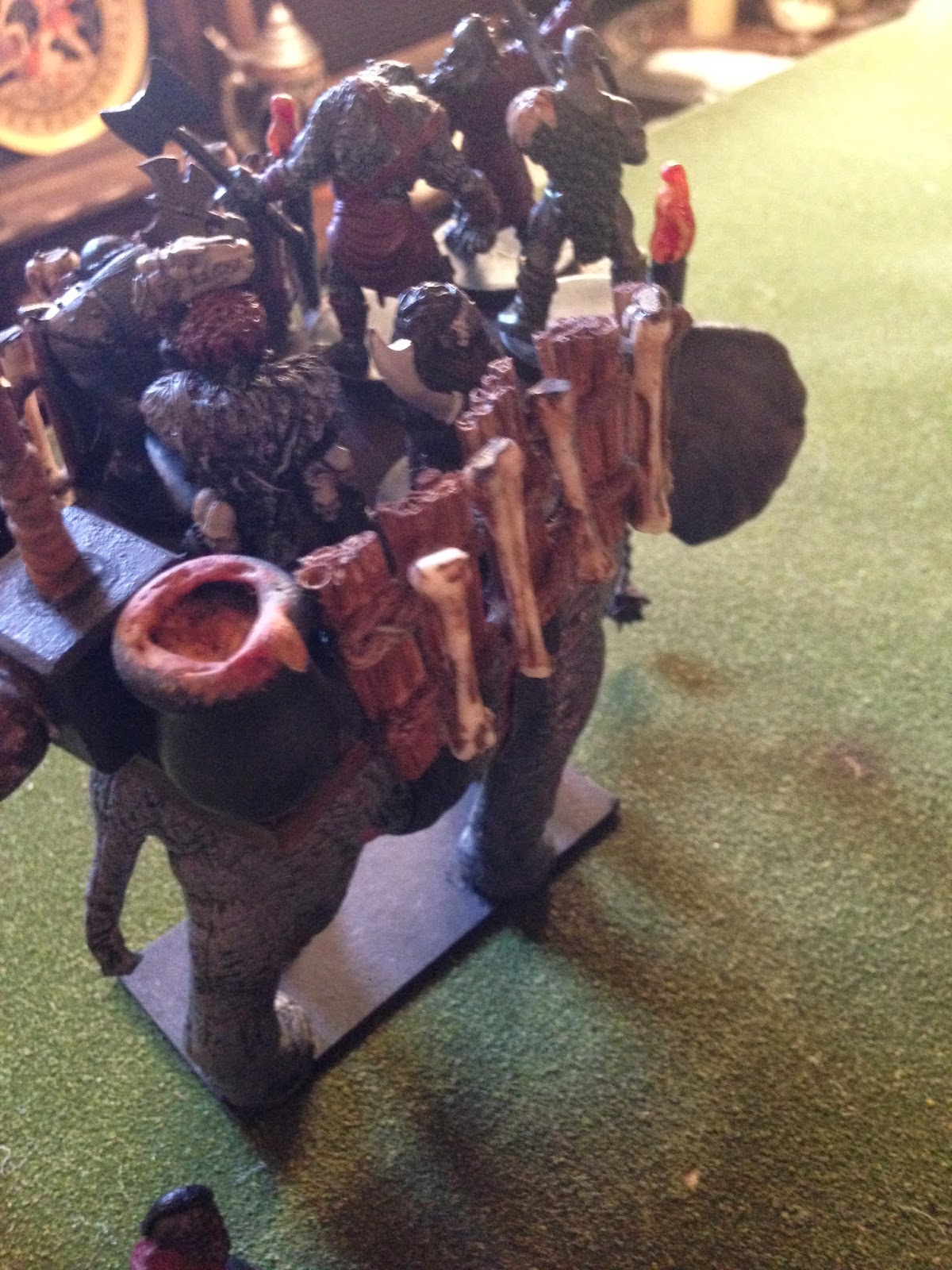 Another area that was tricky was creating the sense of "structure" to the War Elephant.
The platform was made from simple balsa wood with a round wooden front, almost like a jumping platform for dismounting orcs. Two leather straps were fixed from under the platform and around the mid-section of the beast, and cuts, scrapes, wear and skin abrasions were added to give the look of cruel and unusual punishment and abuse of their mount. I don't imagine Orcs being the most beloved of animal handlers. I also wanted visible signs of war damage from areas where mounted enemies could reach with arrows and spears. 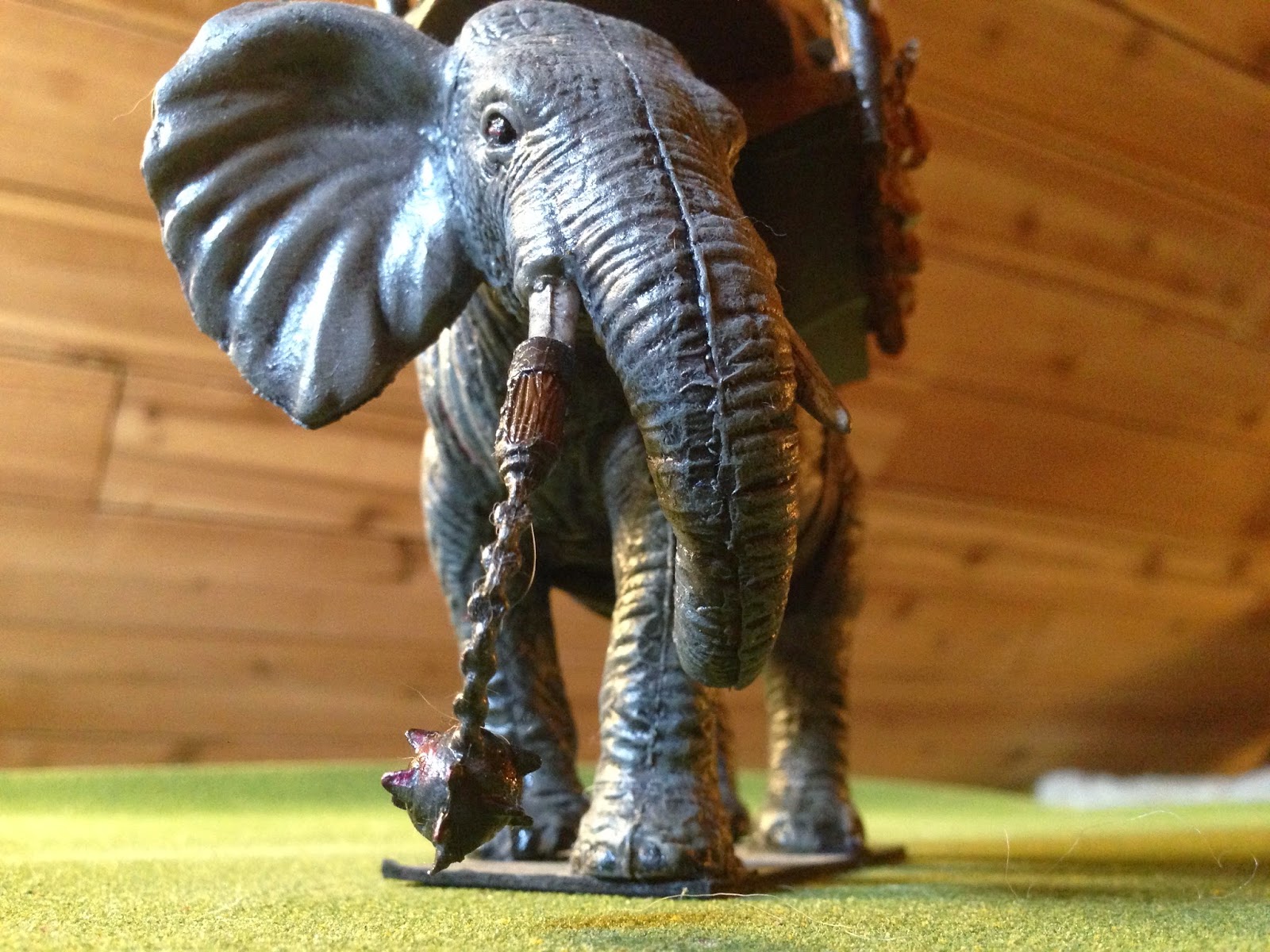 Th dreaded Orcs of the Black Eye War Elephant is a ferocious sight for any tabletop role-playing adventure group, and took first place in the 2010 conduit Convention large modified-miniature creation category.
To this day, however, this poor beast lacks a name....Suggestions are welcome and appreciated.
What is a worthy name for such a massive Orc war beast?

* Next, updates on award winning miniatures of a Gelatinous Cube, a Water Weird, and...a bit of human skin....sort of....