Gelatinous cubes and the nostalgia of the Water Weird... 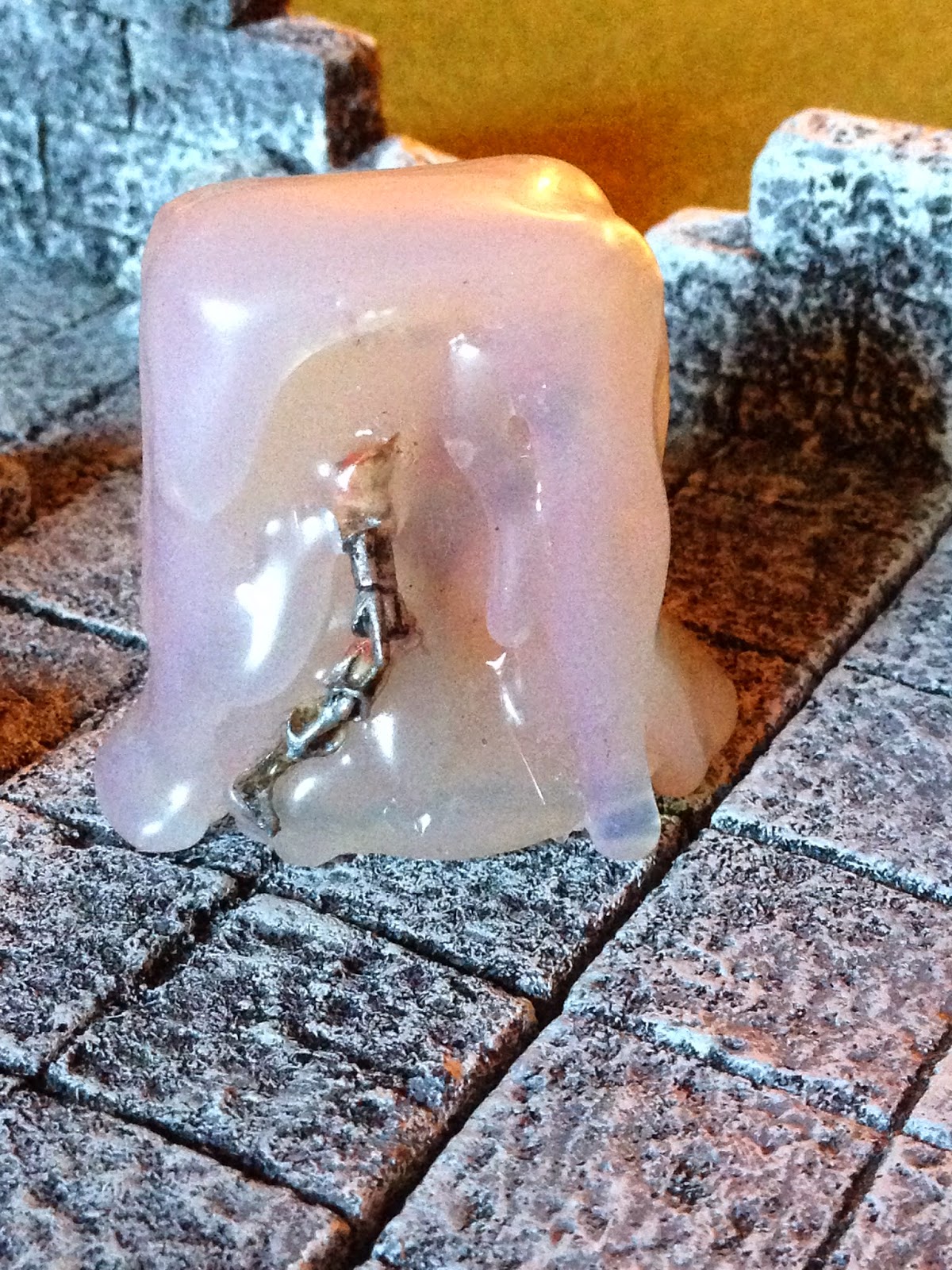 This is one of the first gelatinous Cubes I attempted to create myself, and it won First Place at the Conduit Convention Miniature category.
This is a clear Gelatinous cube, but with a half-dissolved adventuring victim in it's grasp. the poor soul was unfortunate to be brought into this world as part of the Horoscope line of miniatures, and as a result, his base was both too big, and too green, to match my collection of Wizards of the Coast branded Dungeons & Dragons minis. that meant only one thing...Death by XActo knife.

A moment of silence for all those poor plastic should who met their demise at the hands of my twisted gamer imagination....
Ok thats plenty.

Finding a small clear plastic box from a bicycle tire repair kit, I found that it was nearly the perfect size to use for an encounter with 25-28mm miniatures in a table-top RPG environment. I first covered the main structure with about 7 layers of alternating temperature hot glue. The key here was ensuring that despite alternating temperatures to give depth and layers, that the glue was all of he same color, mainly clear rather than the yellowy finish some hobby store glue sticks come in.
As the 4th layer was slathered on in waving drops, pre-painted limbs were inserted halfway into the under layers leaving only the rotting and exposed armor of what was once a leg and an arm visible.
The advantage here is that with multiple layers of glue to embed the "victim" into, portions show through, giving the eye a sense of even more depth and interior to the figure.
As a result, the smaller, more nimble version of the Gelatinous cube was born. 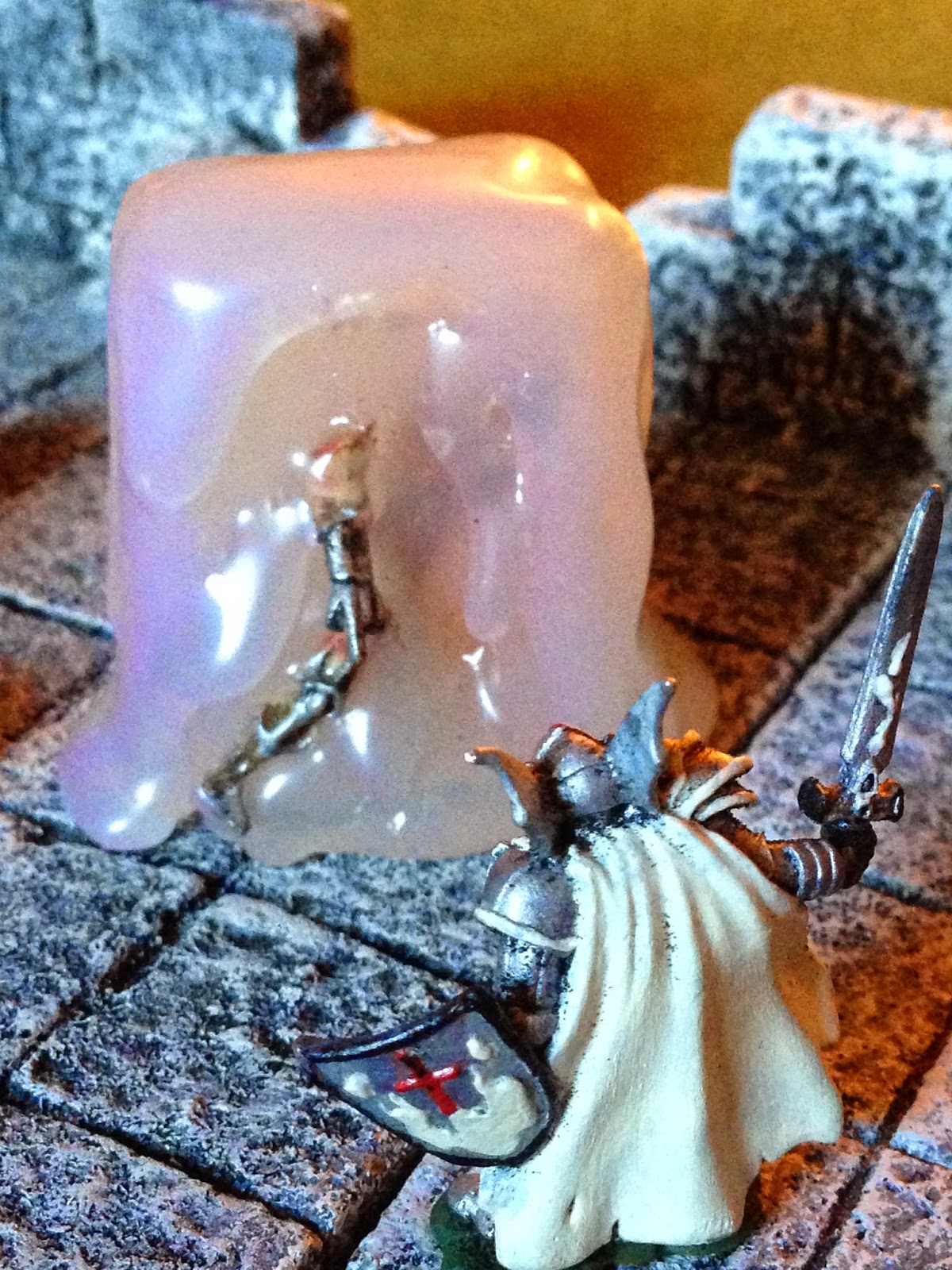 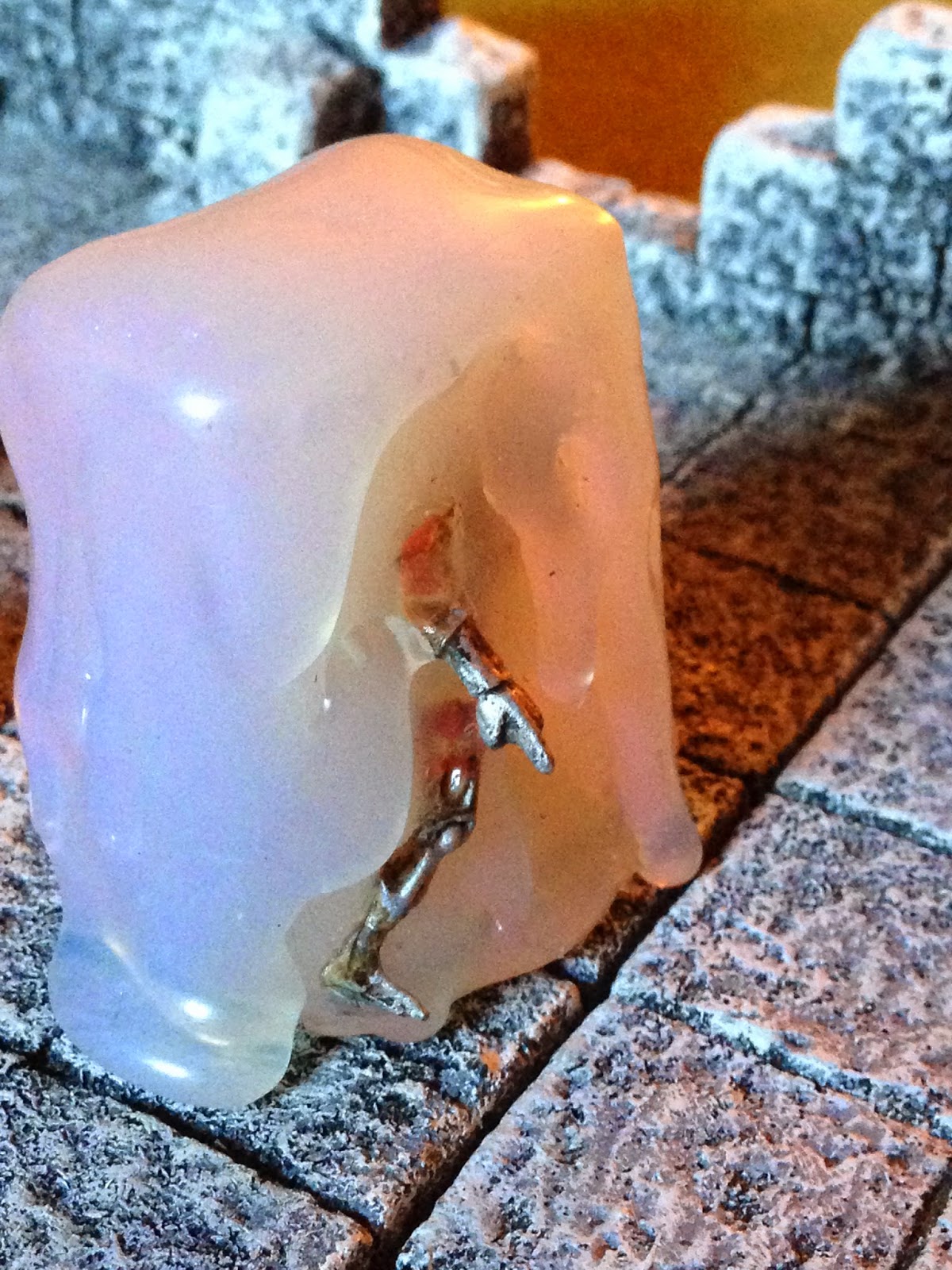 My first encounter with a Water Weird was courtesy of Rose Estes and TSR in Dungeon of Dread, the Dungeons & Dragons Endless Quest Books. this was D&D's answer to the Choose Your Own Adventure books from the early 1980's. I still own every single one, and occasionally, much to the dismay of my wife, read them now and again. But this one, above all, was my favorite. 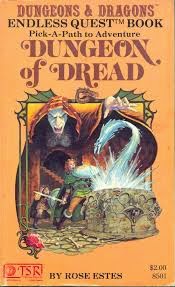 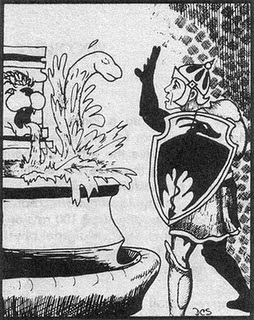 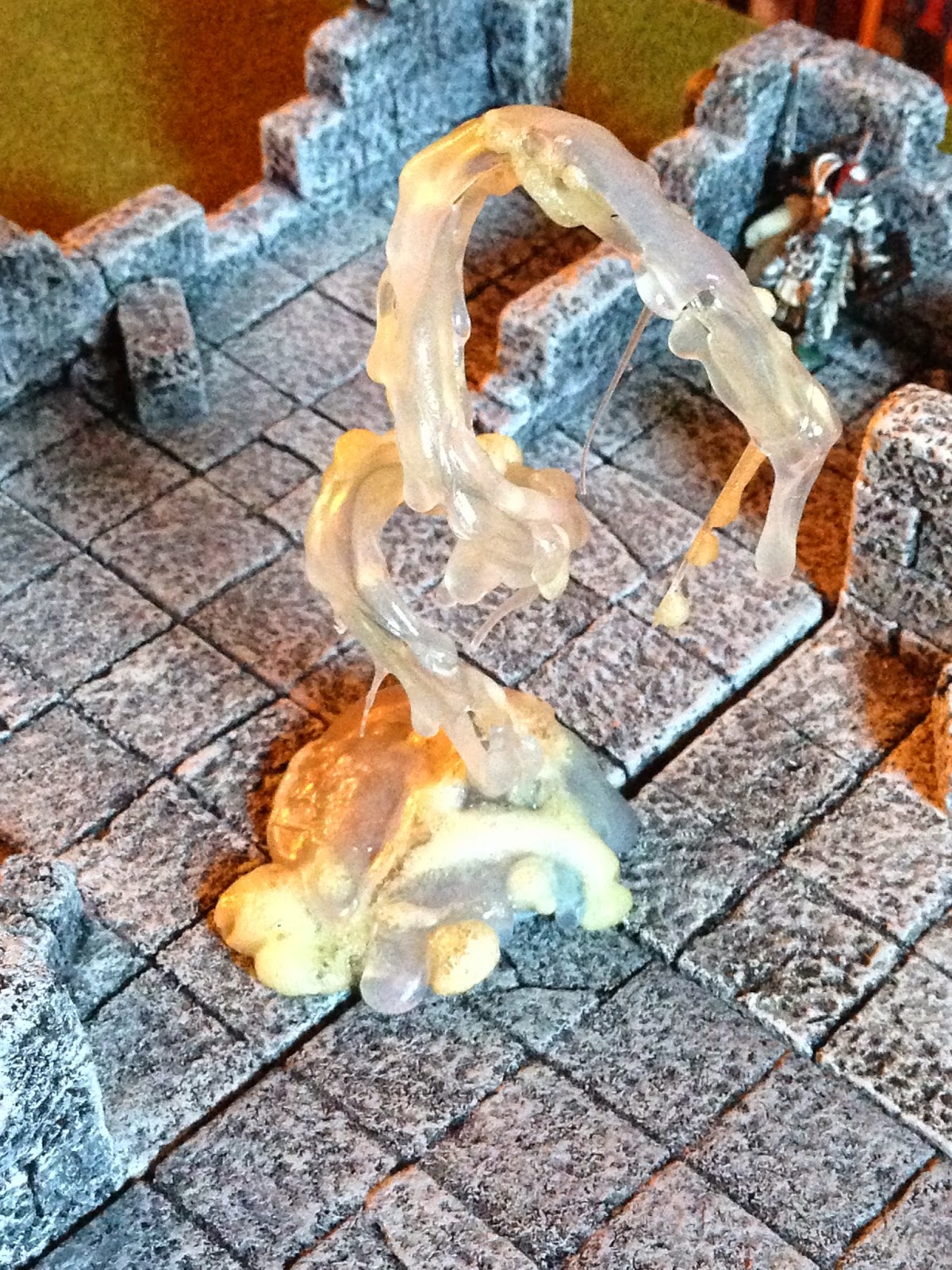 The Water Weird, a form of magical created Water elemental, was something I have never ever found a proper miniature for. And through experimentation with various epoxy's, a bent wire armature, and a bit of luck, I ended up with an award-winning water weird that captures the strange imagination this creature held for me over three decades ago.


I started by applying hot glue in layers over a wire frame, and while I would normally want to hidde this, the silver of the frame slightly showing through actually added some visual depth to the creature, almost a sense of sparkling spine or backbone. Allowing the glue to drip in its natural layers, and cascade down the frame in smooth flowing rolls added the sense of real "water" to the creature. And while the version from the book had a very "feel-like" face and mouth, I wanted mine to more resemble the alien water being from the 1989 film The Abyss:

The base was a layered pile of heated and cooled epoxy glue, with an added effect I had not originally planned for.
When Gorilla Glue is added in small doses to the heated hot glue epoxy, the result is a bubbled mass of almost "foam-like" glue that hardens in the form of foaming water. Water features, pools, puddles, and ponds have never been the same since. Here is the only problem with this mixture:
It ages.
It does not stand the test of time as well as standard clear hot glue. As visible in the photo here, the foam is starting, even after only about 5 years, to yellow just slightly. This all of course could be fixed by adding a layer of color to the final version as well. It is only when left its natural "clear" state that it begins to show this sign of aging color ever so slightly, and the sun coming through the window at photo-right did not help to de-emphasiz this either. 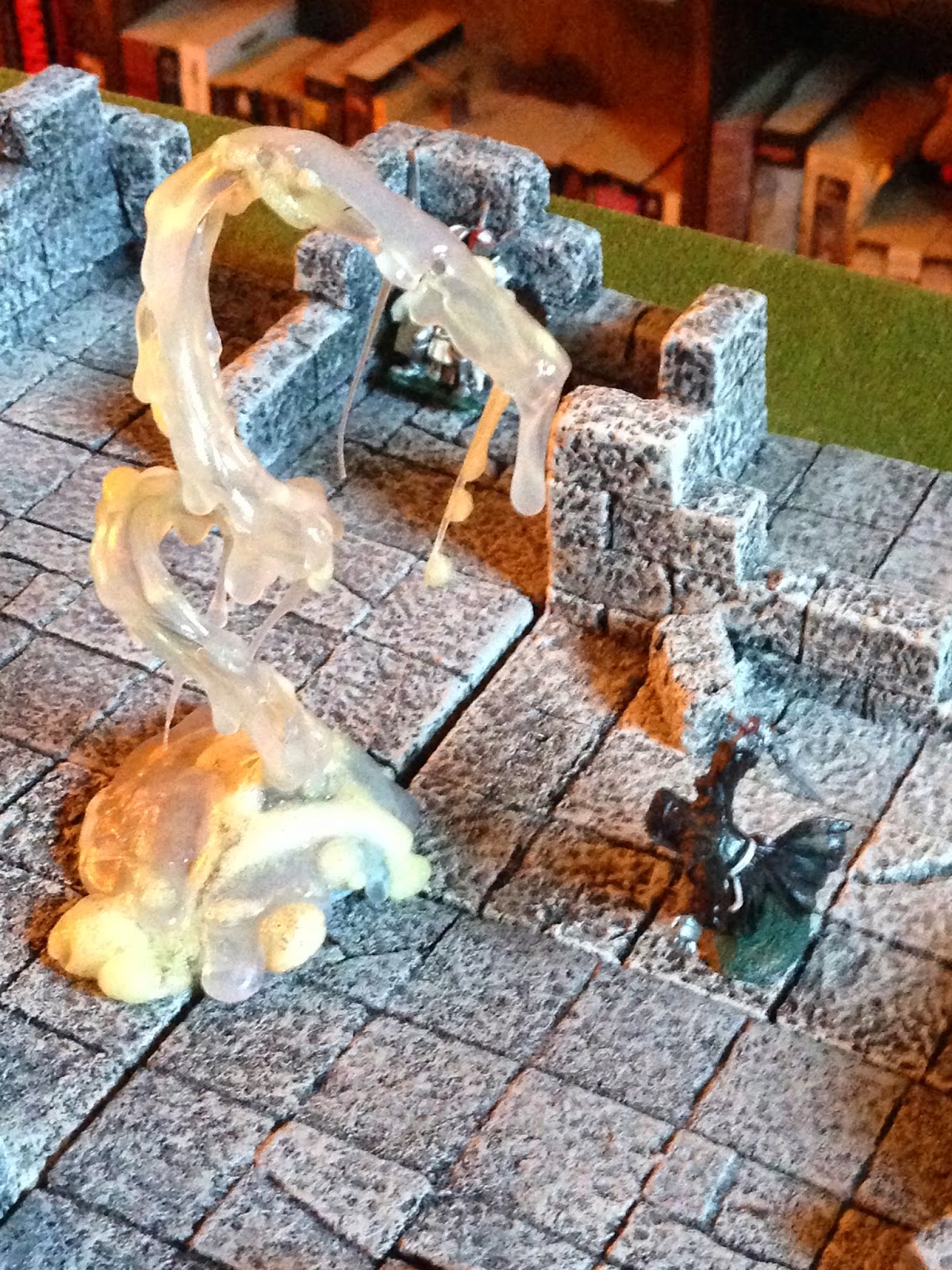 When placed against a standard RPG 25-28mm Player character mini, however, the Water Weird really comes to life. Its relatively easy, low cost, and fast production made fro a fairly large scale creature that is impressive and unique on the game table, and a real treat to bring upon unsuspecting parties of dungeon delving players.

I hope this sees some play again soon. Poor lil' water weird is starving for some new blood...