The priming continued this weekend with the completion of a whole gaggle of Sci-Fi Terrain.
Finished painted pieces may appear at a  later date, but primarily for now this will detail individual ideas and inspiration for construction.

The names are completely arbitrary of course, but I tend to go for a slightly less "doom and gloom" view of the Warhammer world. Think more "Warhammer meets Star Wars" so much like the lines and accessories here, I try to allow the terrain to take on a slightly more clean look too.

The key in sharing these is the potential in their visual identity:
Find items that look like they have a purpose in the Universe for which you are creating-regardless if your entirely sure what they are or even how they work.

These are just brief tutorials on what went into the make-up of these pieces, but further posts will (hopefully) follow as these pieces have all been sent out for some volunteer custom paint work by contributing Dungeoneer artists who will be contributing to the Creative Dungeoneering realm with their talents. More on their progress to come... 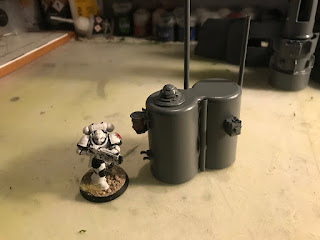 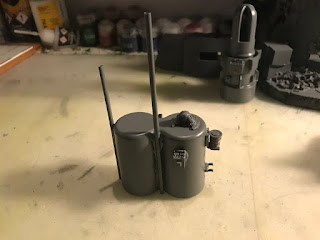 This was assembled with standard white pva glue, and comprised of a bar-end cap from a set of roof top Yakima brand bike rack bars, the stub of a space marine torso from an old Rhino tank, two white plastic coffee straws, and a few random plastic bits torn from an old circuit board (see last post on Sci-Fi terrain).
The real key here was the varying level of the straws serving as 'antenna' that give the piece a functional look. The small coil on the side is actually a roll of copper wire from the circuit board, so this should add a nice touch of realistic metal once completed. 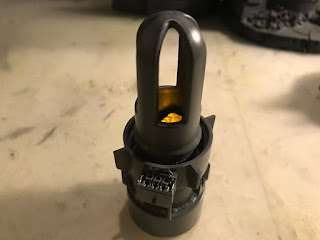 Beacons, industrial tubing, old spacecraft parts...whatever your imagination comes up with. But when you prime sprinkler parts, and what I think was some form of 'juicer piece' the results are something right out of the 41st millennium.

The beacon to the left was made with a sprinkler part from a local hardware store glued atop a small led tea light. Tinfoil was placed inside to reflect the light and give it a slight flickering glow like fire. 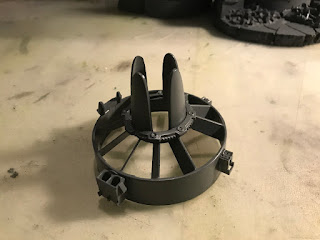 This bottom piece is some previously saved and currently un-remembered piece of unknown plastic, but with one odd catch: It's either REALLY expensive, or...not.
the ring around the spires is the metal watch face lock ring to a TAG Heuer watch. yes, THAT TAG Heuer. But since I purchased this off the street in Jakarta Indonesia from some shoeless kid on a broken down scooter, I can't say if it's real or not.
I can say that when I took it to a jeweler a while back they wanted to charge me $75 for the battery, so rather than divulge that I paid 41,253.00 (Indonesian Rupiah, so like $3 US), I kept it. Does that mean it's real? Who knows.
After he got my three bills he was off on his "previously claimed to be broken" scooter faster than lightning. Good story...mediocre watch. But it makes great war game terrain! 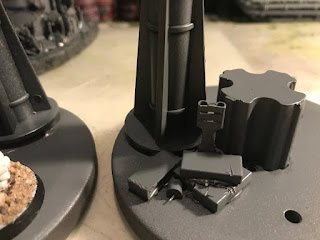 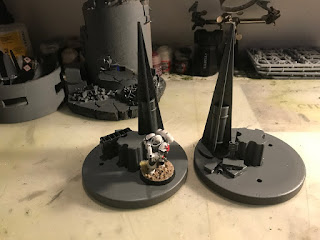 These are similar to the Planetary Beacon above in that I have no idea where they came from, but they made excellent terrain. Parts for the stockpiles of materials being waited for transport are random bits from the electrical motherboard I pulled small "greebles" from previously. The cones and base are odd plastic affairs with no remembered identity. 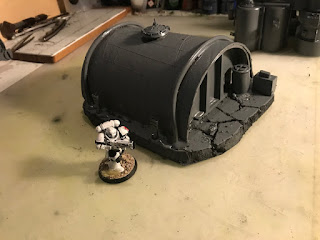 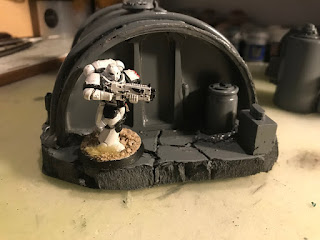 This is constructed from a cardboard tube cut in half and fixed with wires and a small Warhammer tank hatch from a previously unused section of Rhino.
The base to which this is fixed is a thick foam-core used in advertising signage, but any reinforced cardboard or foam core will work. The advantage of the foam base is the ability to not only "sink" accents into the ground, but also to give the ground a surface of it's own.
The tanks to the right of the entrance is actually a small cell battery, primed and inverted.
For the door accents I used a small plastic square piece that accompanies bicycles upon purchase to hold the cassette into place. Most bike shops will discard these when building bikes, or likely give them away for free, as they are unlikely to associate much use for them in the role-playing or creative gaming world. It's rare that these two realms ever mix...

Ruined Tower
The other half of the cardboard tube that was used for the Command Bunker above was utilized to make  ruined tower and the small guard walls.
Additional metal greebles and electrical parts were stacked on top of a foam core base along with various small parts and random bits to give the look of a dilapidated and crumbling tower.

Notice here how primer was laid on extra thick. 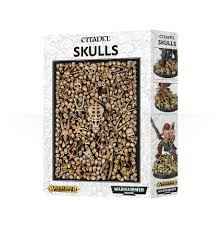 This was done on purpose to allow the paint to seep in and cover the metal. It needed to be thick to cover the visibility of the pieces being modern (or mundane), but it would also allow for some variance as this will primarily be dirt, dust, rubble, and old foliage.
Additionally, those gaps where the paint is at its thickest will be filled in with pieces from the Citadel Skulls collection - highly recommended for a adding some dark battlefield doom to your terrain. 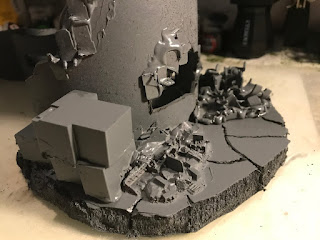 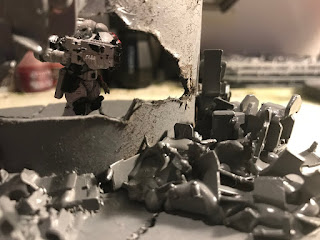 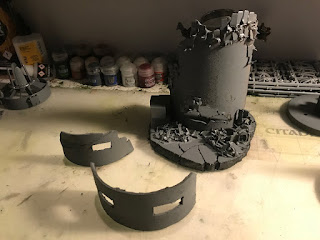