THE CRATER PLAIN BATTLE BOARD!

While similar in design (and construction) to our previously designed modular gaming battle board, the Crater Plain version we created here is quite a bit larger.
A larger board is not necessarily always a better board however. And often times it can present too much terrain and distance between armies for initial set-up.

When being used for war-game play (such as in Warhammer 40K), timing can be slow, and take hours for rounds to complete. This is less of an issue when being utilized for role-playing terrain, and serves well for adding large scale modular additions such as mountains, cavern accents, and hills and mounds. 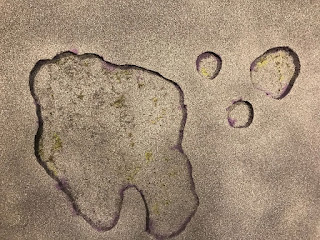 The goal of the Crater Plains board is to provide a few notable and useable features for Sci-fi table top wargaming or role-playing, or serve as a basis for additional role-playing/fantasy use. But it's crucial feature its both its size and its emptiness, or its lack of features!
Space-as in empty space, left bare, flat, or without additional features serves well to a dd additional features on top of, so this board needed an ample amount of surface area from which to build future expansions, thus ensuring it was truly modular.


The main features of the base of the board other than the stone textured finish are it's 4 main craters.
I started this board in our standard secret black foam core (1/4" thick paper-backed foam core or 'gator board' often used in the advertising and design industry) and carved the craters into the foam but not through the paper on the underside. 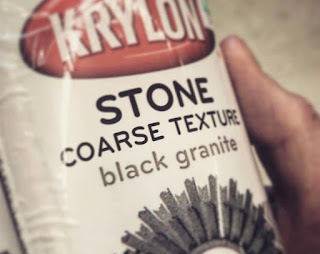 After this was completed, lightly sanded and smoothed out, the entire board was coated in two full cans, evenly and SLOWLY sprayed over the entire surface, using Krylon brand Stone texture paint in Coarse Texture Black Granite. The 'Black Granite' is really more of a gray and white speckle, but works well given the foam core itself is black. But for a board of this size it did in fact take two full cans-not the cheapest method, but the best long-term.

The key with texture paint is two factors: Warmth and Wind. Try to use it in a warm (or room temperature) location if possible, not outside in the cold. And NOT in wind. Any! Not even a slight breeze. This means indoor use is the best but the smell of this can be quite pungent, so just the right conditions for a space this big is crucial.

Once sprayed and dry, the small-detail edge painting began. And this is where Fantasy Geology comes in.

Because I wanted the craters to look real and like they had some actual purposeful growth or algae forming from within, I paid close attention to the cracks and crevices on which paint was applied. Only placing small dabs of dry-brushed toxic green over raised surfaces like a growing alien or deep cavern mold of some unknown variety. 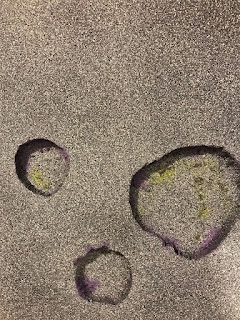 For the purplish hue on the edges, this was applied using a dry brush technique of dabbing an old brush lightly into a deep purple acrylic craft paint, removing excess on the pallet, and then in a swift dabbing, semi-rough maneuver, allowing just a tiny bit of paint to settle into the stone surface texture along raised edges of the craters and where cracks formed onto the surface.

This gives the look  of an alien growth or crystalized algae of some form creeping over the lip of the crater and through the small cracks to the surface. For final preparation I may be adding a dab of gloss varnish to these areas to give the looks of natural crystals, but keeping this board minimal in its design, allows for multiple uses and potential areas and genres it could be used. 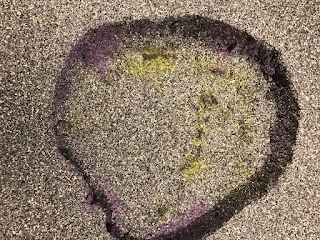 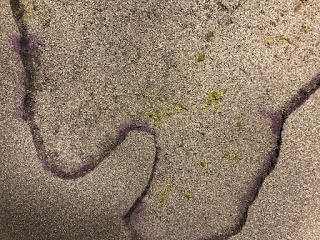 NEXT:
Finishing the board, sealing, and final touches......
Now, back to the icy depths of the great northern catacombs, where the Polar Bear army is getting restless. Great gaming terrain is only as good as the adventures that take place upon their surfaces.....