The Ruins of Khaz Caleigh

Deep in the underearth of Flannessia lies the ruins of the city of Khaz Caleigh.
Unlike many other Dwarven cities that span this vast region of the Ered Ethlu'n mountains, Khaz Caleigh fell not to some unearthed horror, or dark sorcery, nor even to internal struggles, greed, or political in-fighting so common amongst Flannessia's Dwarven city-states.

Khaz Caleigh fell simply to a game of Steiss. Well...Chess.

After eons of cold, but mutually self-serving relationships with the Dark Elves of the region, relations had grown to such a mild degree that the King of Khaz Caleigh had established occasional communications and emmisaries from the Dark elven kingdoms of the Flannessian Underearth region.

It was on such an occasion that the Dwarven King Durndwallin the Third, hosted the Lord ruler of the nearby Dark-Elven city-state of Zenrothrawn, ruled by the leading house council of Alezurn.
Lord Alezurn, like all Dark Elves was well versed in the game of Steiss, similar to what we in our world, would refer to as Chess.
Steiss was played by great rulers since time immemorial, and carried with it such weight and pride that entire kingdoms had been won and loss, entire populations destroyed, and if you were playing with the Orken lords of the northern Drythenblue steppe's, eaten, over single games. It was believed that with the movement of the individual pieces, came an arcane magic unfurled, bringing into formation the very fates of the Gods, thus deal in life what is dealt in Steiss as the saying went.

Late into the night, Durndwallin battled against Alezurn, while their small retinue's of soldiers watched on in silent distrust, hands never straying from weapon hilts, each ready to pounce at a moments notice and bring death upon their sworn blood enemy, despite the recent warming of relations amongst the two kingdoms.
Much Dwarven ale was consumed, and the Dark Elven wine made of the Deathcap mushroom had long been exhausted. And it was in this frustrated, angered, and silent haze of the early morning hours, when their watchful guards had all but slipped beneath the veil of sleep, that the two Kings battle on the carved wooden battlefield of Steiss came to an abrupt, and quite tragic end.

Now, some say that his hand merely slipped in a drunken stupor, others say it was a failed attempt at a subtle cheat to end the hours upon hours of politically infused gaming, but either way, the slip of Durndwallin's wrist which moved his piece ever so slightly, so infuriated Alezurn, that without stopping, Alezurn immediately drew his dagger, and with the speed only the Dark Elve's possess, sliced Durndwallin's hand completely from his wrist in one violent arc.

Blood splattered over the board as Durndwallin screamed in anger and agony at once, immediately arousing his guards who, with axes and swords and spears drawn, charged into a rage.
Alezurn did the same, leaping over the table and thrusting his dagger deeply into the throat of the Dwarven King, relishing in the carnage and slaughter as he drove the wicked Drow blade deeper and deeper, nearly removing Durndwallin's head in a fit of slaughter.
Amidst the chaos, the Dark Elves scrambled, their blades acrobatically finding their mark as they relished in the melee.

Ultimately, the Dwarves of Durndwallin prevailed, destroying all in the small Elven retinue but Alezurn himself, who fled the city by dark ways. And upon returning to his own Kingdom, the Dark Elves waged a war as of yet unheard of in Flannessia's Underearth.
Their armies assembled, and with them, their scores of massive Purple Worms; ridden and driven forth by the Alezurn's armies; slaughtering and feeding and dissolving with their great acidic-blood all that lay before them. even soul in the great city state was destroyed, and not one slave was taken. So great and terrible was the utter destruction that it is said the final Dwarven head was severed after nearly two full weeks of siege.

So great was the slaughter that even the very walls of Khaz Caleigh can still be seen marked by the dissolving acid of the great worm beasts. The few remains not devoured entirely or slaughtered and eaten, lay scattered throughout the vast city in barely recognizable clumps of fading bone and pock-marked acid split skulls.
To go there now is to witness what might have been, to see what two races may have had, and the greatness that was once the architectural craft of the Dwarves, now lost to the ages. It's violent end only visible in tiny clues strewn about crumbling halls.

Constructing the Ruins of Khaz Caleigh:

The ruins are made from standard 'pink' insulation foam, found in board sheets as small as 2' x 2' at any local hardware supply store or home improvement chain.

This is cut and sanded lightly, then formed to a rough shape before the scoring begins with a simple stone. Every edge is roughed over with a sandstone rock I use specifically for this purpose, and then finishing the edges is done by two tools;
The Woodland Scenics brand foam cutter and a Styro-Cutter Plus foam craft tool. 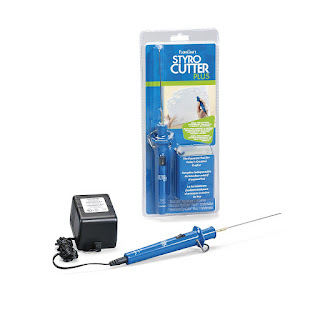 The Styro Cutter allows smaller details, edging, and carving runes and glyphs, although even this can be tough to get too fine of details with. This also works well for holes, cracked edges, and small cuts and scrapes.

The main foam cutting tool utilized to gather larger pieces, stone bases, long edges, or more natural cut-stone slabs is the Woodland Scenics brand foam cutter. This has a long hot wire that allows larger more even cuts and works well for creating a more liner stone slab look or long straighter edges like the columns and archway edges of the gateway entrance made here on Khaz Caleigh. 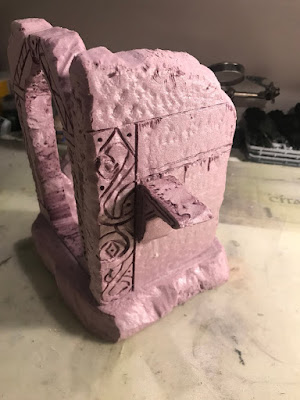 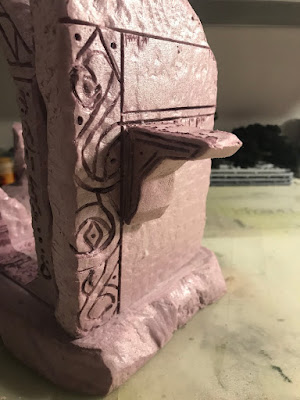 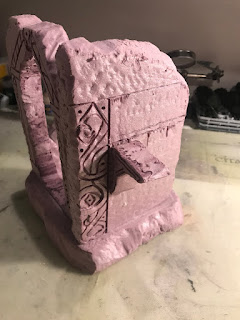 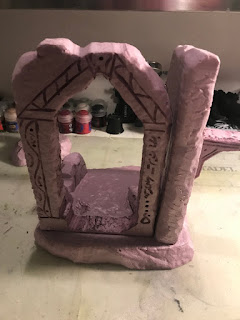 Once the foam was cut and styled, the glueing process began. I used standard PVA (Elmers brand Glue-All) and pressed the pieces with clamps and weights, allowing them to sit for almost a full 24 hours overnight.
Once they felt solid enough to handle and move around, I moved on to the priming stage, which was done entirely by hand to achieve a more dabbled and rough stone-texture look.
I typically use stone-texture spray paint, but the aerosol dissolves foam, so a hand application needed to be applied here. 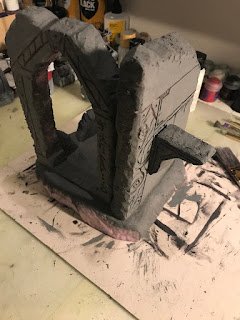 This actually worked even better, as it allowed me to get the basic gray craft paint into the cracks and crevices of the runes and knot work carvings of the outer wall. Because the foam starts as a pink color, it shows up quite well where you miss, so getting the bristles into the cracks is imperative, and also makes ensuring the glue is solid and completely dried crucial as well as the foam will be taking a bit of abuse and movement to capture the dabbed stone finish. 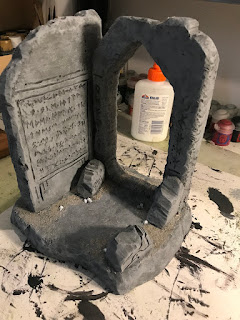 Once three layers of shaded gray were added in different depths and textures to give the look of stone, and highlighting with a soft white-gray on the dry-brushed stone edges was complete, I added a bit of random sand to the edges.

This gave the look of gathered dust, waste, garbage, and general dirt, and aged uncleanliness.
Lastly, Ia dded a few randomly placed skulls from the Games Workshop Skulls scenery pack to the edges as subtle hints and clues about the violent and gruesome history of this dreadful place. 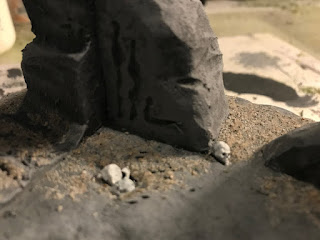 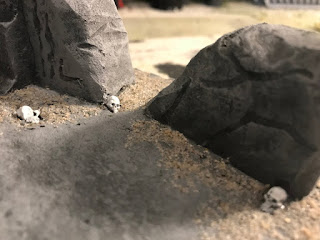 The finished look is perfect for a Lord of the Rings style Moria stand off, a D&D Faerun Underdark or Flannessian Underearth campaign, or even if filled with foliage and trees, a crumbling forest ruin. Modular, multiple uses and locations, and fun to build. 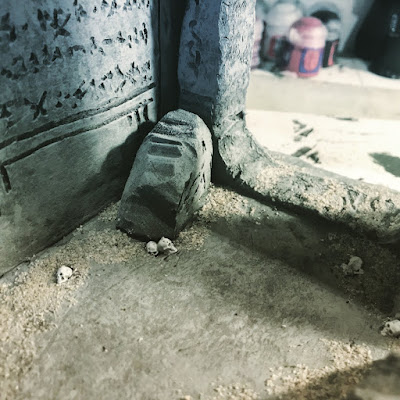