I read this fantastic post today from Kotaku.com titled
The 13 Strangest Deities In Dungeons & Dragons
http://www.kotaku.com.au/2016/03/the-13-strangest-deities-in-dungeons-dragons/)

This was a hilarious write-up on some of the quirky details of D&D's pantheon of Gods. I can't help but think that coming up with details on the Gods has got to be one of the best writing gigs in the Wizards of the Coast/Dungeons & Dragons real-world. But it made me think a bit deeper too. Like reflecting on how, and why, I have always been apt to use ALL gods from ALL lands in my campaigns.
Yup. All of them.
But here's why.... 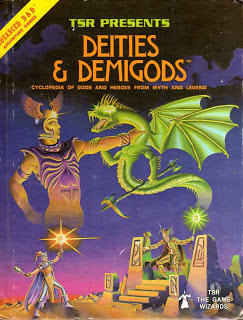 My first D&D book ever, was not the Players Handbook, the DM's guide, or even the Monster Manual. I checked Deities and Demigods out of the Library when I was probably 9 years old. Maybe even earlier. I, like any kid, picked it up because of the artwork and what details I could make out on each inside. I distinctly remember this first checked-out version containing something I couldn't pronounce either, "Cthulhu Mythos" and had I known then what I know now, I'd have probably stolen it....
But all the way through D&D, AD&D, 1st edition, second edition, 3rd, 3.5, a quick dabbling in 4th, and now, 5th, I have always looked to Deities and Demigods as the standard for all gods and evils in the realms. And thats when things got interesting.

See when I started DM'ing in 1980-something, I wanted it all! Every god, every fable, every mythical land, every weapon...all rolled into one. One gigantic, unfathomably large, realm where all continents connected and sometimes, didn't. Narnia? Yup, far to the northwest of Greyhawk (the Flaness). The Flaness was central, with Faerun (Forgotten Realms) to the South West, Middle Earth to the upper north, Neverland, Nockmar and the Nelwinns, even further east (from the Willow movie), Krull, DragonLance, and even the lands from the D&D Cartoon show...every animated series, every movie, every fantastical fantasy based film (Labyrinth, set in the Flaness in my world) and even the Never Ending Story, Fantasia, had it's own land to the immediate west. Such a vast mass of land that even the people of Fantasia didn't know their borders. I encompassed all fantasy-fiction worlds my little 10 year old brain could comprehend into one major continent.
This way, my players could literally travel to any campaign, any place, any world, and it was somehow, all part of one large, cohesive world, often times each country acting and surviving as if they had no knowledge of the others. But here is where the Gods came in...

In my worlds, all gods are "alive" or until killed in their own realm. Those that die still have ruins, ancient demonic Lich Lords, conniving wizards and followers, and deep, ancient, secretive cults quietly worshipping them in the bowels of the Underdark. But on top of them are new Gods, and they kept coming and coming with each new edition. Unless the Old Gods had been destroyed, just because they ceased to be worshipped on any one given land mass, did not necessitate them "dying." Not only did this allow the constant use of unexplored ancient ruins and temples to long forgotten Gods, but  it kept the doorway open to infinite creative possibilities. Here's a quick example:
As a young teenage DM, I had one player that insisted on worshipping Buddha. Granted, he was a Ninja, who was a paid assassin, who ate meat, but he was still (or so he thought at the time), a worshiping Buddhist. At least his character was. Whatever.
I also had another who wanted to be Christian. But just because he was, doesn't mean everyone else around him was. They all fit like a big puzzle into one eternal cosmology and it was FUN!

The other factor that played heavily into my realms Pantheons was imagery. When I first checked this book out of the library so many years ago, I remember loving all the imagery, the fantasy, and the ideas so much, I could never exclude one.
Before I even knew who "Lolth" was I knew her worshipers were bad news, as evidence by some of the great original AD&D artwork: 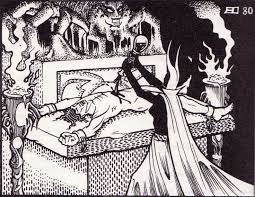 I always loved this artwork. Brutal as it is, the black cloaked priestess sacrificing someone to Lolth through some demonic acidic torture was disturbing in my younger years, and etched itself in my memory but in a dark, and imaginative way. Later images of Lolth showed her as the curvy vixen and the demonic spider as well, but all encompassing that unnatural hint of darkest evil: 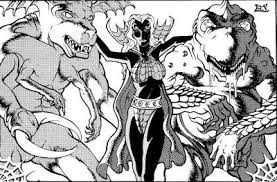 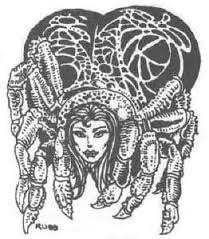 And so it is with the 5th edition now. Of course my official adventurers League Organized play half-Elf Paladin follows the 5th edition guidelines, swearing an Oath to the Ancients and choosing the Emerald Enclave as his faction (as an outsider), but in home-brew campaigns I still like to allow the floodgates of creative worship to rule, allowing players maximum creativity and personal design in their characters. I may get a bit more strict on Buddhism though.