Caverns of the Under-Table

Perhaps it's the winter. The mist. The clouds rolling in over the south-western Ochre mountains here or just that same old "calling" that comes on the wind throught the fall and winter that I have heard my whole life that I have never been able to define, but there has been a tremendous amount of creation going on in the deep dark depths of the (Ursus Templari - yes, still deciding on a proper name....long history surrounding that bit...).

Having purchased the Gale Force 9 Caverns of the Underdark adventure set, I wanted to match the terrain to not just the vinyl Underdark mat produced by GF9, but to the actual terrain models themselves. 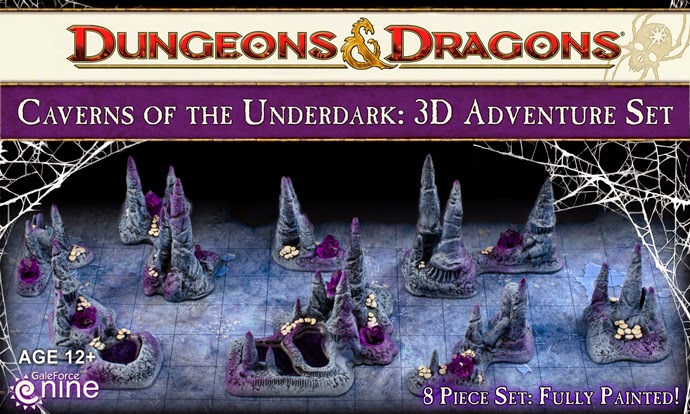 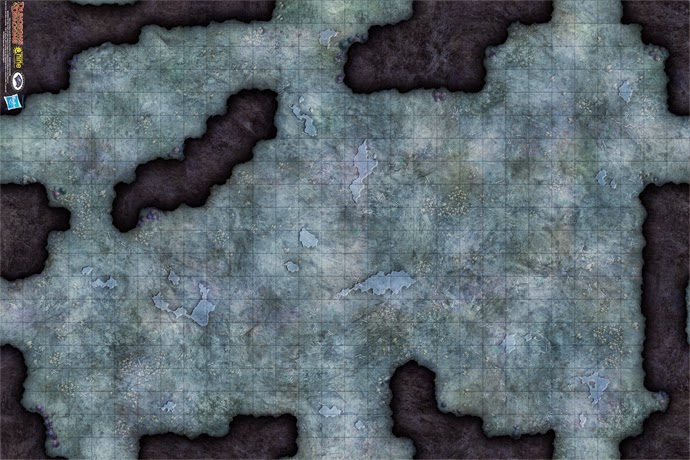 So the key was to match hand-crafted terrain pieces with the color, look, feel and outline of the GF9 ones. I'd done this before, and found that Citadel Paints "Fenris Grey" worked well with dabs of purple to capture the sense of dripping cave algae or fungi. I wanted a true seamless piece, complete with crystals, black-purple still water pools, and a real sense of similarity. 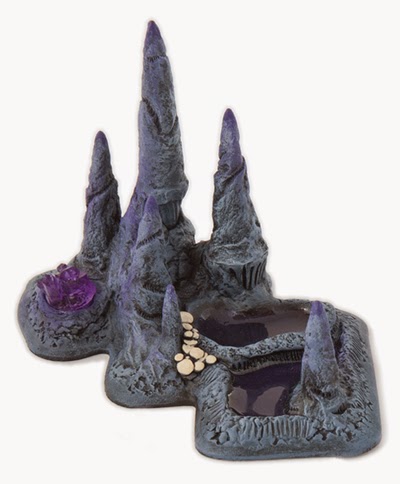 There was one other caveat too. I wanted it modular. I already had the GF9 cavern pieces I could use just about anywhere, but I needed mine to be portable, storable in the small gaming tower of the Ursus Templari, and easily accessed for potential gaming (someday). Where could I create a large scale cavern with columns, pools, walls, rolling flowstone and yet still, encompass a complete environment?
I started looking in places I already had.....midden places, and things maybe I "missed" in the past....like the underside of a table.
Yes, the UNDERside for a perfect UNDERdark....er, uh...the "Under-Table." 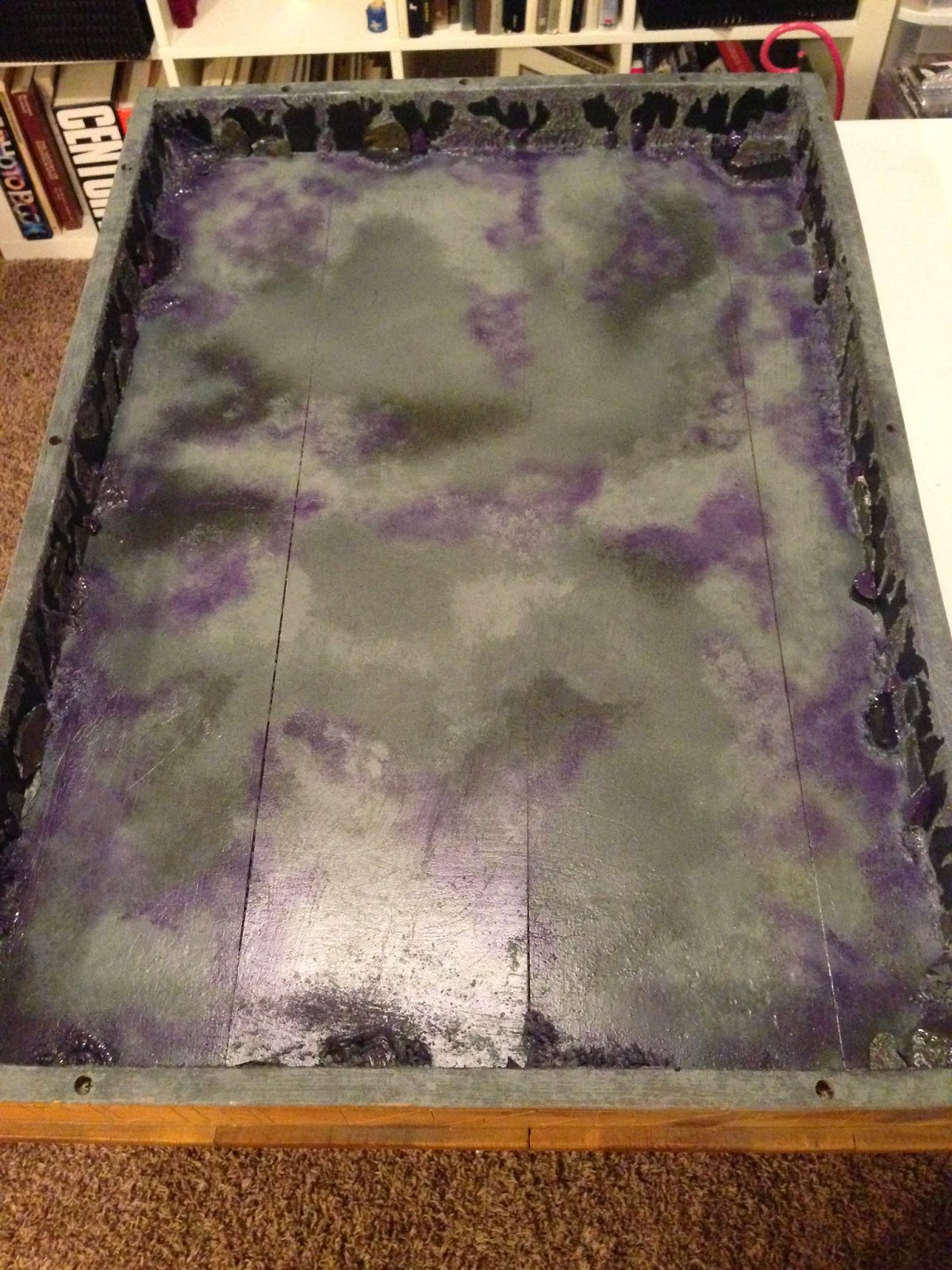 The entire table was first sprayed in a "base" coat of generic primer grey. I added dabs with a standard utility brush, allowing the bristles to spread and stretch dry-brush style to create the "blotchy" black and even deeper laid tones of brown to give some depth to the base floor. Stone or natural marble-esque look.
Following the base coat, the walls and "flowstone" was created with grey cement caulk from my local big box store. Cheap caulk, about $3, and a $4 caulk gun. Enough to do far more than what I needed.
The flowstone caulk was laid on the edges of the table inside, to create a "border" for the natural "walls" of this large cavern complex. By bringing the depth of the walls out it created natural formations allowing the caulk to sort of just ebb and flow and using a small metal pick to manipulate the texture and flow of the caulk. 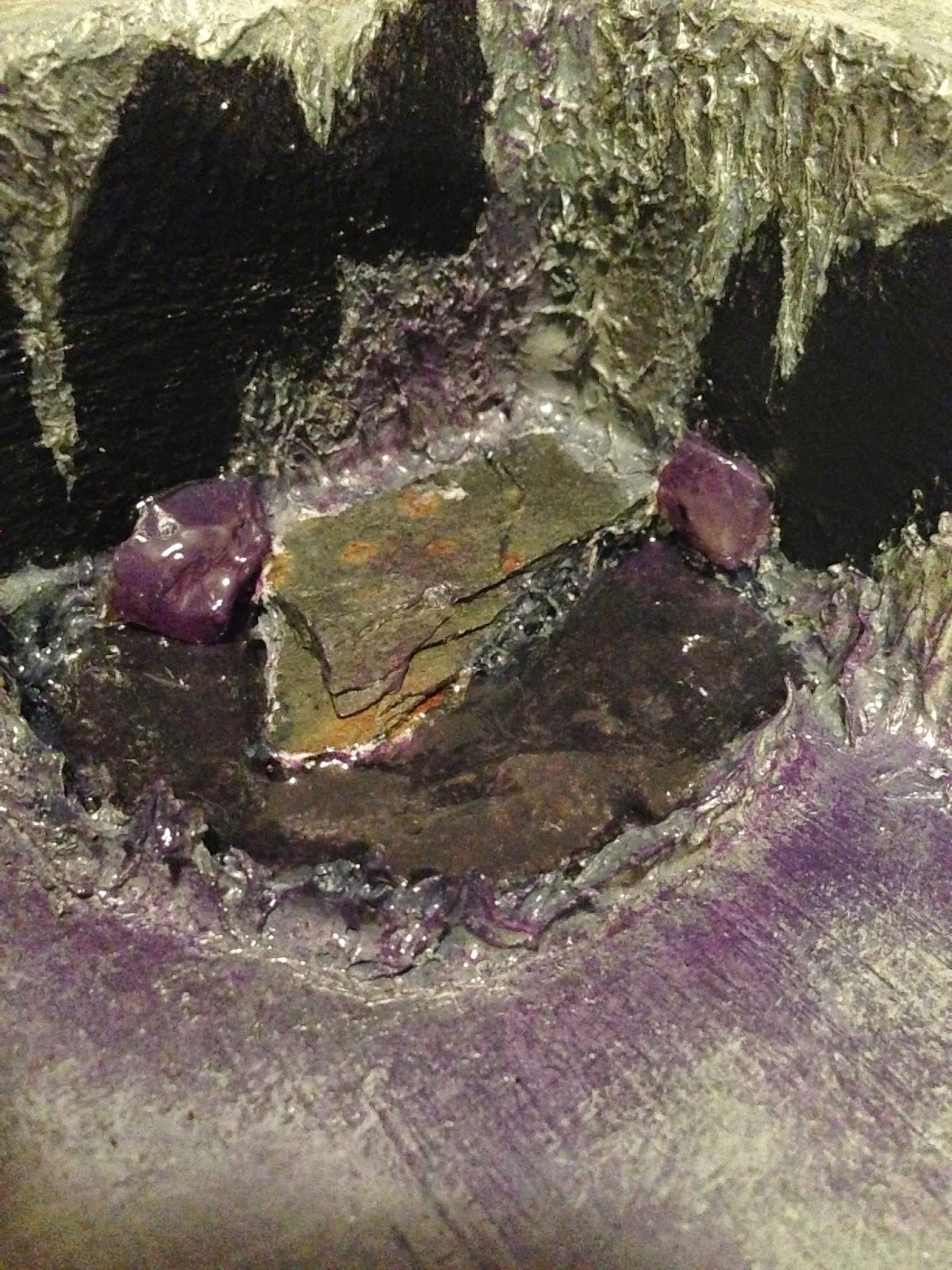 I added in small broken fragments of slate tile I had left from a previous bathroom tiling project which when put together with the natural grey cement caulk gave depth, stairs, and accents to the corners to sort of "round out" the harsh edges of the vertical walls of the tables inside bottom. These also made for perfect borders to create the small pools. 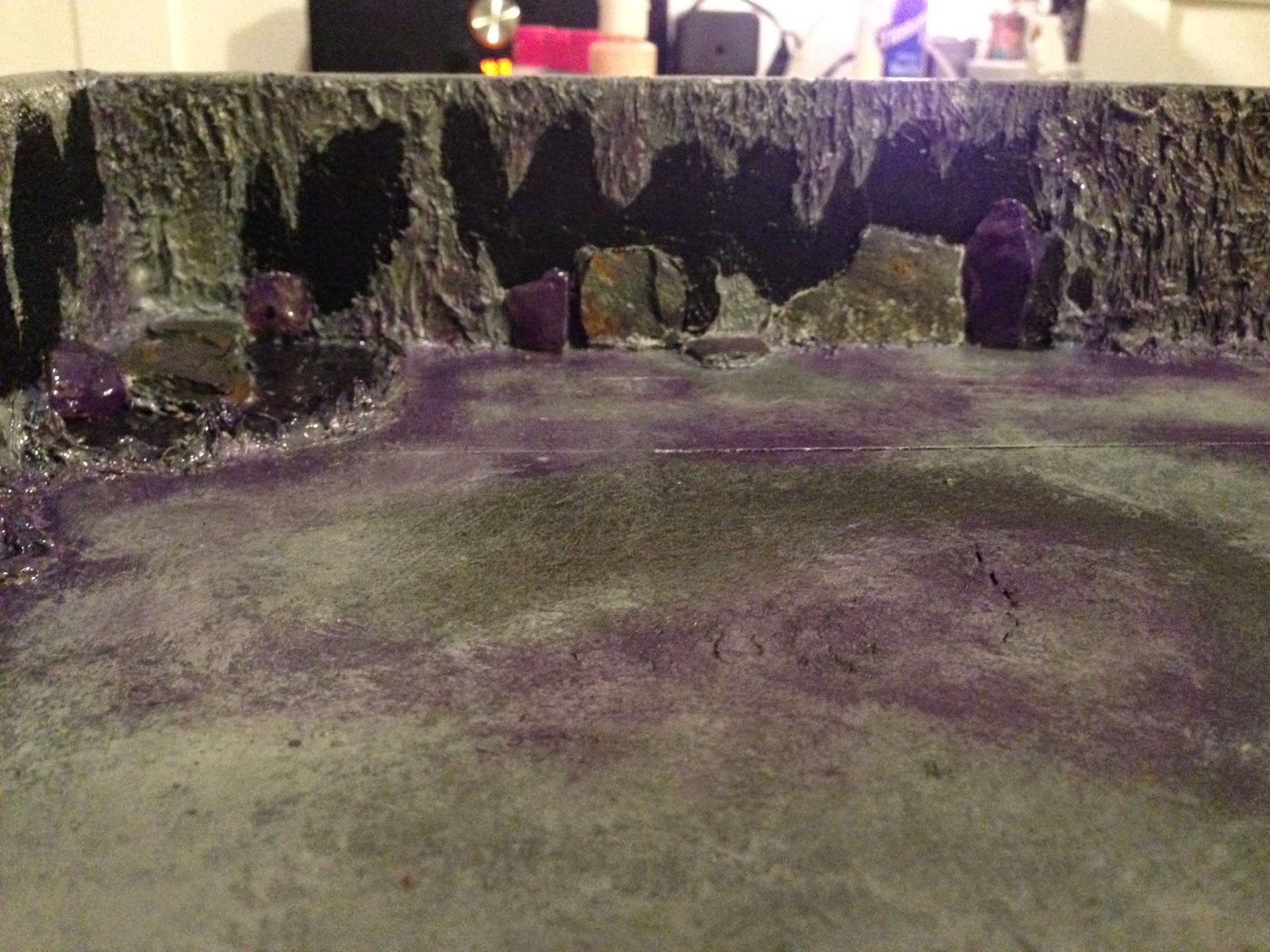 Once this was completed, came the painting of the caulk and flowstone. This was the most time-consuming portion, as the light grey needed to be first painted in several layers of grey and blue to achieve the depth to each section of flowing caulk. Once that was colored to match, the walls were dry-brushed with lighter grey again to bring out highlights, and a black water base was added to finish it off and fill in small holes and shadows.
The final step was to paint in the black "background" caverns, and shape the shadowing around each piece of flowing cave stone. But while this was painstaking and extremely time consuming, the black shadowed background really made it feel like a true "cave" system, with any number of potential monsters and enemies lurking in the dark just out of sight..... 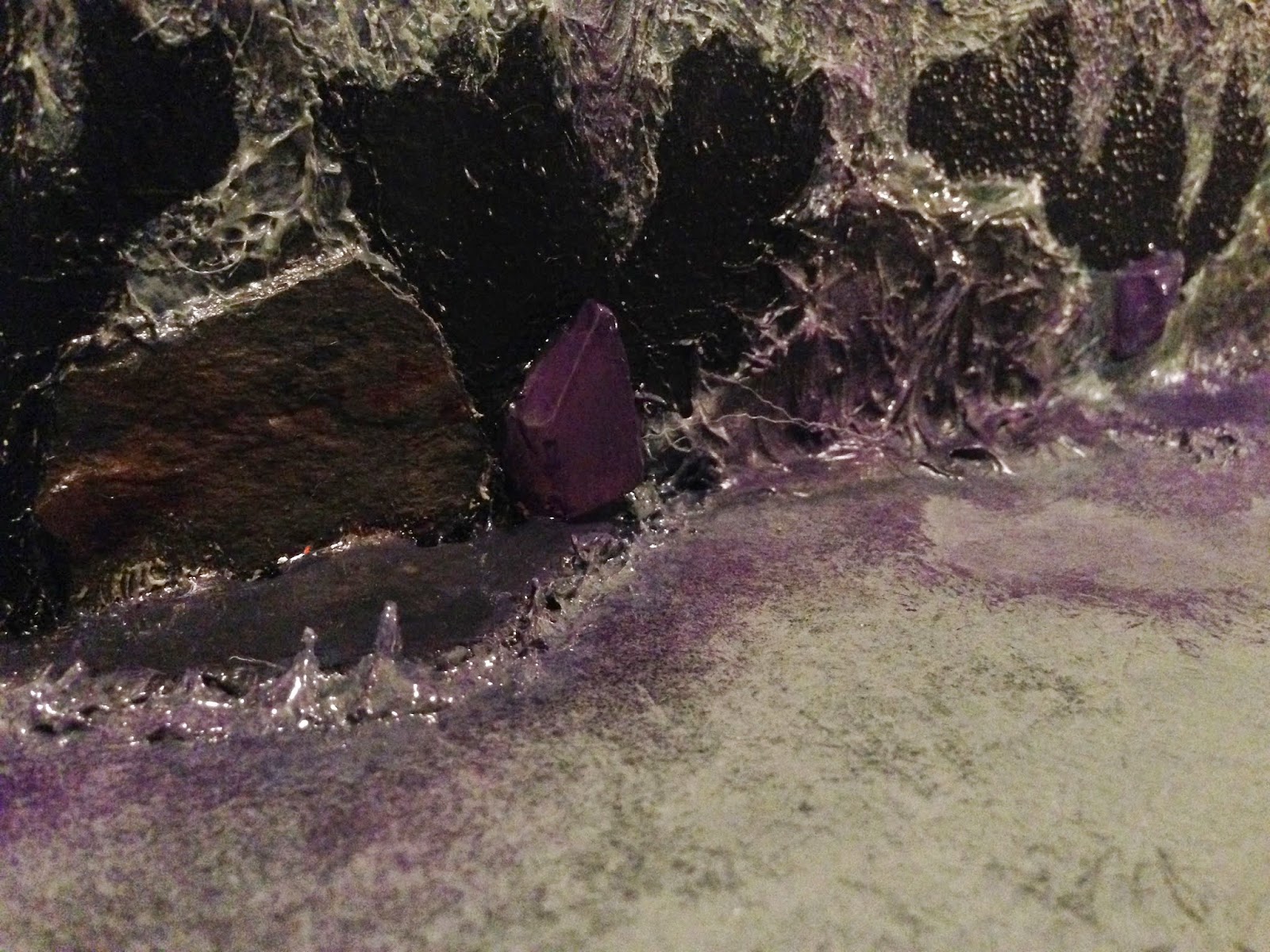 The pools were created using clear glass glue from the local hobby store, and then allowing to dry. I then painted with a watered-down purple-black hue in acrylic paint, allowed to dry, and dry brushed with a gloss varnish. this added the shiny wet look that m,watches that of the pools from Gale Force 9. I followed this same procedure with bits of broken sea glass purchased from the local dollar store that is designed to be used inside flower vases. When the clear glass was painted with the watered down purple acrylic, light was still able to show through. This allowed me to fix it to the caulk walls, and gloss varnish the painted glass for the look of giant purple crystals emerging from the natural flowstone. Again, mimicking the matching look of the Gale Force 9 Underdark crystals and keeping with the grey-purple hued theme. 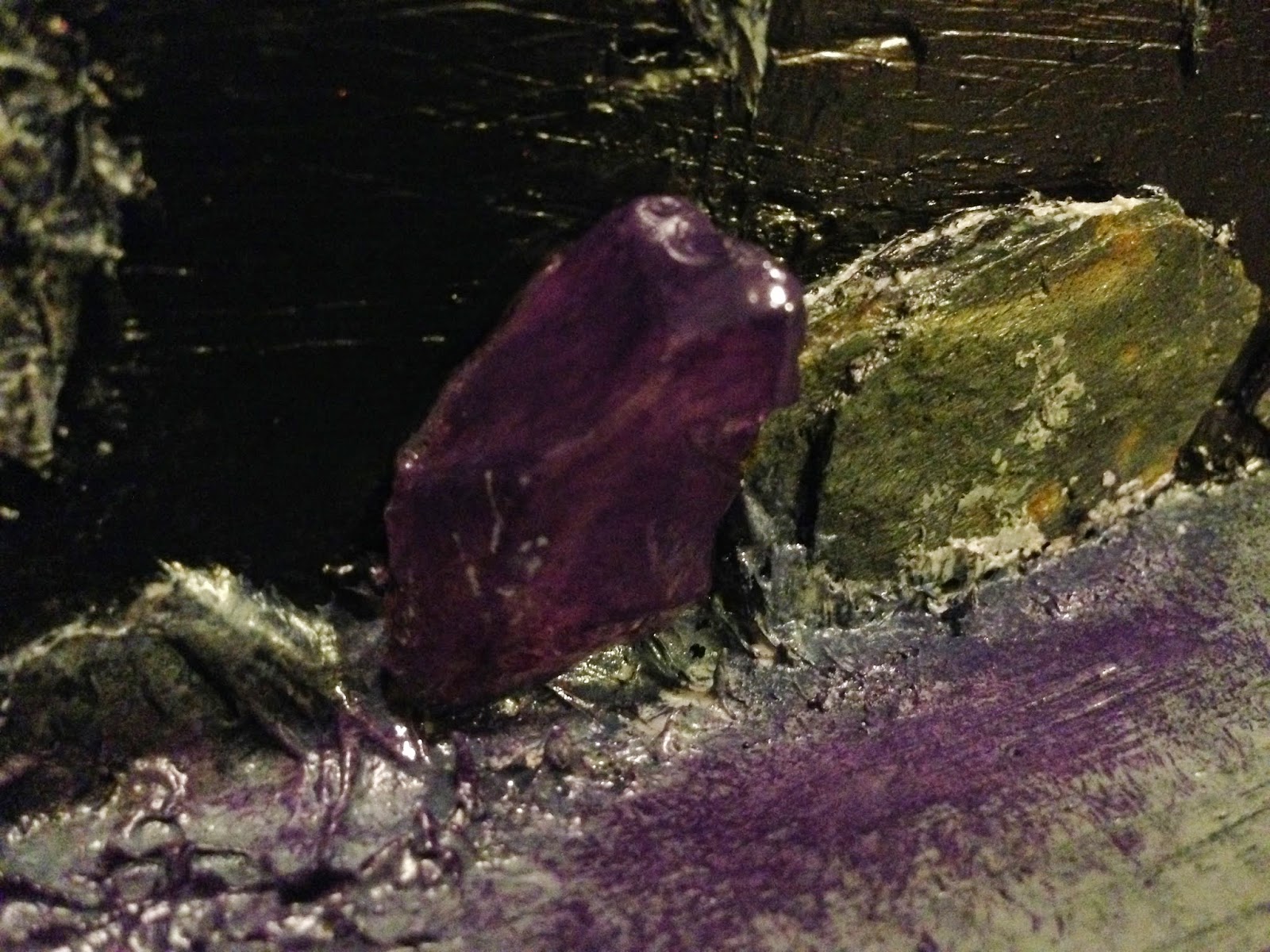 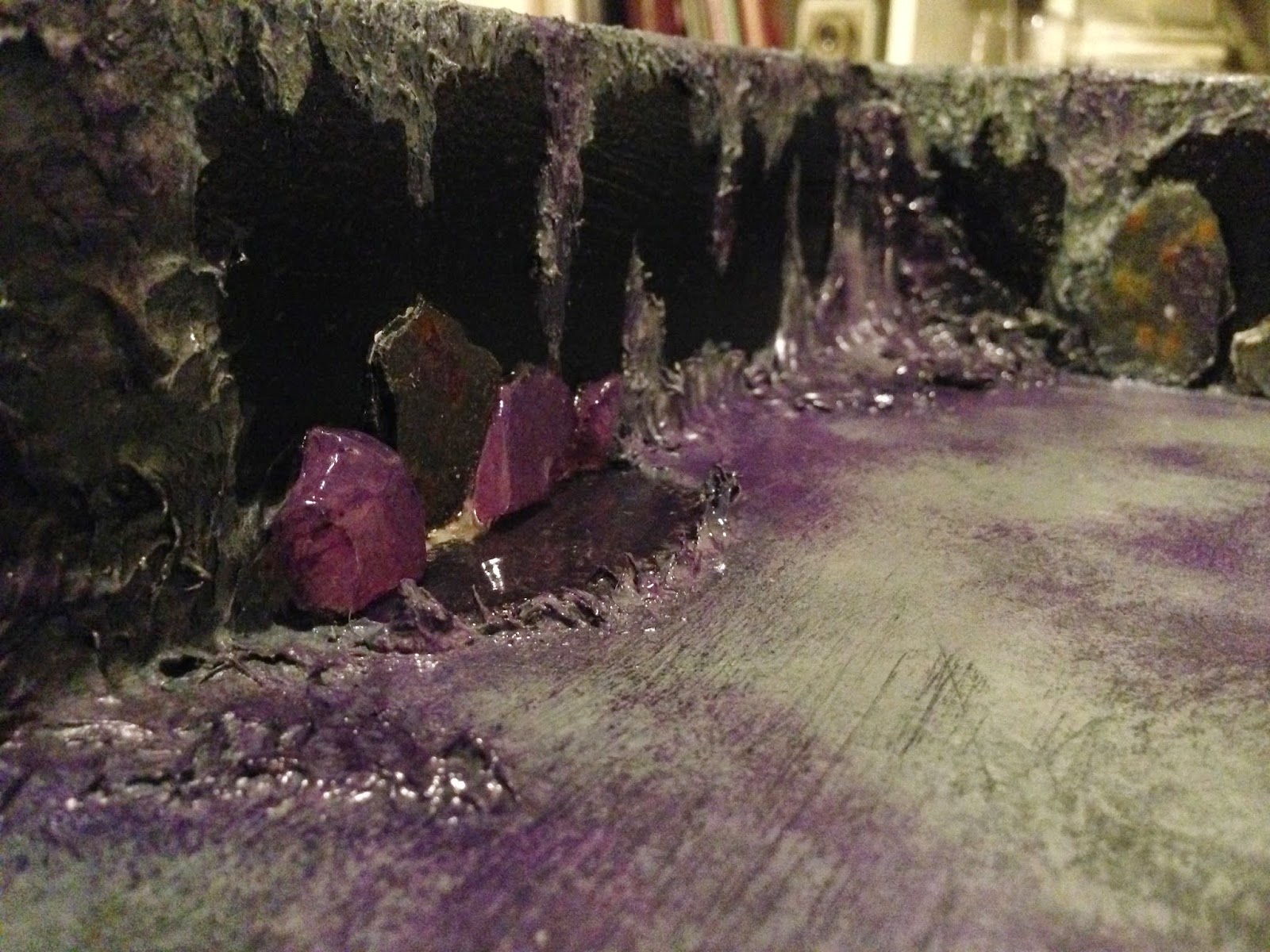 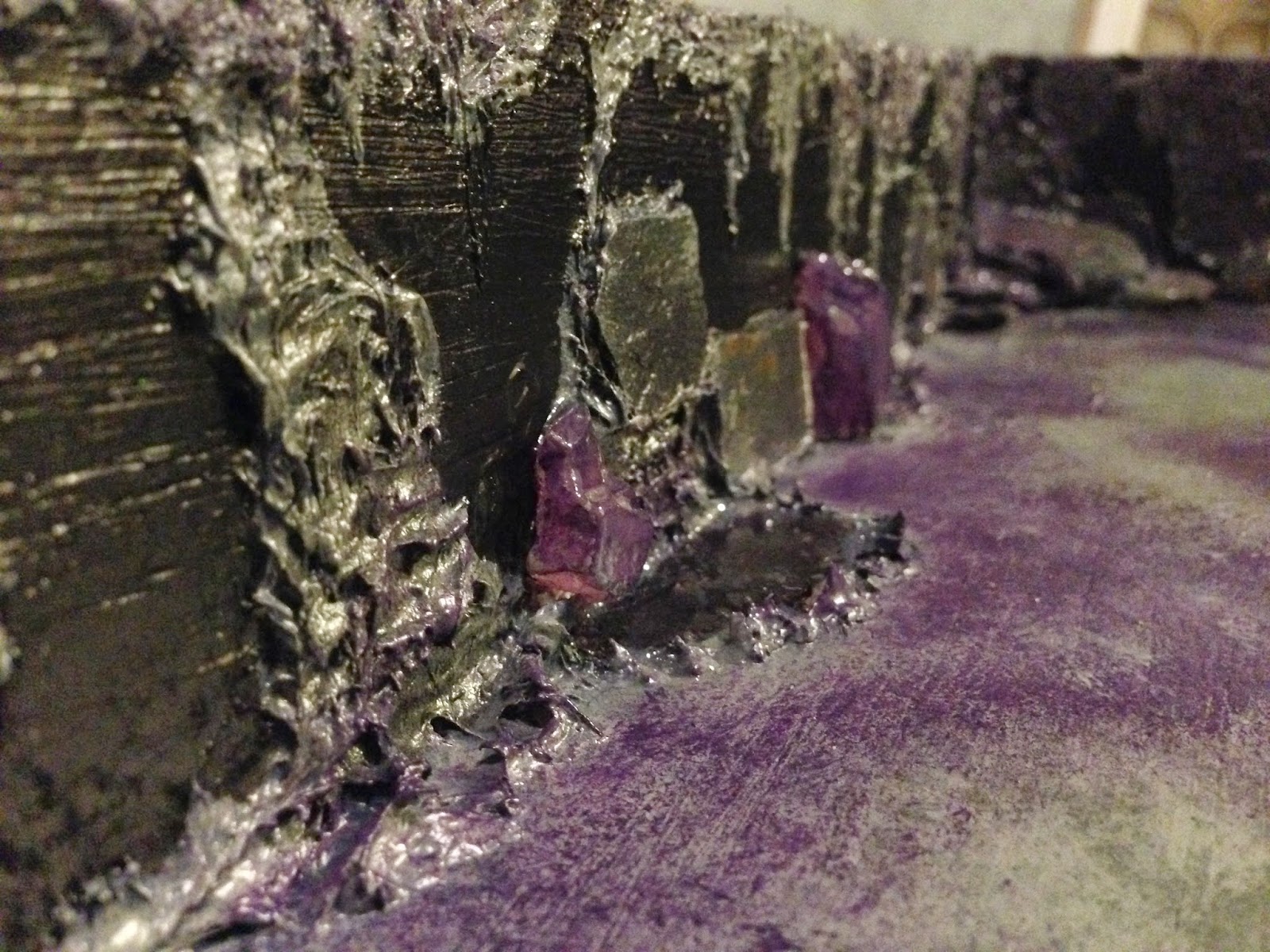 Lastly, I added gloss varnish to smalls sections of the dried and painted caulk material to give the entire cave system a wet look.
Matching with the GF9 set was pretty close, although of course not perfect. But perhaps the small imperfections add only to the variety and variances of a real natural cave system.