I read an article once, likely sometime after the release of the second Hobbit film in Peter Jackson's trilogy, that tried to direct the amount of gold actually in Smaug's horde.
It was astronomical. Ludicrous. More gold than had ever been mined in all the earth...or something like that. Far too much to re-create for any creative geek like myself.
So I needed to create a more manageable size horde for modular table top use, and to create a sizable treasure pile that matches the size of the miniatures I currently own. After all, why do I need a "Smaug-size" treasure horde when I have yet to acquire a "Smaug-size" dragon - see Wizards of the Coast Colossal Red Dragon for example ($300...wow...really?). 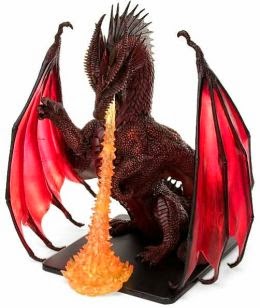 while I have a fairly good selection of these winged beasts, my largest is the Wizards of the Coast Black Dragon, and while VERY large in comparison to the other standard-size player character miniatures fromWizards and Wizkids, it fails, somewhat ridiculously so, in comparison to the size of the Colossal Red. But it is plenty large for my smaller sized gaming table, area, storage space available, and thus, treasure horde.
As for other Dragons, Tiamat seems like she would have greater aims then to amass treasure, and this treasure project model will be plenty large for the Wizards of the Coast Dragons Collectors set with large versions of Red, Black, White, Green and blue dragons.

One thing I did NOT want to do from the inception, is have a wide, low pile. I have created treasure piles before from bits of metal, glass, and old costume  jewelry, but I wanted this one to be different. More "epic" to go with some of the new projects I have created of late really focusing on intricate detail and realism. No, this horde needed to ahem height...like when Bolbo slid down the treasure pile like a mountain after the arkenstone...mass. Steepness and a size large enough to attract the attention of even the most fool-hardy of adventurers.

Early stages:
I started with a cut cardboard base with glued glass round vase beads. these glass rocks come in small bags at just about every dollar store Ive ever seen. I went with clear to ensure that the colors would not necessarily show through the mass of hot glue I would be using atop. For the "base" I wanted to avoid too much color, and save the rainbow flashes of jewels for the top if the horde.
Additionally, I stacked large brooch style costume jewelry pieces on top of those, almost making a "junk pile" of sorts and covering each section with an ever increasing mass of hot glue. I used all temperature hot glue six, allowing some areas to dry harder than others, some to drip and ooze for various effects I will detail later. I have found that high-temperature hot glue six tend to mold into themselves too quickly, and leave you with a large, albeit wide, gooey pile. Wonderful for creating slimes, oozes and jelly's, but not for structures, shapes, or mass. 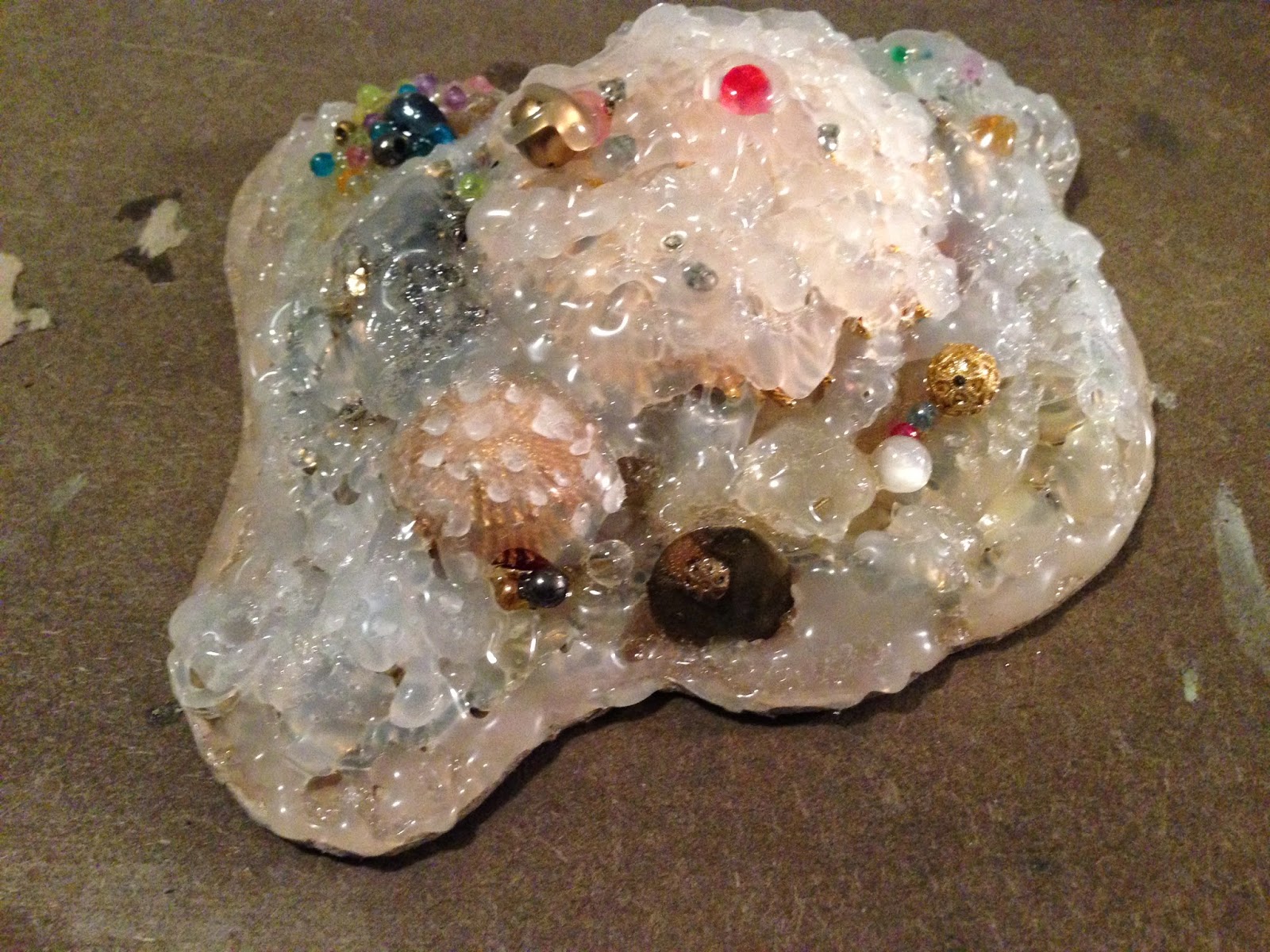 As the glue hardened and the mass began to take shape, I began to add various beads of color, shape and size. Beads work well because they do not appear as "beads" when the holes are placed at the right angle, they are colorful, cheap, and accessible. Along with this I added more visible pieces of costume jewelry cut with metal pliers into everything from scraps of gold and silver to great spheres of black and even pearls, emeralds, amethysts, ruby's and diamonds. The back of a cheap piece of costume jewelry served well as an upright shield buried in the foreground of the pile too, just about the right size for a 28mm character figure. 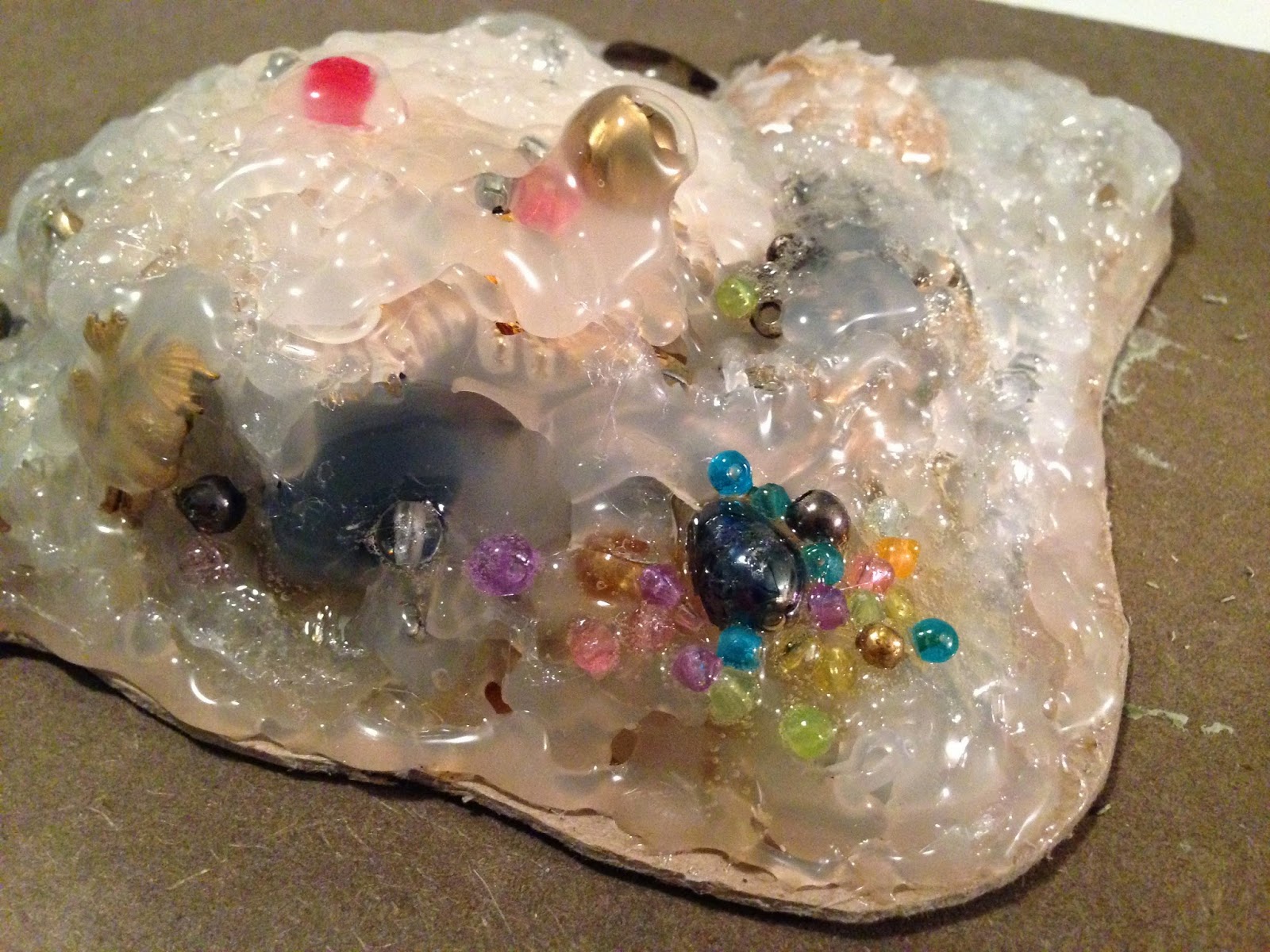 Two notes I noticed in the construction here:
1 - Too colorful of beads and it started to look fake. Some of this area here will be painted over with gold metallic and antique gold paint, to reduce the "whimsical" colors here.
2 - The glue needs to be taken right to the edge of the cardboard base so as to avoid a "base" look. I want this to look as if it is sitting on any potential surface. This small exposed lip of cardboard here in the foreground will need to be added to with additional glue and accessories to enhance the look of an overflowing pile, as opposed to a pile on a base.