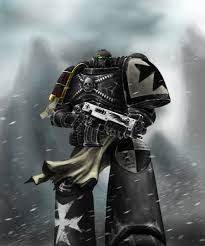 As I've written about many times before here on Creative Dungeoneering, I'm a big fan of modular Dungeon Terrain and wargaming boards.

I like the versatility, and for my small and not-often-used-enough gaming space, the storability of it.
But with my love of a bit of Warhammer 40K, and a growing Black Templar army, I am finding need to have a more adequately sized battle board for weekend skirmishes with the despicable Tau and Ork kind kind friends and family are somewhat partial to.


Herein however, lies the catch with wargaming boards:-Too large and you spend all your time in the movement phase.
-Too small and there is no tactics, movement, or strategy (or less of it) inherently required as your into close combat before the first move. Now running Black Templars, this is perfectly fine, as this is where my little zealots excel. 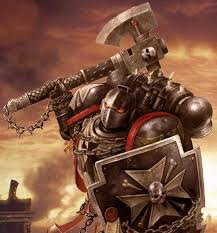 But for the enjoyment of not only the other players, but also the usability of the terrain for more than just Warhammer (primarily larger-scale Dungeons & Dragons modular dungeons or outdoor wilderness miniature terrain), I needed a board with enough space that additional modular features could be added later; buildings, ruins, mountains, forests, rivers, etc.

So this means that essentially, featureless terrain needed to be included, or terrain that would likely be eventually covered by something else. I needed flat sections.
So the trick then was creating a board that could offer some creative usability but also the interest to potentially serve as a basis for future adventures, both Sci-fi and Fantasy based. 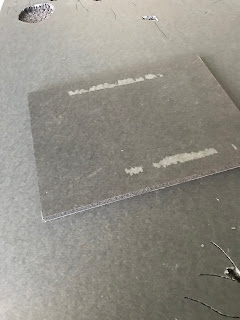 I work in a creative department and acquire a lot of extra materials made of what, in the industry we refer to as gator board. Essentially thick foam core with heavy-weight paper backing on both sides. Most of these are done for advertising examples, wall art, photos, etc. In this case the piece I am using is roughly 48" x 48" and about 1/2" thick, with a heavy-weight photo paper on one side (a juice advertisement) and a slightly-lighter weight black paper backing, sandwiching the foam core in between.

The smaller example pictured here shows the two varying sides, but any foam core board could work. The key is the thick paper on the bottom side 'supporting' or creating a 'base' for the foam core. This could easily be replicated with even better material, such as cardboard or even wood. 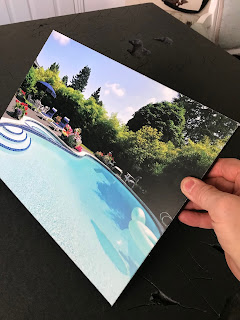 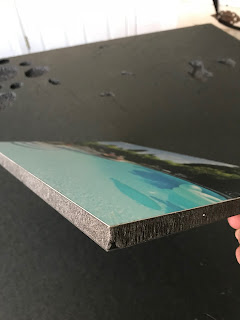 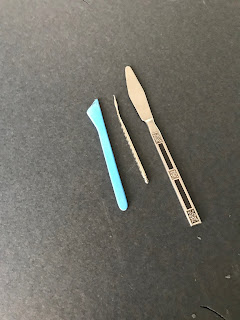 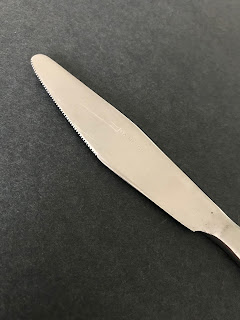 To start creating the terrain features on my larger piece, I used a set of odd tools including an old serrated butter knife (crucial that it be serrated), a Play-Doh putty sculpting tool, and even more odd and tricky to find, a vintage walnut cracking pick. This stainless steel tool is my go-to tool for everything from pushing glue to creating bubbles, and is featured in just about every terrain tutorial I do here on Creative Dungeoneering. 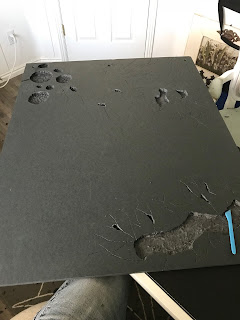 I started with simple pencil markings of a rough area where I wanted 'terrain features' like the  trench, craters, and cracks. The hardest part was resisting too much creativity. Less is more here. Remember, that open space and 'blank surface' area is going to work perfect later for adding additional modular features and using this for multiple types of terrain.

I started by scraping away the paper backing and into the foam using my trusty walnut pick, and then slowly peeling away each piece with the putty tool and knife. 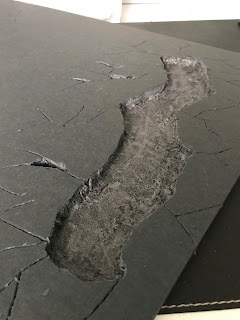 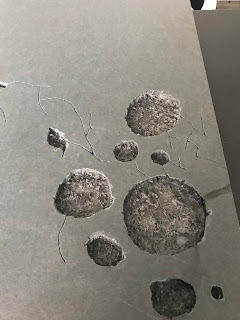 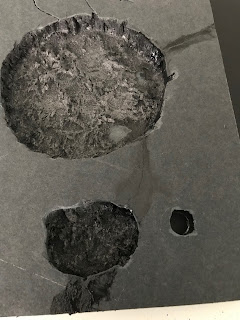 One one corner, where the crater was at its deepest, it actually compromised the structural integrity of the photo paper beneath.
This required reinforcing the foam and strengthening up this edge corner. One fo the best things I have ever found to do this is standard Shoe Goo putty, for shoe repair. 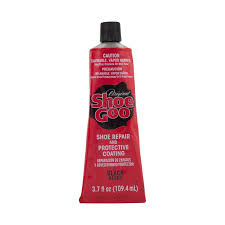 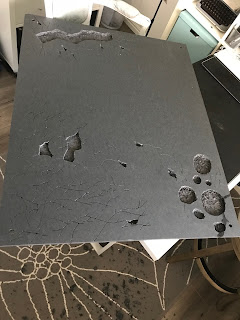 Once sealed up, the corner was adequately strong and the essential detail of the board was finished. But resisting adding more was a constant struggle!

Next was measuring with actual models to ensure that the trenches and craters were adequately sized and would work for game play. 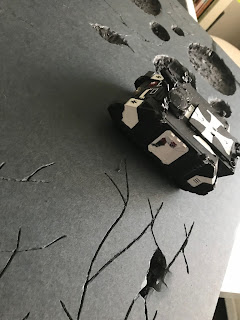 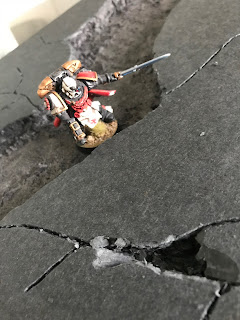 The trenches were only about base-deep, so they didn't provide "cover" in war-game terms, but enough of a drop that they do create a terrain 'feature' which gang augmented with additional modular items such as rocks, foliage, trees, etc. 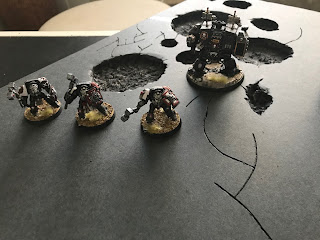 For surfacing, especially for larger flat, or open areas, little works better, and faster, than standard textured spray paint. I somehow feel like I'm cheating when I do this, and it's not cheap, about $10 a can. And this board took an entire can. But it works fast, it works well, and it really looks pretty good when all is finished.

It is also somewhat durable, textured, and easily accepts accent colors and paint finishes to add additional colors and textures, giving the surface more depth and character.
The standard stone gray available at most craft and hobby stores is so great, in that it can, like in this application here, be used for both Sci-Fi and Fantasy based terrain and cover creating anything from a cracked alien planet to a forest floor, dungeon cavern base, or even a city scape surface. 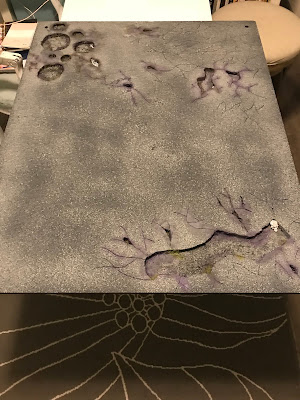 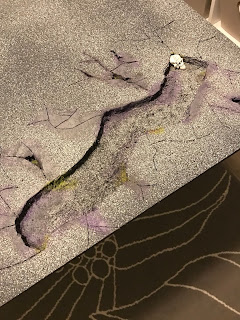 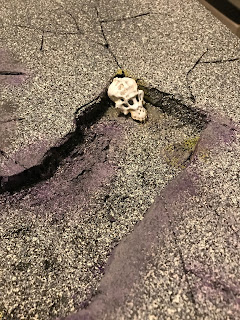 I used the Citadel Skulls pack to add some small individual terrain features that again, could work for just about any terrain or location other than snow or desert.

The small skulls gave the board character and a bit of mystery for war-game play but could just as easily be game hooks or dungeon dressings for fantasy and RPG use too. 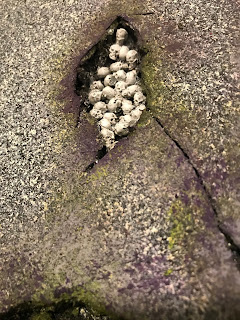 I also added hues of purple to the cracks, surfacing, and edges of the holes and trench.

This served the purpose of adding a bit of character to the board and most importantly, matching with all other modular terrain I use in this same style. Again, it's all about versatility and storability. 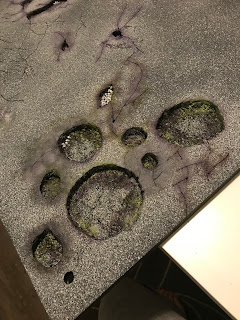 Because I intend too sue this with fantasy table-top gaming as well, I wanted my current modular terrain to match as seamlessly as possible with the battle board, making this piece even more versatile for sue in both Warhammer and Dungeons & Dragons. I am a huge fan of the Gale Force 9 Caverns of the Underdark set, and they are done primarily in a gray-blue-purple hue.

Adding complementary colors to the Battle Board here will make this a fantastic piece when coupled with those as well, either as additions to Warhammer alien terrain, or for a D&D mega-dungeon-total-party-kill-Drow-battle-royale... 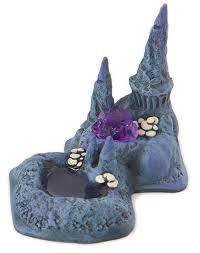 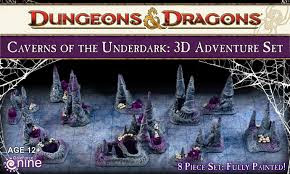