So my wife and I have a problem: We are what we refer to as 'industrious.' This definition, at least to us meaning, we work...all the time. If were not actually "at" work then we are at home....working.

So as a result, winter is the perfect time for us to work on the inside of the house since its usually so bloody cold and nasty outside, and it's the perfect time when my creative juices really get flowing too.  I've written about that before on Creative Dungeoneering. There is just something in the air in winter.

The reason this is relevant, is that my wife is re-doing her office at the moment. Like REALLY re-doing it! As in throwing out tons of stuff.
And like me, she has more creativity than time, so that means, junk for me to turn into more cool junk that I'll eventually have to decide what to do with, just like she's having to do with her junk...right now. But like most things I create and write about on this blog, they'll eventually lose their luster too.

And that brings us to the college fold-out book project. See in addition to being amazingly creative, my wife was a dang good student. And she'd create these amazing books instead of just writing a traditional papers while in college. But the nostalgia has passed, and she threw it to me to do something with. 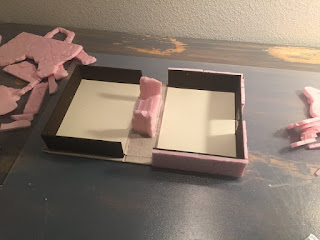 So this small thread covered box folded out and laid flat. My first thought was two rooms, entered from the center hallway. Just about perfect for 28mm. 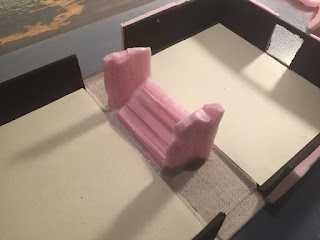 Then I realized, if I placed a set of stone steps made from pink foam in the center, cut out a small tomb door behind it, and folded one side up vertically with carved stone texture on the outside..... 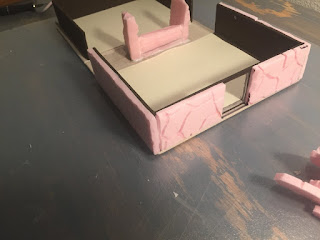 ...the stairs become a form of "ramp" and the tomb entrance, now sitting vertical above, becomes the dice hole for a small, little compact dice tower. 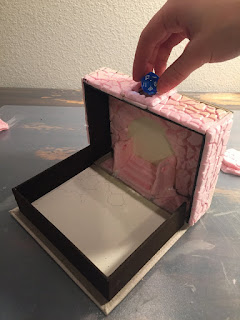 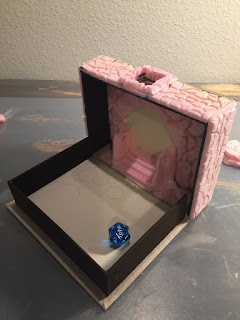 The dice roll perfectly down the top-centered tomb entrance and over the stairs into the main portion of the box.
I adhered the pink carved foam with standard white (Elmers) glue and then began to build up some stonework on the inside upper wall behind the stairs too.

The ahh crap moment...
So in every project there is a moment when things take a slightly different turn. I actually wanted this to function as both a portal and a pool when the box was laid flat. The problem was that as I added foam and glue to texture the cave walls t the back, it added weight. 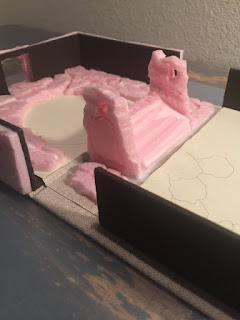 That weight prevented the box from sitting upright (as seen here) and functioning as a dice tower. So I needed to either prop up the back (which would prevent it from laying flat anyways) or adhere the stone steps to the back wall and give up on the pool.

Ultimately, the portal/cave entrance won out and the dice tower remained. Gluing the steps to the back wall also meant less surface area to cover, less interference when the box closed, and a nice strong support for the lid/back of the box.

I added more foam stonework to the back, making sure to not overlap the top of the stone steps where I had used a hot stereo cutter to sculpt and shape both the stonework and the runes (not yet visible) in the steps. This gave a nice arched feel to the stonework on the back wall. Could be used as a portal, or maybe even just a  visual representation of "more caverns" further back. 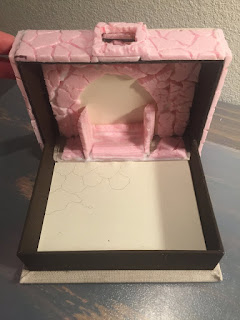 The door was a bit trickier. For the simple square opening, I created a foam frame that looked to be made from the same 'stone pattern' as the rest of the otter pieces done to hide the brown edges of the box. This allowed a bit more depth to the entrance and the creation of stalactites hanging from the entrance.

While this doesn't matter at this point since the box can't be laid flat, it will look great once the box is closed. 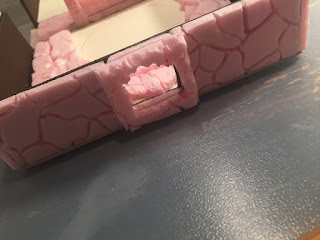 The last step for the initial phase was to attach the outdoor top.
I wanted the "top" of the box to serve as a piece of scenery too, so I attached a cut piece of basic model grass (train set style roll) and carved some small rocks which will go on top.

Since I am opting to not have the box lay flat, a bit of height on the top wont matter. And with the stone stairway attached to the back, the box sits up vertically fine now, allowing the dice tower to function properly. One thing of note here, completely unrelated to the design at all, is the lack of really high-stacked terrain on top. The reason for this is one of more practicality and pack-ability than scenery. 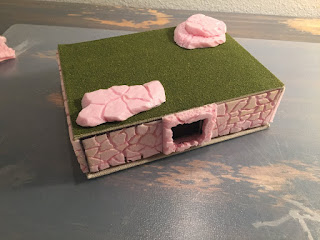 When this is loaded into my gaming bag, I didn't want a lot of stuff sticking out that would potentially just break off anyways, so I skipped ideas of 'standing stones' or ruins on top. Were this to never be intended for travel, however, that could very easily be added, making this an even more diverse piece for terrain use as well as functioning as a working dice tower and mini/dice storage.

Next came the hardest part thus far: painting the stonework. And this is the problem with all the small carved details I added too. Getting the base gray stone color into all the small nooks and crannies before I do a black shadow wash and a dry brush of lighter stone gray was tough! It required a few very tough, and very small, brushes. I was not completely confident in just spraying the whole thing primer gray or even black, as I did not want to overly deteriorate the foam. As a result, each crack and crevice in the stonework was painted in it's depth by hand. 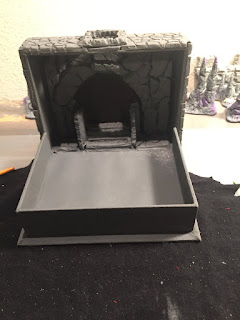 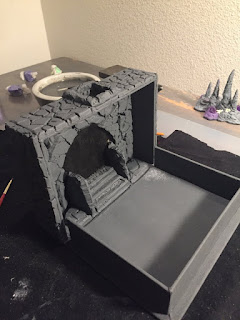 Decisions decisions, decisions.....
This is also where the fun part starts. Finishing the portal/tunnel/cave?
I had originally intended this to be a portal, the dice sort of "coming out of the portal" as they roll out from the top and down the steps. But the more I looked at the way the arch and the stone behind it sat, the more it felt like it gave the flat part of the box "depth." And there is something just terribly "old-school cool" about a classic Tomb/Cavern that says D&D to me. Something about the empty potential of gaping black holes I guess...err...maybe not..... 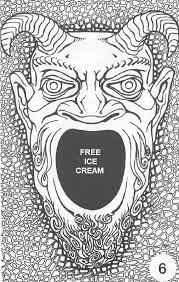 NEXT: black wash, dry brushing stonework, and the SUMMONING CIRCLE!!