I live in a beautiful little mountainous corner of the Salt Lake Valley.
While there are plenty of role-playing groups here in Utah, there are for whatever reason, not very many in my immediate area. Nor are there players with enough creativity and over-imagination, that I have thus far found, to suit my tastes for immersive playing; from miniature table top worlds to smells, sounds, and even dress.

And so it is with some reluctance but also, some youthful excitement that I venture into the world of Dungeons and Dragons Solo adventures.

I opted to create a brand new player, level 1, from the Dungeons & Dragons traditional Red box set, completely by the book. No jump starting to Expert Rules, no high-level Solo adventures, but Level 1, and right into the world of all available vintage D&D Solo adventures.

This blog will chronicle the adventures, as I play through them all one0by-one, starting with the original included solo adventure in the Dungeons & Dragons basic set, circa 1983. 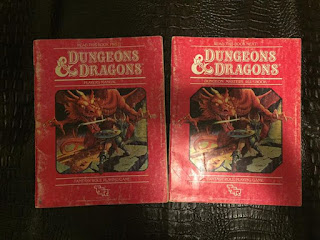 Following this first solo adventure, I will be moving on in the following order, as experience (and characters) allows: 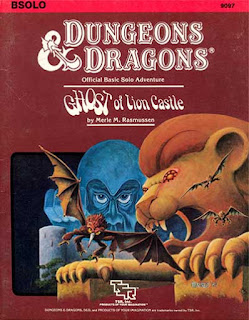 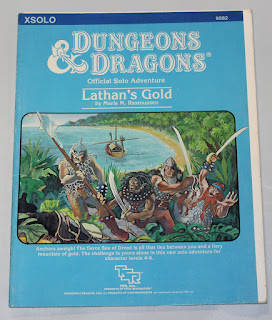 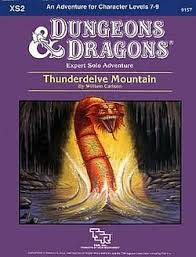 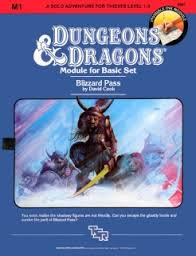 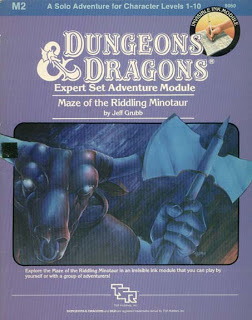 M2-Maze of the Riddling Minotaur

CM5-Mystery of the Snow Pearls 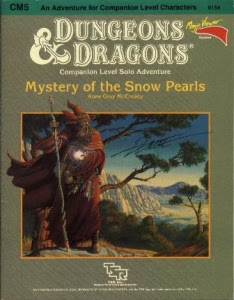 Caloren Kuri'n grew up in the small village of Hillsreach and somehow avoided falling onto the same expected path as that of his friends; joining the local territorial militia and being marched off to the slaughter some years back. The border war with the neighboring Orc horde and left all but the fewest of survivors, and a once thriving village was left little other than a deteriorating ghost town as a result.

He did however, love the wilderness. And as a great admirer of both adventure and the Elven cultures of the western regions, he sought out adventure and the potential for fortune that came with it.
He thought, probably fittingly so, to begin this somewhat questionable career path at a series of old caves not to far from his home.

Since boyhood, the local caves had been the spot of dares, challenges, fights, and fortune, rumored to lie within the depths of the now abandoned halls and unmapped catacombs of dwarves ruins. He had never really ventured in very far, maybe only 100 feet or so, but then again, no one did. Well, except for Keithard Weaslent. And none had heard of him since the day he ventured forth, 17, armed with his fathers stolen sword, and a simple sack. It had been nearly 15 years since that day, and Caloren had never forgotten watching as the town bully, on a dare by the millman's son, Chadwick Laurent, ascended the small set of stone steps and entered alone into the depths, never to be seen, or heard from again.

But this day was different. Armed with a sword received as a glorious gift from his neighbor, the widowed lady Blackguille, and armor freshly purchased from the town armourer, a family friend Caloren had known since childhood, he was more prepared than ever to find either fortune or at the very least, fame, and possibly the remains of of the long lost boy.

Caloren entered the chamber, and came some distance into the darkness, stopping to light a small lantern he held aloft. The walls were of crude carved rock, but empty braziers sat evenly spaced along the hewn cavern walls, unlit for an age.
He soon came to a large central room, with passages stretching into the darkness north, west, and east. In the center of this strange carved room, sat a large statue. The stone was faded and worn, but the image was clearly that of a once beautiful woman. Finding nothing of consequence, he began to venture eastward where a small glimmer of reflection caught his eye.
As he looked to the wall at his right, he saw there a small round metal clasp, and within the rotting leather tie, a faded roll. He slowly peeled open the deteriorating tie and found scribbled in a chalky dried script, three simple statements:

Caloren opted then to take his chances first, with the rats. He ventured cautiously down the cavern passage at his right as it twisted and turned past a section of dripping stalactites. As he moved slowly around a left hand bend, a sudden screech filled the small cavern as a great rat let from a perch above and towords his head.
The cavern filled with squeals and mad cries as rats squirmed from crevices in cracks in the walls, rallying to the cry of the lead attacker. The rats of the region were known for being quite vicious, and quite large. These were particularly nasty, and standing on all 4 resembled that of a medium sized canine rather than a typical rodent.  vicious and cruel, they were a tortured and vile breed, bred from filth far below and surviving through the scavenging and the canabalism of their own kind. It was a rare treat for the rats of the Hillsreach mountains to get fresh meat. 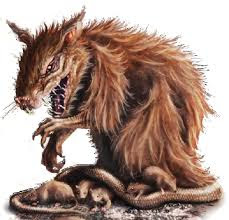 Acting quickly, Caloren stepped back, swinging hard and slicing the rat clean through as it sprung. Quickly another attached at his leg, it's claws sliding harmlessly off his metal greaves.
Swiping down and at once lancing the beast, it squirmed and fidgeted beneath his sword point as its foul blood leached out over the smooth stone pathway.

Setting the lantern down and searching cautiously, Caloren saw little else as the cavern pinched off to smaller and smaller veins, the twinkling eyes of more rats than he could count staring back from deep within their stony crevices.
As he proceeded back the way he came, he chose to venture down the easternmost hallway. Giving up on the sense of avoiding potential trouble and facing it, or at least based on what the note said, the potential of facing it, head on. 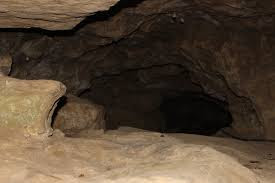 The North tunnels grew far fouler than that of the eastern passages. As he walked deeper into the dry and rocky caves stretching north, the signs of the dead and dying increased with every step. Bones littered the floors and rocks, blood, some peculiarly fresh, seemed splattered randomly.
The sheer number of bones when examined was staggering. And some seemed quite human in shape and form. For a cave that was supposedly long forgotten, it seemed to have seen plenty of death. 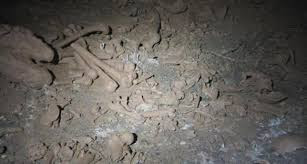 As he entered  a small alcove, at once two small figures turned from a huddled pile of freshly gnawed bones, each slowly turning towards the approaching light. 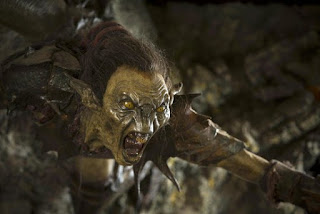 Goblins are rarely something feared by adventuring parties, but when in need, they can be a ferocious and deadly foe, and an bloodthirsty lot set on nothing other than devouring their prey, preferable alive.

As the Goblins sprang, Caloren made quick work of the first, swiftly setting aside the lantern as he parried a blow with it's cruel short sword.
Drawing backhand arcing swiftly left, he slid his blade deftly across the attackers throat, letting the black blood spurt across the small cave and leaving the goblin gurgling for life on the cavern floor as the second attached.

But the ferocity of their bloodlust was too much.
The Goblin immediately slashed, using its free hand to swipe at Caloren's exposed thigh, slashing through leather leggings and into his right leg as it tore with it's short sword in an upward thrust.
Blocked, slid, and slashed, the Goblin fell back as Caloren pushed it away with a  swipe, slitting it from check to shoulder, but leaving it only frenzied all the more.

Before he could retract, or stabilize his footing, the blade of the Goblin found its mark. The rusted edge slid crudely up under Caloren's exposed breastplate and deep into his gut, twisting and tearing through flesh and sinew in a horrendous slurch.

Blood flowed, he fell to his kneess, and at once, his world grew black as the teeth of the goblin sprang, slipping beneath his helm and deep into his open throat.

At once his world became pain and terror, as claws and snarls and teeth ripped ever faster into his still dying corpse.

The old caves of Hillsreach, claiming another soul who would no more see the light of dawn....

So my first Basic D&D character...was killed...by a goblin.
As an extremely experienced AD&D, 1st, 2nd, 3rd, 3.5, 4th, and even 5th edition player....this is a bit embarrassing.
But one fantastic trait remained: As I remember the two hour session, playing with music, an elaborate Dwarven Forge cave set up, building each piece as Caloren explored further into the caves, the memory of that story seems as real and as fresh as playing with a  group. the true sign of a good gaming session. It was a brief escape, an adventure, and a journey into soemeplace unknown.

Perhaps my elven fighter will be somewhat more equipped for the basic solo adventure next time....