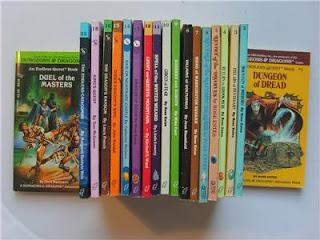 Writing and Dungeon Mastering have sways seemed to go hand in hand to me.


I write character histories. I write NPC histories.  Heck I've even written monster histories.
Within my home brewed realms known as Flannessia (all realms conglomerated into one massive world, but I'll go into that in a bit...), I've written everything from the travels of the Silver Dragon Wizard Sfarak, to the history of the Gods of both light and shadow.

They have names, histories, spellings, traditions, customs and cultures. And a few years ago, I decided it was time to actually try to put them down into fables. I started by reading a LOT more than I already was. I read and read and read. A lot.
I took courses and read writing guides. I did hours of research. I attended workshops with great writers such as Orson Scott Card, learned tips and tricks from R.A. Salvatore, Tracy Hickman, and Brandon Sanderson. I even took a class from RPG and fiction author Robert J. Defendi, where I read the first chapter of my fantasy fiction epic Shadow Born to an audience of about 100 people.
The reaction I got was amazing. People were coming up and asking me questions, telling me how much they loved it, and that they couldn't wait to read the rest.
Robert didn't like it too well. He said he thought it was "like a piece of chocolate that was just too rich." Still not sure how I should apply that. but thats ok. It isn't for everyone. It's extremely descriptive. I want it to be immersive. and not Tolkien immersive, but REALLY immersive.

See Flannessia, is a conglomeration world.
Every realm and campaign ever created by Gygax, TSR, and Wizards of the Coast is alive and well in my world.
At the same time.
Tolkien? Yup, we have him too. Middle Earth is far to the Northwest.
C.S. Lewis? Narnia is here too. West, and slightly south. It's warmer as a general rule then Middle Earth.
Oerth or the Flaness from Greyhawk is the center of my world, mostly because I just grew up loving it.
Mystra from basic D&D, up and to the northeast.
Faerun, the Forgotten realms is central. Think the United states.

The point is this. I am not trying to re-create Tolkien. He has a world. I am trying to create a mythology for all of them.
What if all of these mysterious realms were all part of the same world? What of players could seamlessly move between realms, from Middle Earth to Hogwarts and back to Narnia via the Sword Coast?
Why not?