BACK TO THE DUNGEON!

Some scale photos of recent projects utilizing the Caverns of the Undertable project...
(creativedungeoneering.blogspot.com/2015/01/caverns-of-under-table.html ) 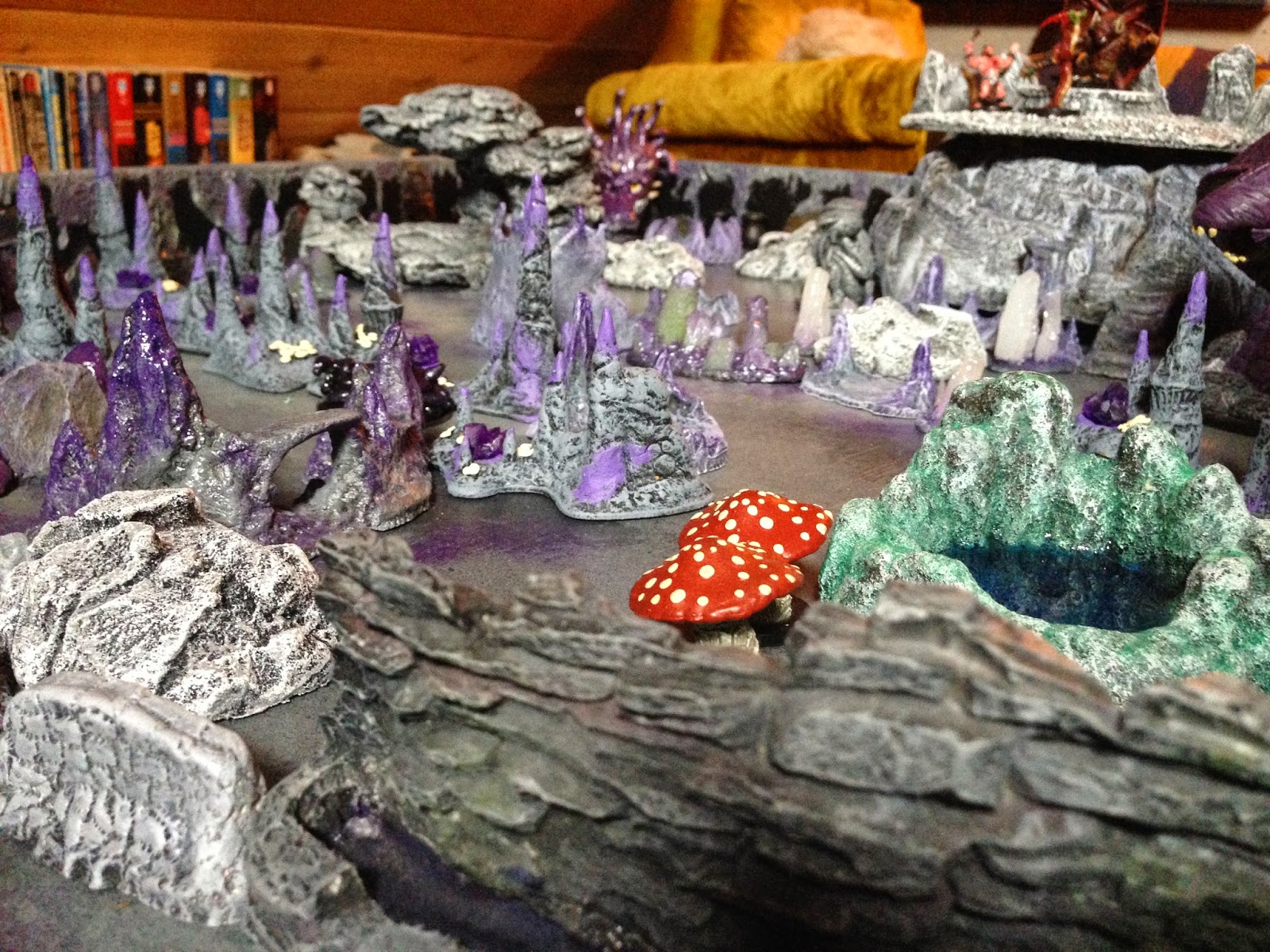 An overview of the general layout of the dungeon. Placing encounter miniatures within the gaming areas, while the most imaginative and enjoyable part, can prove to be a bit underwhelming if revealed too soon. Thus, much of the dungeon, while visible to players on a massive, wargame-like-scale remains empty at first view. 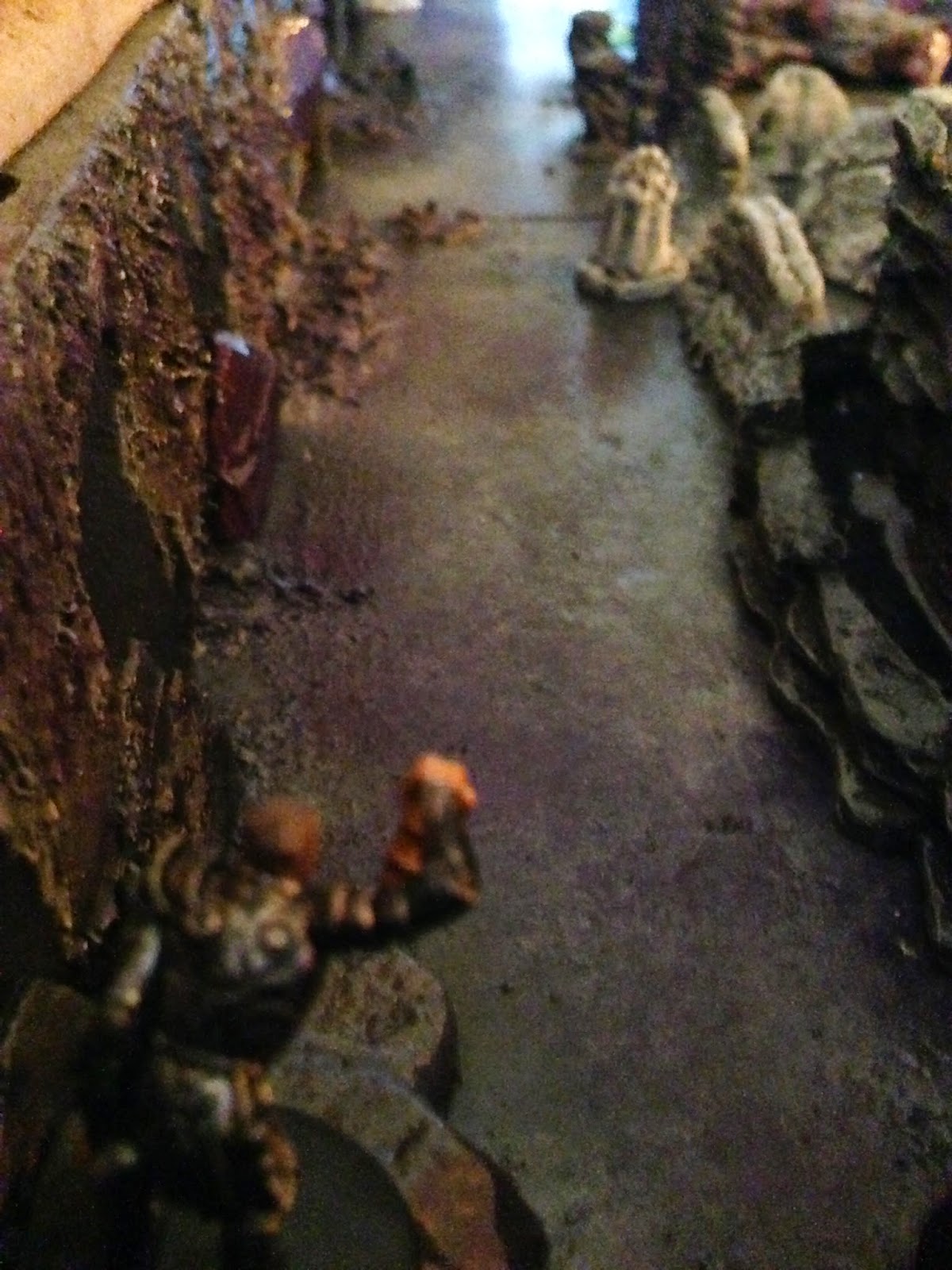 A player character's figure makes his way down the stone steps beneath Cahz-Caligh' into the long dungeon hallway. Visible past the rock walls and jeweled rock formations lie the ruins of an ancient temple.
I always try to keep pathways wide enough to give the sense of "expanse" or size, breathability or "realism." while some passages are perfectly designed to be narrow, single-line advances in movement, I wanted this section to provide room for combat at almost any point.
When creating the under table environment, I used a varied surface color allowing for various plot lines. this could be both a rocky stone floor, or a mirky watery tunnel, and colors could serve well for either purpose. 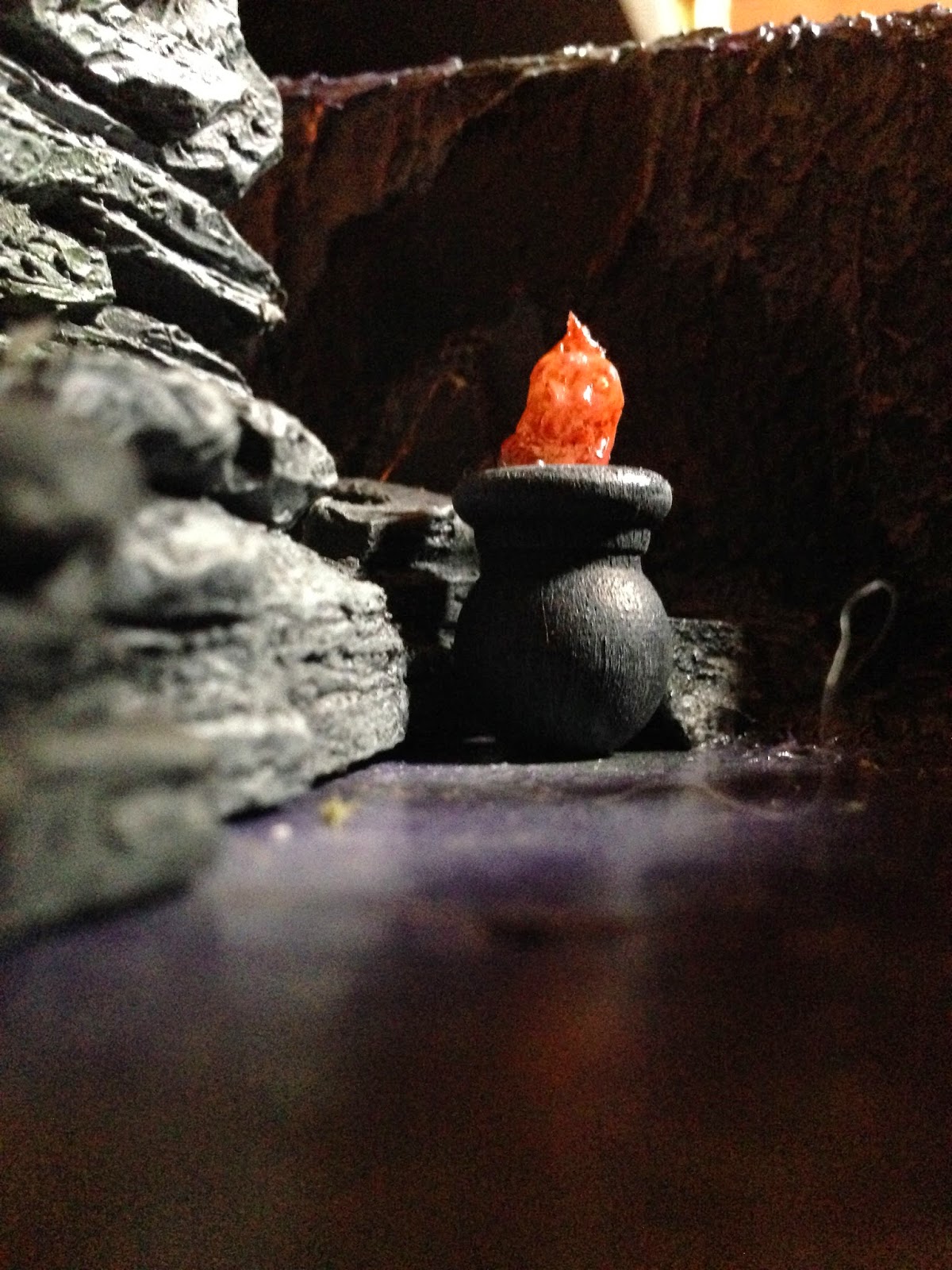 A brazier with flames - made from a wooden door pull and a bit of dried hot glue. I painted the barrel shape with a charcoal black and dry-brushed with a licorice for a more worn, "old-iron" type look. I then painted the epoxy in varying levels of intensity with both yellow, red, and highlights dry brushed in orange. I have found that when painting epoxy resin's such as this, starting with a thin base coat of yellow allows the clear surface of the resin to almost highlight through, giving the flame a sense of life and movement. 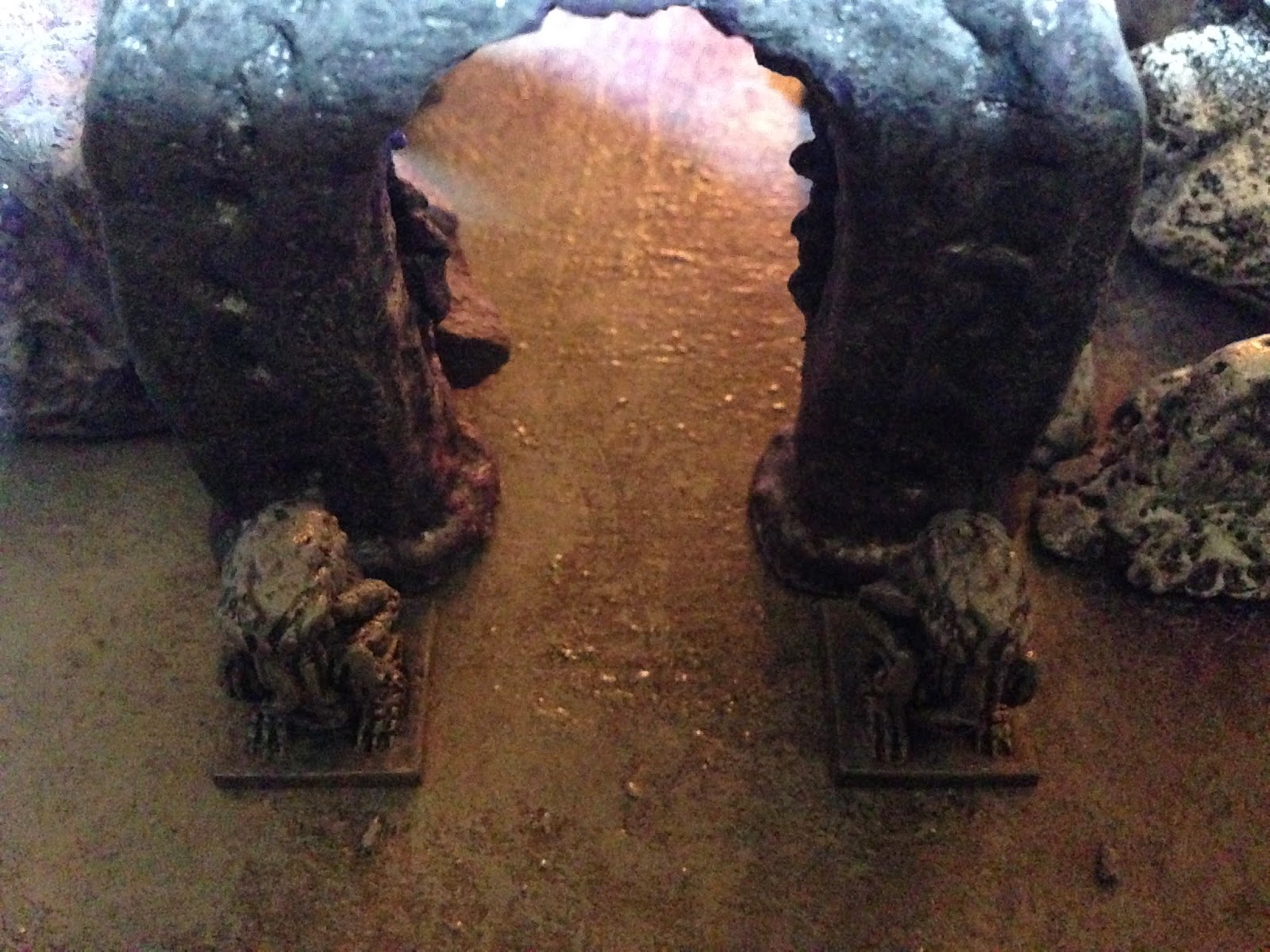 Sentinel statues (or potential traps?) stand watch over a dilapidated stone archway, detailed with ancient runes inset. Each sentinel is a simple plastic "Cuthulu" miniature, painted in a stone grey and washed with a black before being dry brushed in a slightly lighter grey shade. The Combination of the three paint layers provides the look of old stone, mottled and dirty. The archway was sculpted from DAS clay available for an affordable price at local hobby supply shops, and then painted in various layers of stone shades. The runes were sculpted into the clay giving only a very slight hint at their presence. This allows the DM to either decide to use these or not, depending on storyline. Multiple options, multiple story hooks, and multiple game uses, all each potentially different and unique. 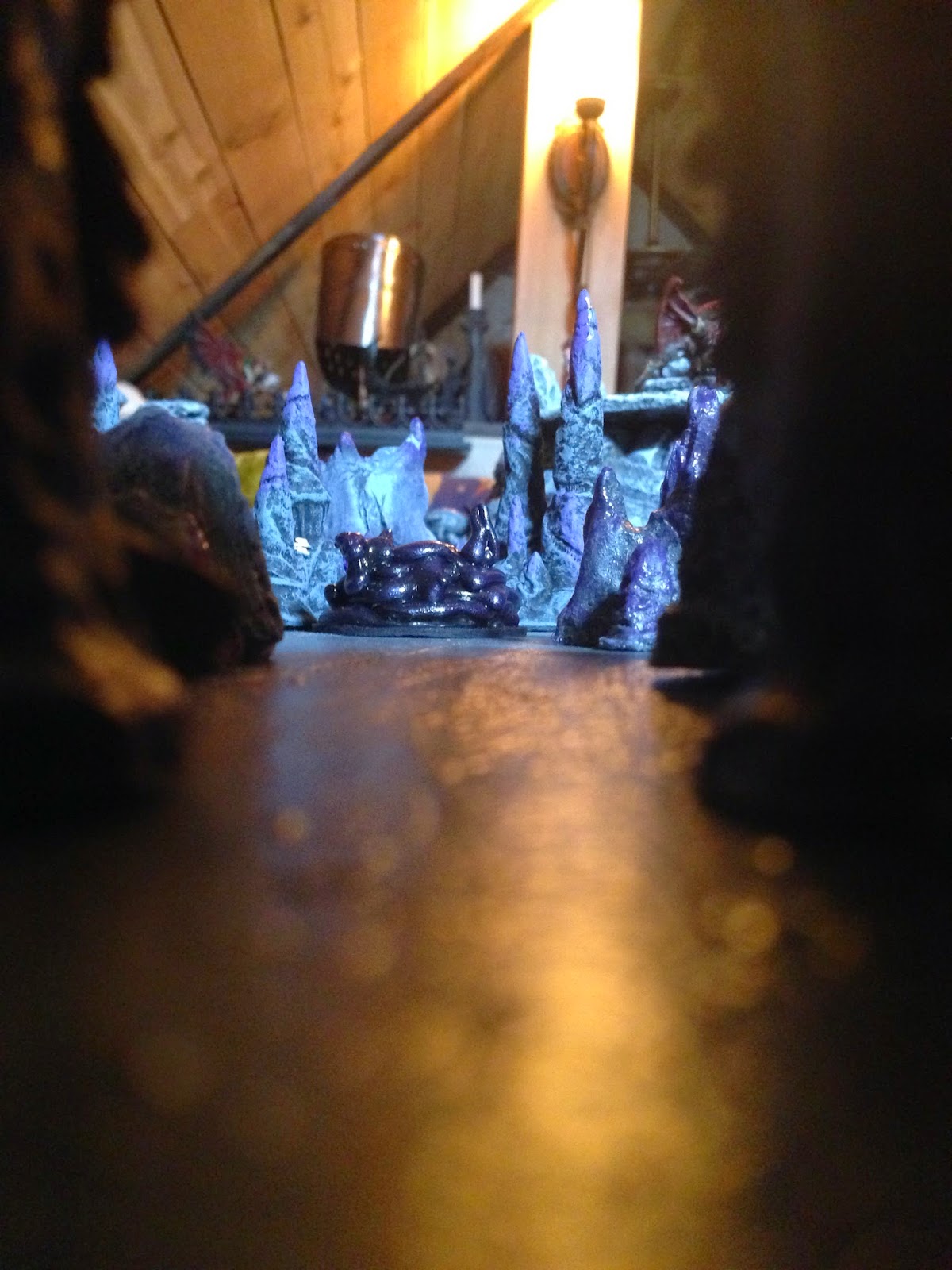 From within the arch lurks in the distance, the larger main cavern, and a lurking black pudding, perched against a craggy stone corridor corner. 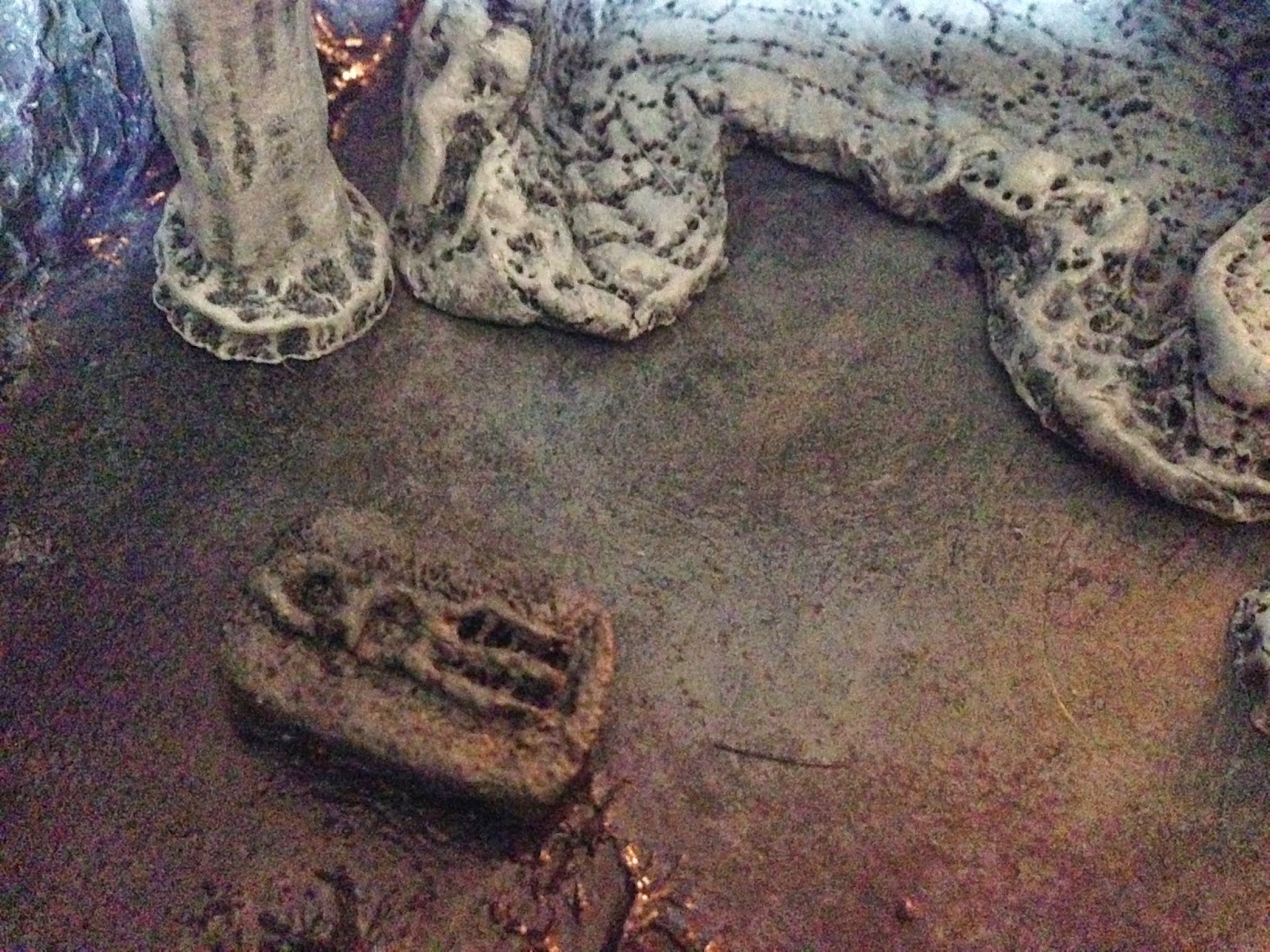 The old temple ruins at the far end of the main hall reveal a damaged sarcophagus and ancient pillars. Again, the cavern floors color variation serves well to give the hint of old stone, while allowing mystical color waves of purple-hues to come through, witch for my dungeon cavern set, matches the Gale Force 9 Underdark set well. 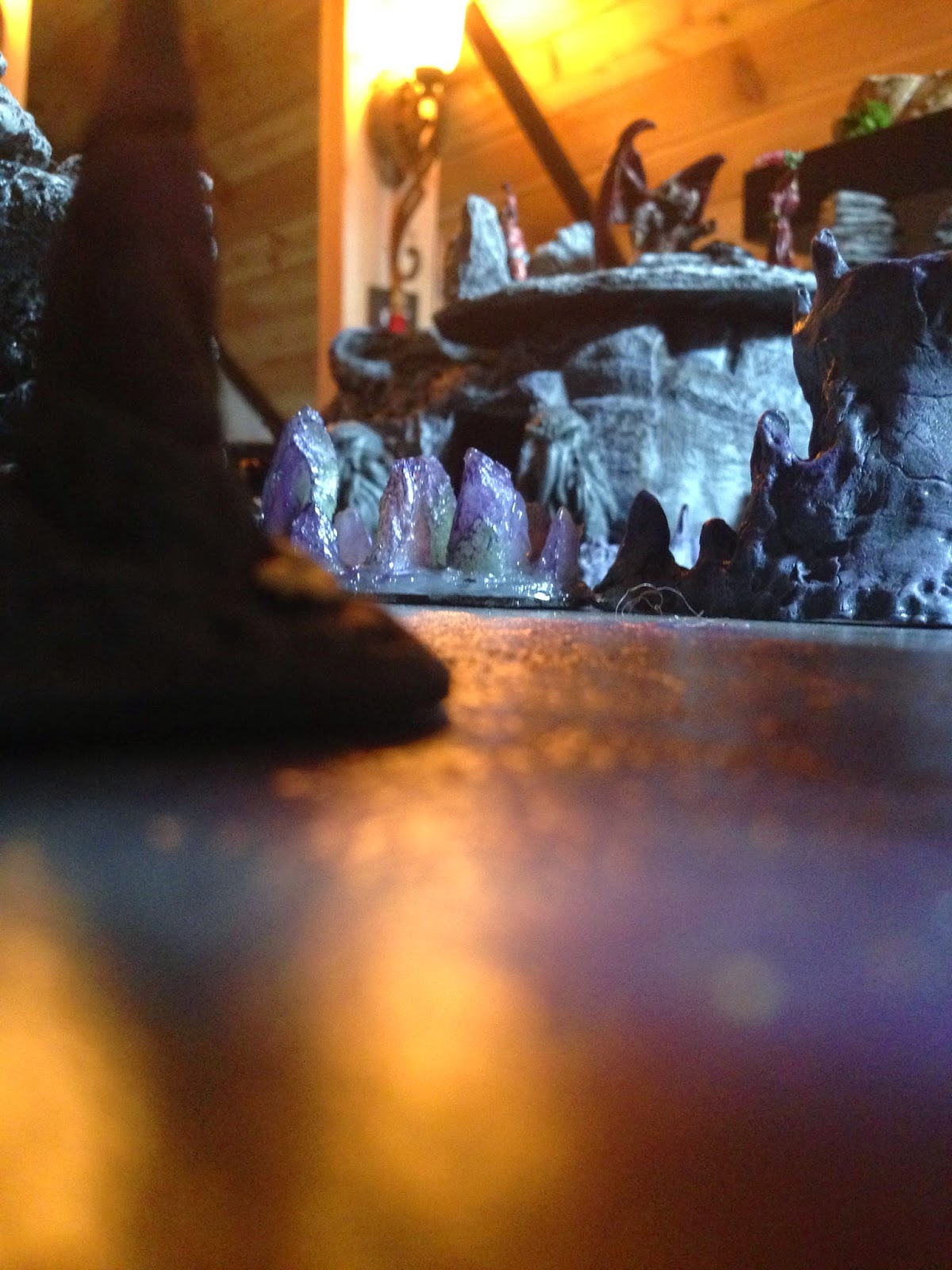 In the distance of the cavern lies a large mound (War Torn Worlds, from their fantastic Places of Mystery line), past the crystalline stalagmites  (made from epoxy and painted in silver and amethyst metallic hues, sealed with a  clear gloss) and through a glistening stone floored chamber. This reflects the slightly "shiny" floor of the Undertable under dark cavern model, allowing the surface to replicate water or smooth stone with varying colors. 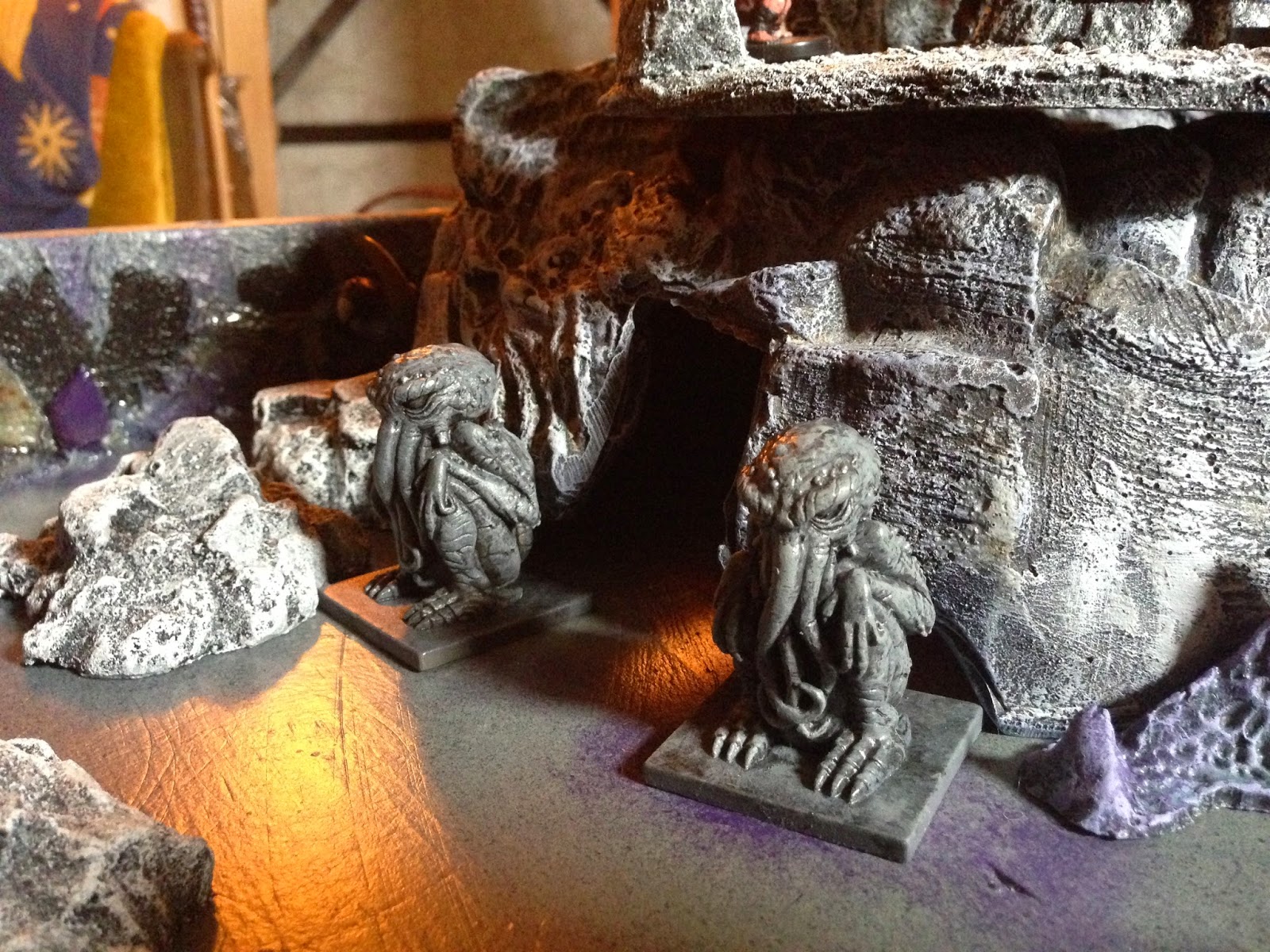 Sentinels, in a larger scale, matching those of the early passage way made from Cuthulu miniatures. These are larger scale models, but serve as great statues for modeling, and in an Underdark setting, are eerily similar to the D&D Mind Flayers. these were similarly painted in a rough stone grey color, then washed with a light black wash and dry brushed with a lighter grey to create a stone look similar to that of the terrain used throughout. This "modular" effect initiated from the beginning of every project allows infinite combinations of all terrain of multiple varying size and form, and yet they can all be put together in one giant set as well, depending on game and module size. The stone mounds are from War Torn Worlds, and the base cavern is actually a re-purposed reptile tank accessory, dry brushed in grey and purple hues, again, to match the other pieces of terrain. 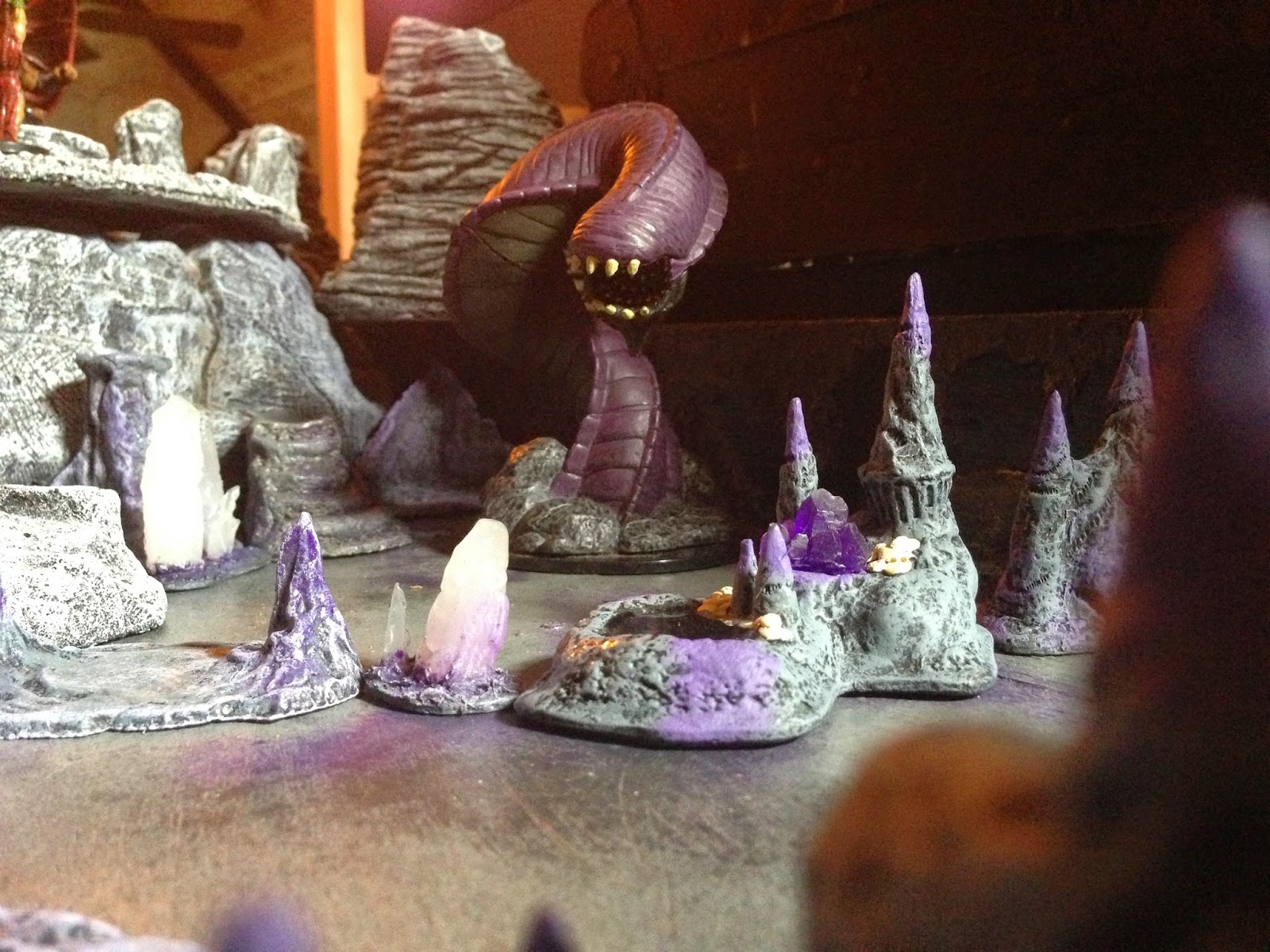 Lurking around the corner crevice beyond the Gale Force 9 stalagmites set is a waiting Purple Worm. This si from the wizards of the Coast line. In the foreground is a series of crystalline stalagmites made from simple chunks of dried hot glue and a basic cardboard base, painted to match the GF9 counterparts. The large mounds beyond are from the recycled rubber line by War Torn Worlds. 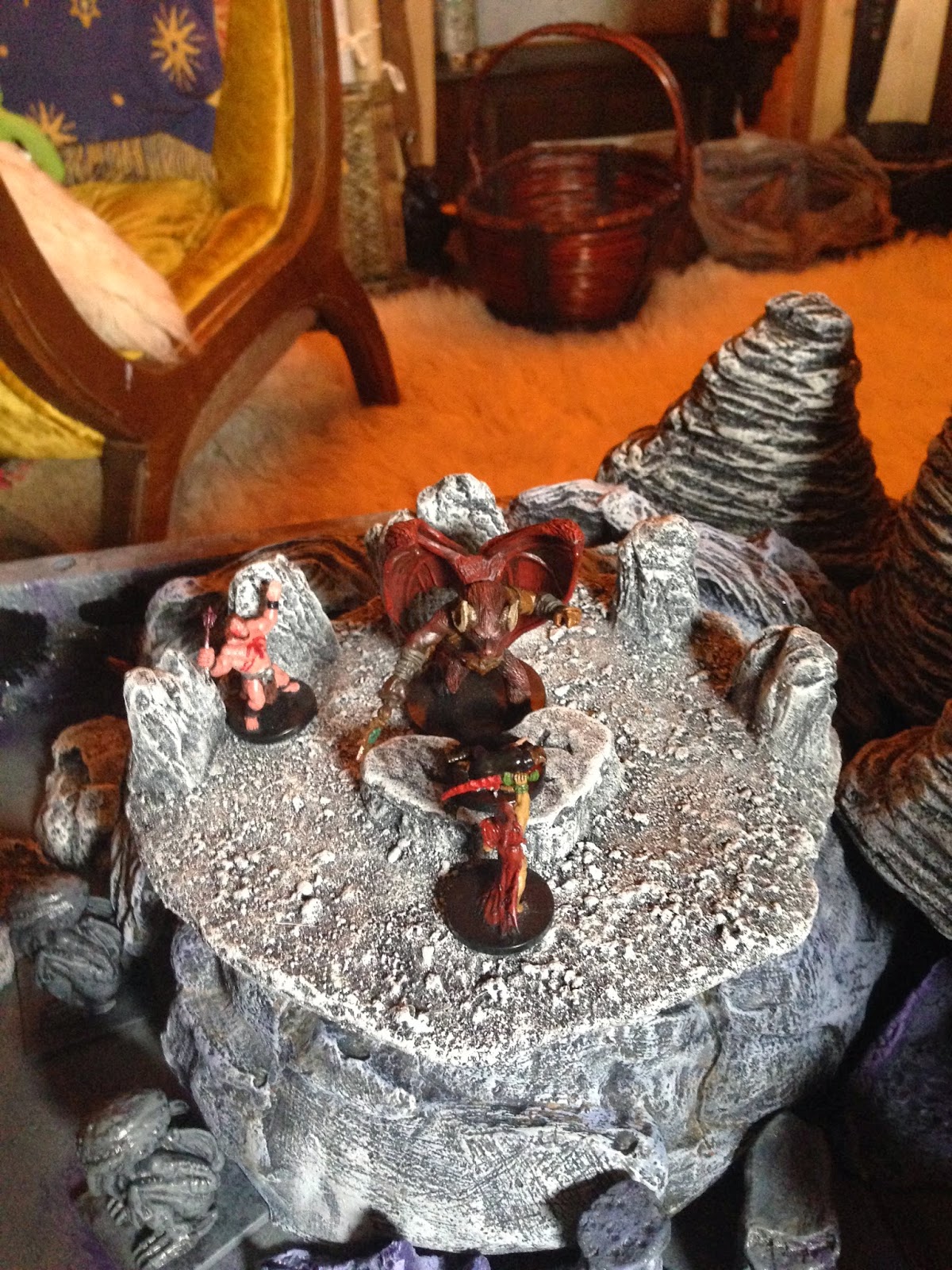 The top of the War Torn worlds Places of Mystery Altar serves well as the pinnacle of the adventure, where the Orcus cultists are bringing to life the Aspect of Orcus with the required human sacrifice. All minis by WOTC.
While the dungeon is fun to build, and even more fun to run adventures through, The sides of the dungeon need work. When players look "down" onto the game table I want the sides to reflect the environment they are in. Side walls will be an upcoming project to hide the room this is set up in.
Lighting is also something I am still working on. Dwarves Forge of course does an amazing job with their ads for their Kickstarter Terrain with music and lighting. Some of which I hope to emulate in future projects...