A Busy project weekend....
Here is what this started out as in the previous Dragon's Head Post: 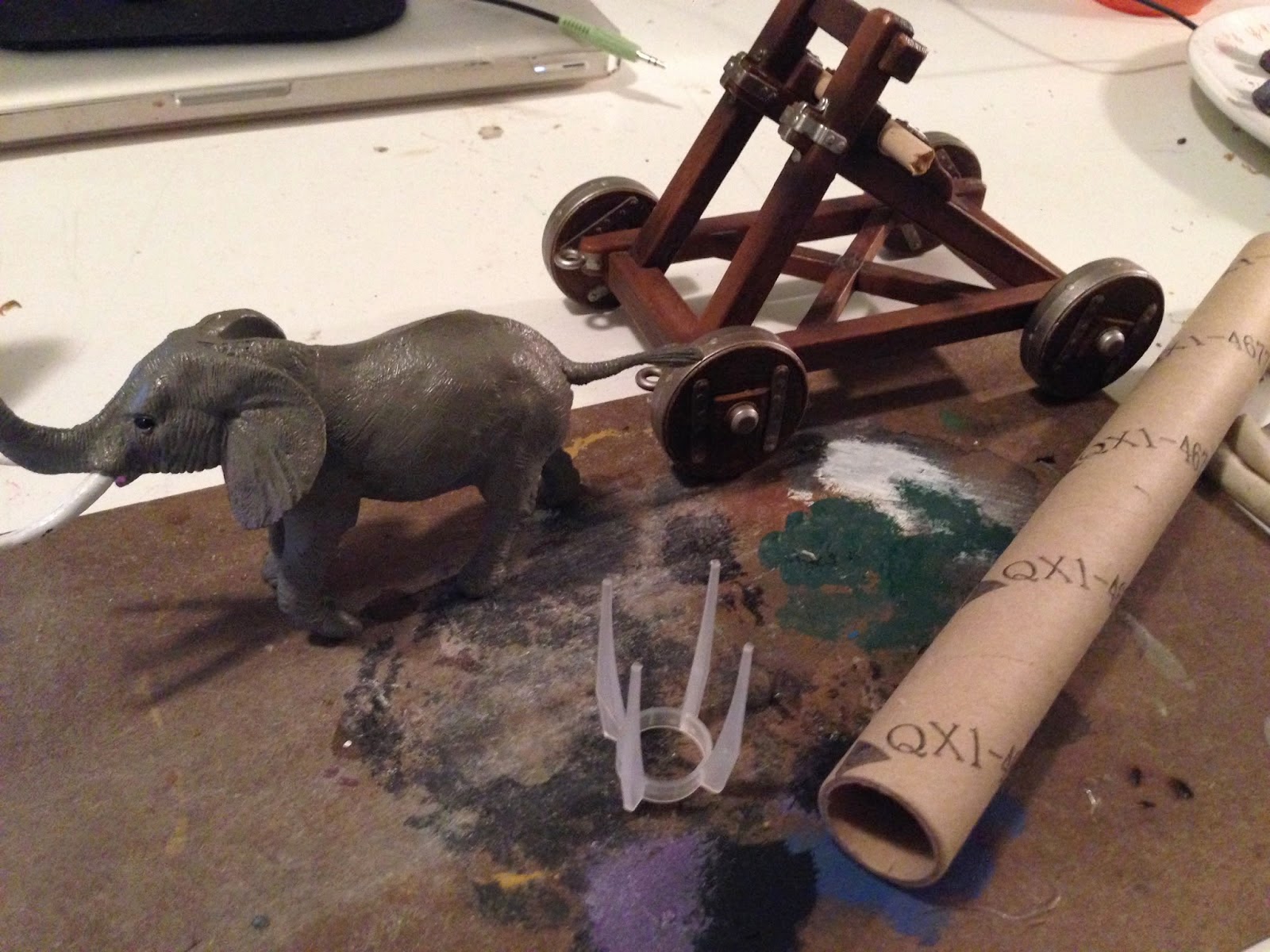 -A thrift store toy elephant - $.50 (unused for this project...I have a hard time creating fiends out of such beloved animals...)

-Additional elements included paint, glue, and an old thrift store plastic dragon ($.50). Everything else was from recycled or re-purposed bits of scrap, wood, metal, chain, and paper. 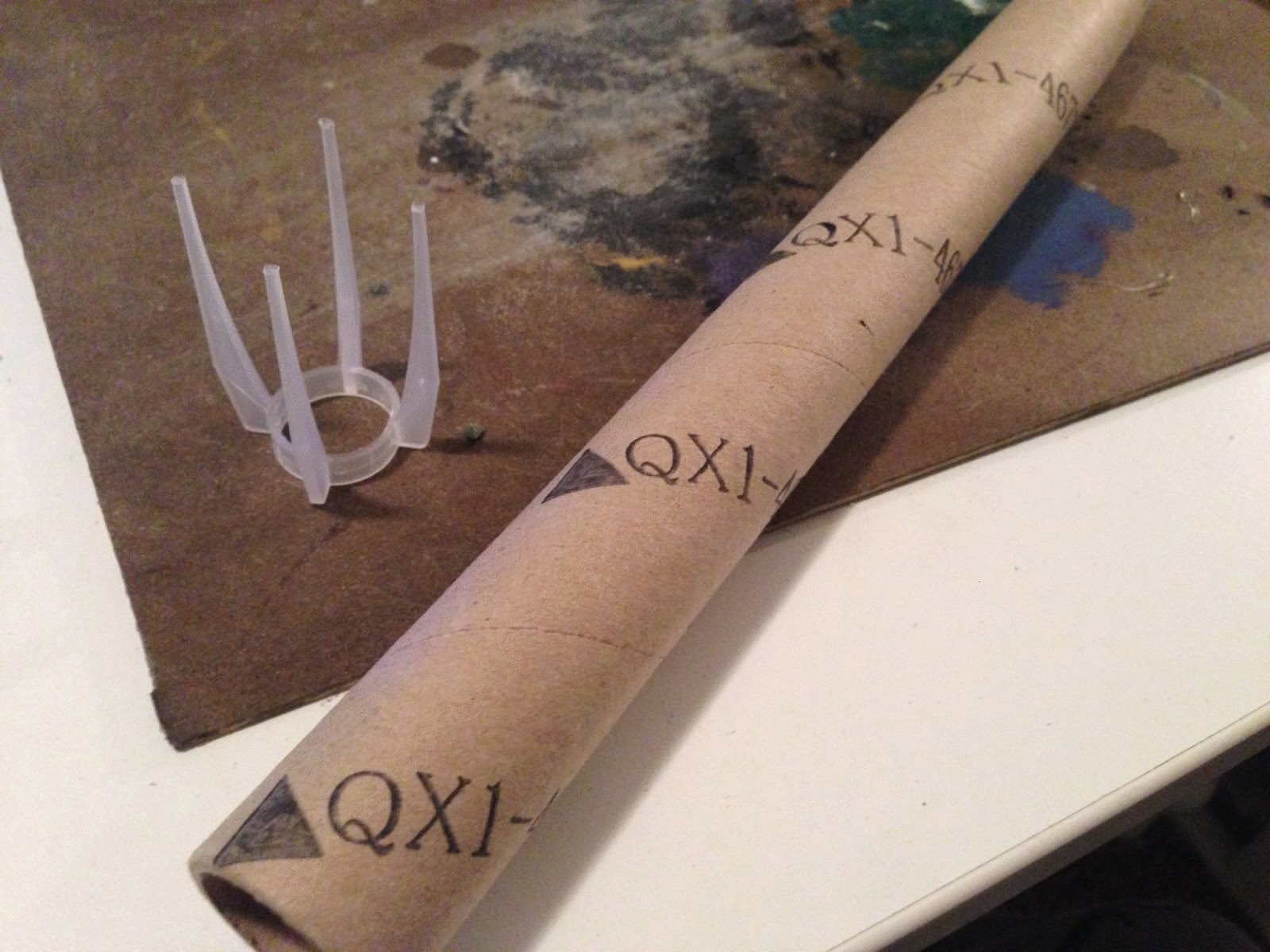 The key to this whole project really was the plastic bicycle cassette holder. I am an avid and long time competitive cyclist, and geek-crafts and table top gaming were always the perfect way to spend recovery time growing up. A bit vintage now, and no one would ever guess at my "secret life" as a hard-core D&D geek and collector, but its amazing what bits of plastic, metal, wood, and paper can be made into given a slight "twist" to the perception.

Some background on the Dragon's Head project: 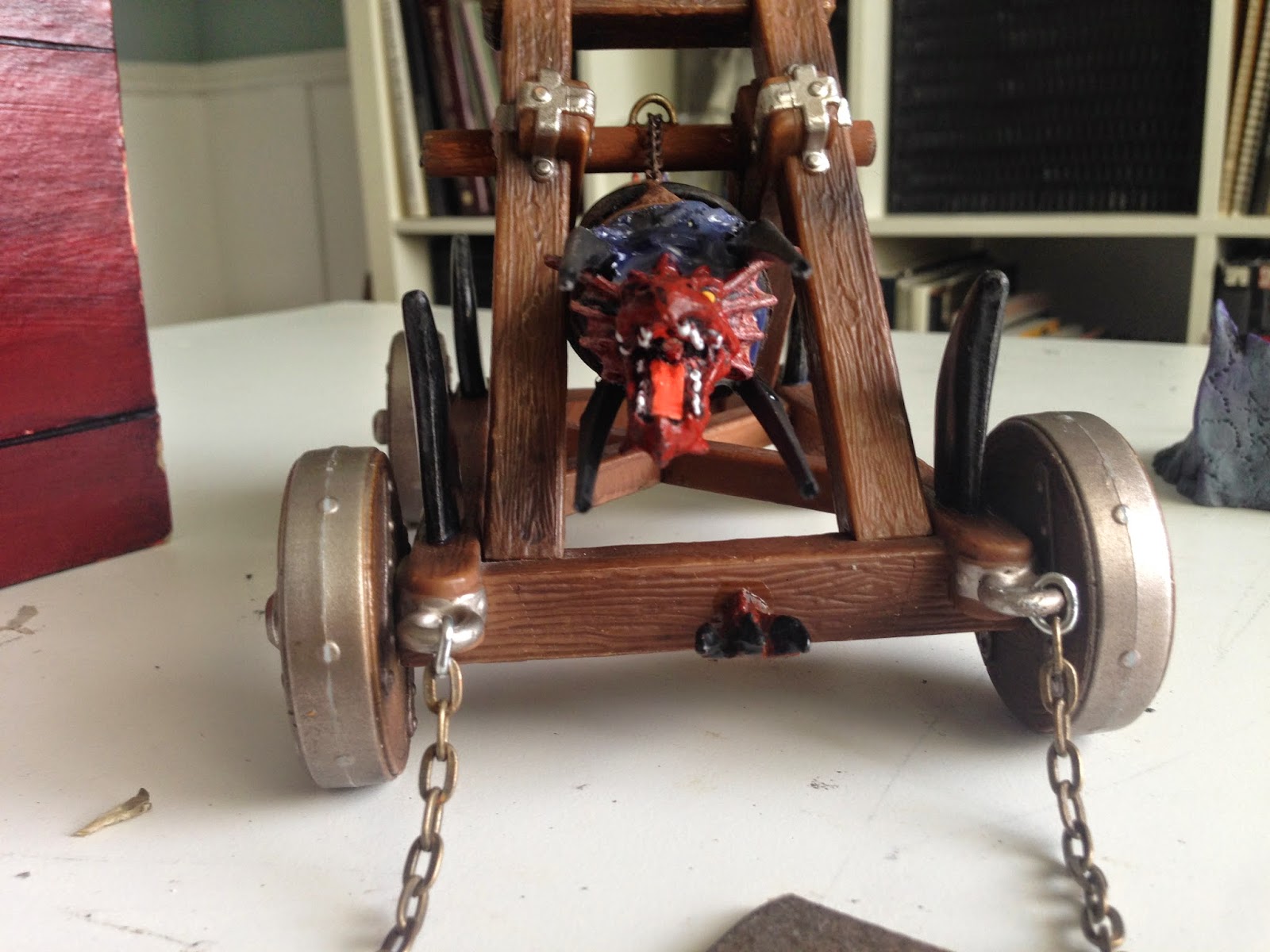 At a recent thrift store scavenger hunt (which seem to happen almost weekly) I ran across this partially-intact catapult. While it's far too large for 25-28mm miniature scale, it did make for a perfect size massive" accessory. But it was needing one crucial element...a personality.
From the depths of the Ursus templars Tower I found an old plastic Red Dragon; chubby, a bit "fairy-tale" looking, and spouting a long plastic lien of poorly painted fire. The perfect candidate for "adaptation." Originally about $.50.

My compiled parts list then became a conglomeration of a discarded red dragon's head, an old plastic bicycle cassette holder, and a cardboard tube. When blended together with some old plastic decorative teeth beads, a few small wooden barrels, and some bits of discarded jewelry chain draped over a small wooden dowel of wood, the form of The Dragon's Head began to truly take shape. 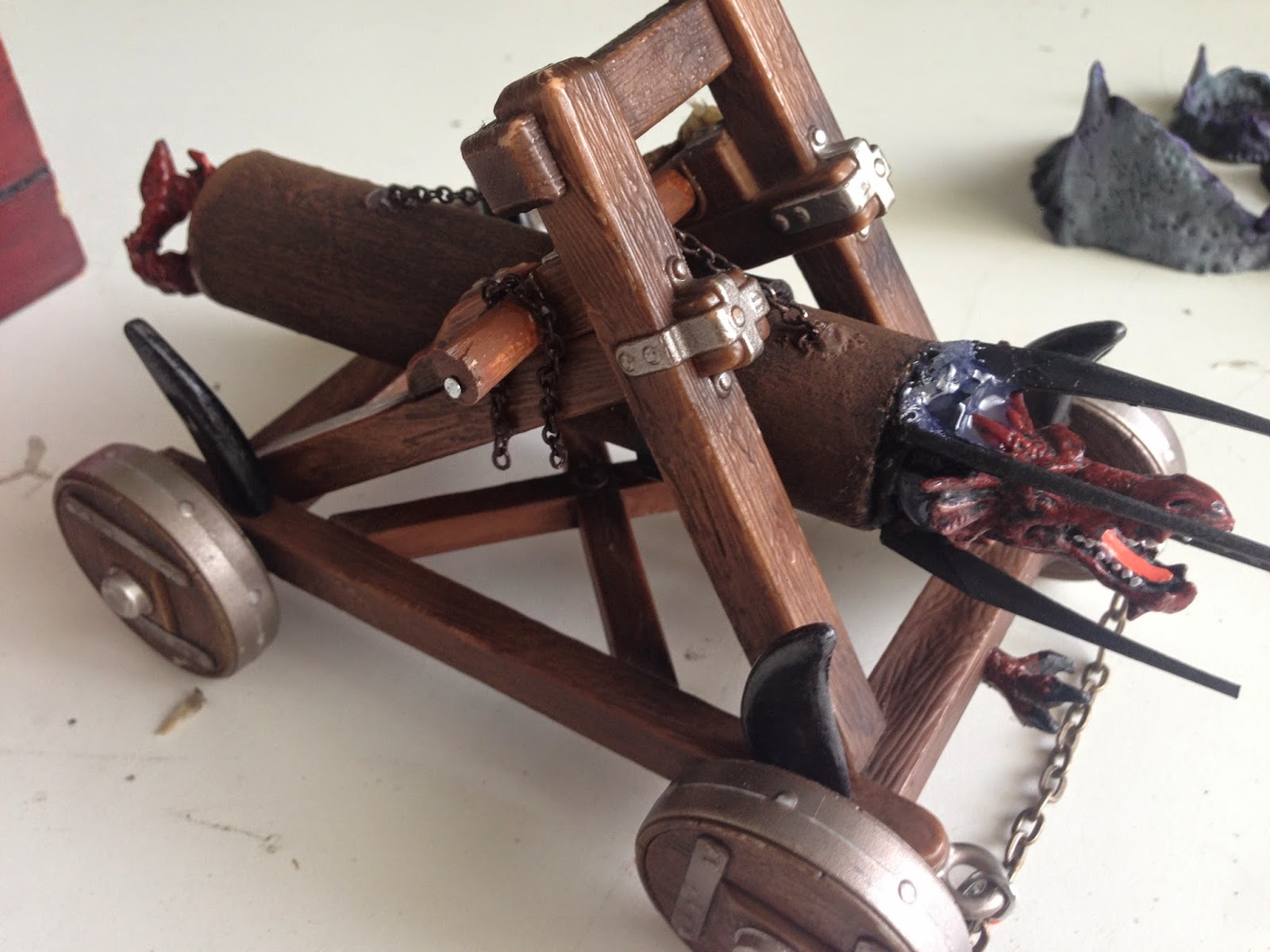 The plastic dragon head was added to the front of the "ram" made from a standard cardboard tube. The ram was needed to look like a massive heavy tree log, but shaped, scolded, worn, and sued for countless raids and sieges, not a freshly cut pine trunk, but an actual instrument of war and destruction.
The cardboard was first lightly sanded, then scored with a small metal pick to give the deep grooves of tree bark and wood grain.
It was then painted to look like a huge heavy battering ram with a  solid base of wood brown and dry brushed with a darker shade of chocolate brown.

An end cap of cardboard was added to the rear to flush out the base of the ram's trunk and the dragon's tail was adhered with epoxy to the back for a decorative effect. Perhaps to be used for pushing the ram forward into large wooden castle gateways and portcullis's.
When parted out, the front claw of the dragon also proved useful to add a decorative hook for the front of the ram as well. Again, decorative utilitarianism was the look I was going for here. A fantasy device to be sure, but one that had seen heavy use and some descent amount of ware and tear. With heavily detailed projects like this I always like to think "it's the little things that kill" or, at the very least, "it's the little things that make it real." A bit of extra rope hanging off a stub, an old exposed rivet in the side, chain dangling carelessly off to one side...the real workings of a piece of war machinery but in a somewhat more "industrial" style since this is primarily a dirty nasty weapon of Orcs and other foul things. 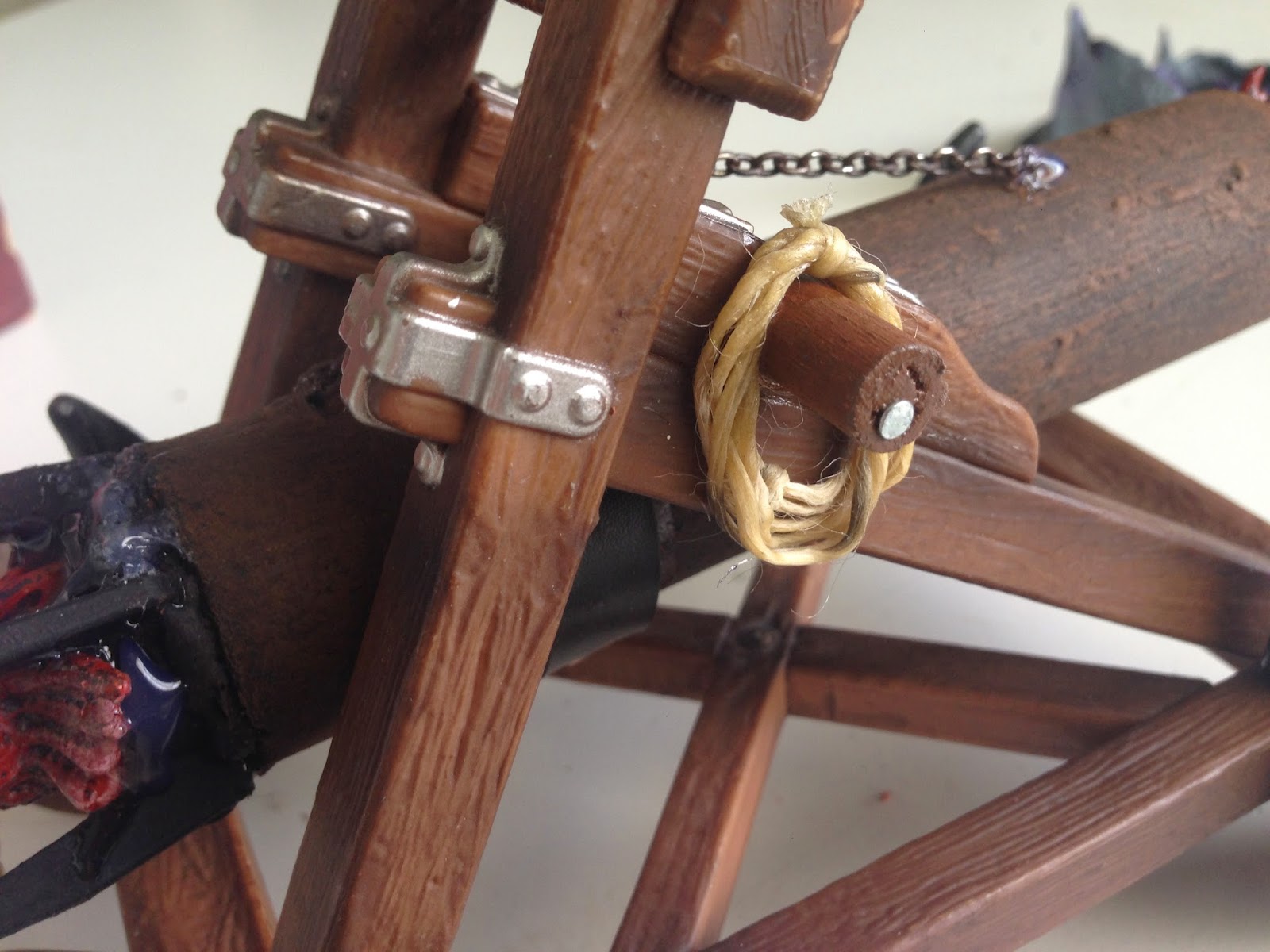 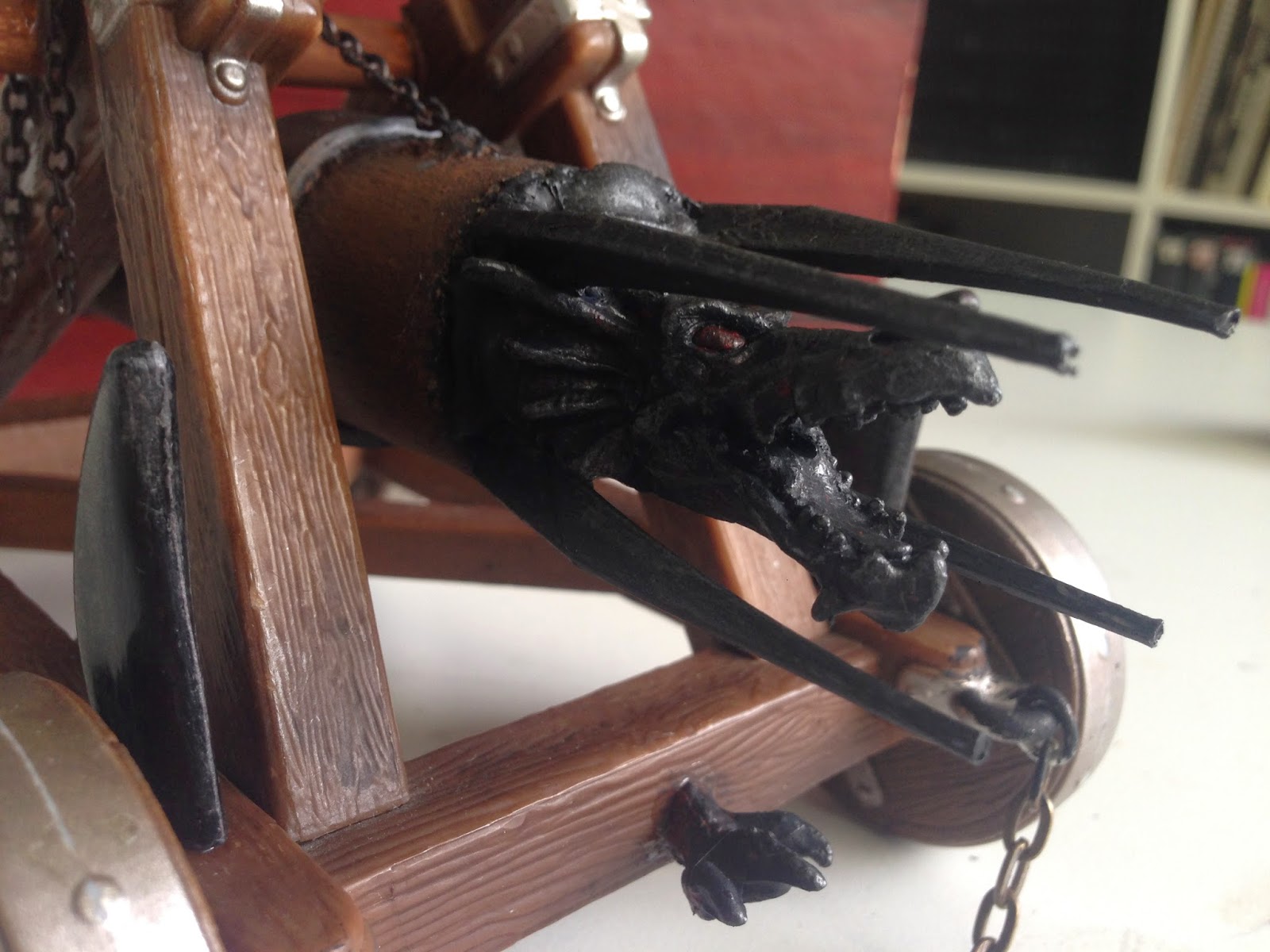 The Dragons head, while menacing in it's red colored scales, needed to look as if it was made from the same gritty iron as the large frontal ram spikes. I used a charcoal/licorice colored paint and then added dry brushed silver to give the spikes, the dragon'ss head, tail, and even front claw hook a light shine, like the look of old iron. A thick layer of epoxy was allowed to drizzle and drip and flow around the dragons head making it easy to keep it attached to the front of the ram within the spikes, but also to give it the look of molten brazen iron welds as well.
Such minuscule details are thought out and planned, but oft do not come out as visible as I would like in the photos. But ideally, these contraptions are for players, in person and at the table, where these minuscule details can add a sense of realism and wonder to the tabletop universe when viewed with the eye. 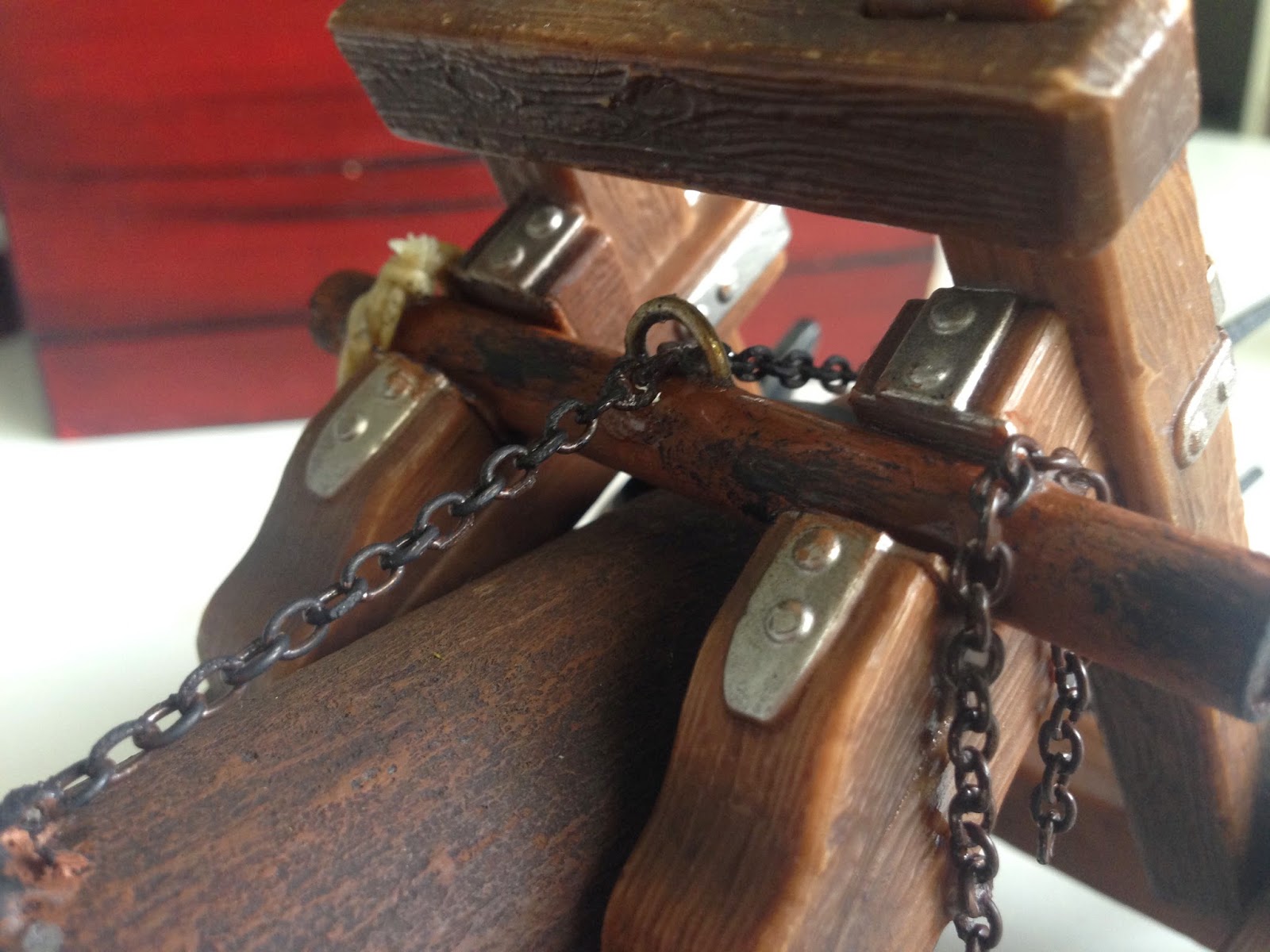 An example of the small details that add this sense of "tabletop realism" is where the battering ram chain loops through a small ring atop the wooden swing arm, giving the impression of real function over form. The ring is actually a small removed bit of the same chain used for the pull chains on the front, but cut in half and glued to the wooden support beam, then painted to look as if it has been bolted into place.
The detail on the "wooden" ram made from the cardboard tube shows the effect of the dry brushing over the sanded and shaped cardboard beneath. 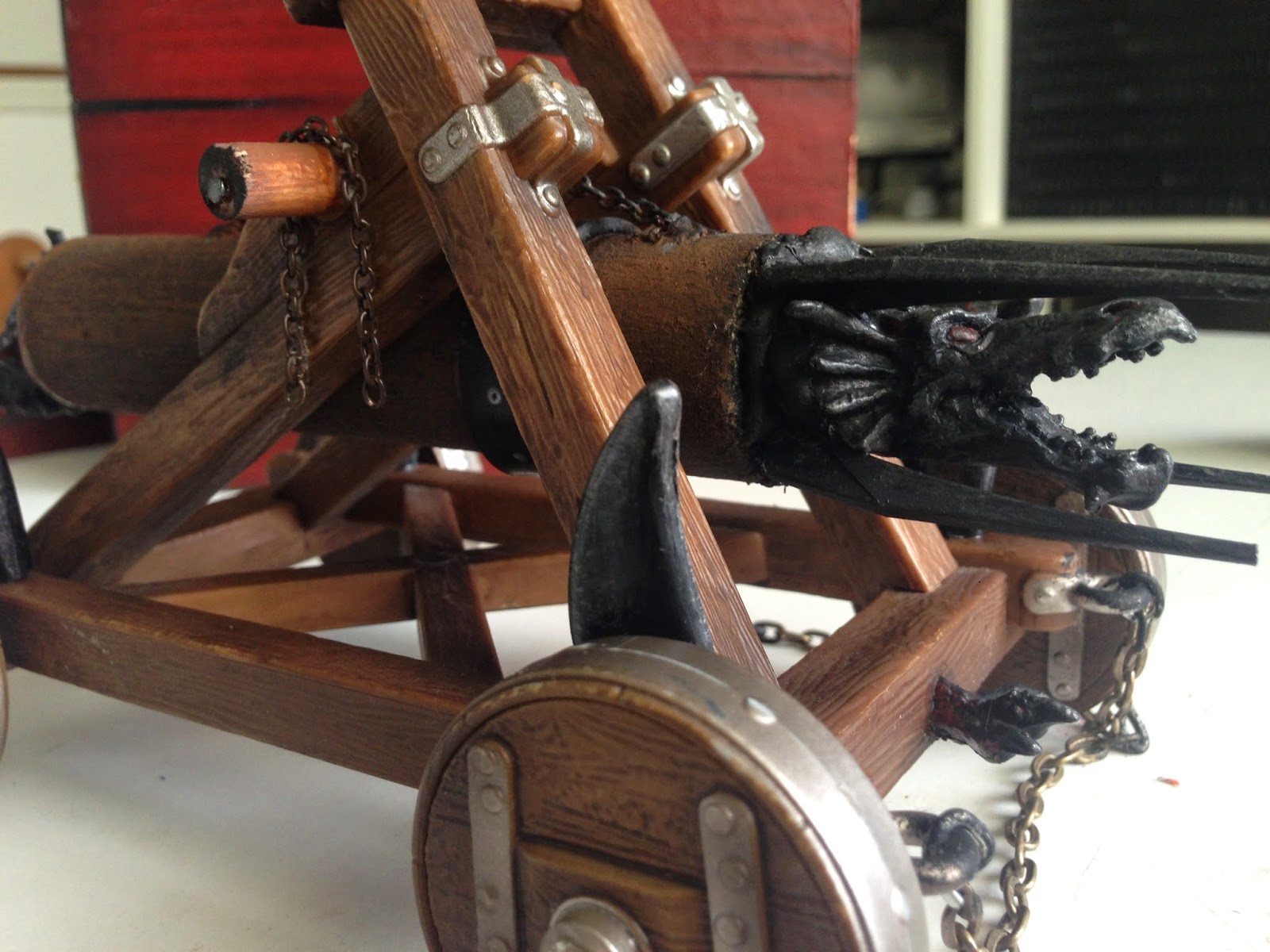 The large "Dragons Claws" add a menacing look to the sides, and add some stark, angular features to the roundness of the wooden wheels. These are made from simple cheap plastic decorative bear claw beads, available at most hobby, craft, and even Scouting shops. They were cut flat, sanded at the base lightly, and adhered to the structures axles. The shiny black plastic was dulled with varying layers of silver paint to give the look of forged iron and rusted metal. 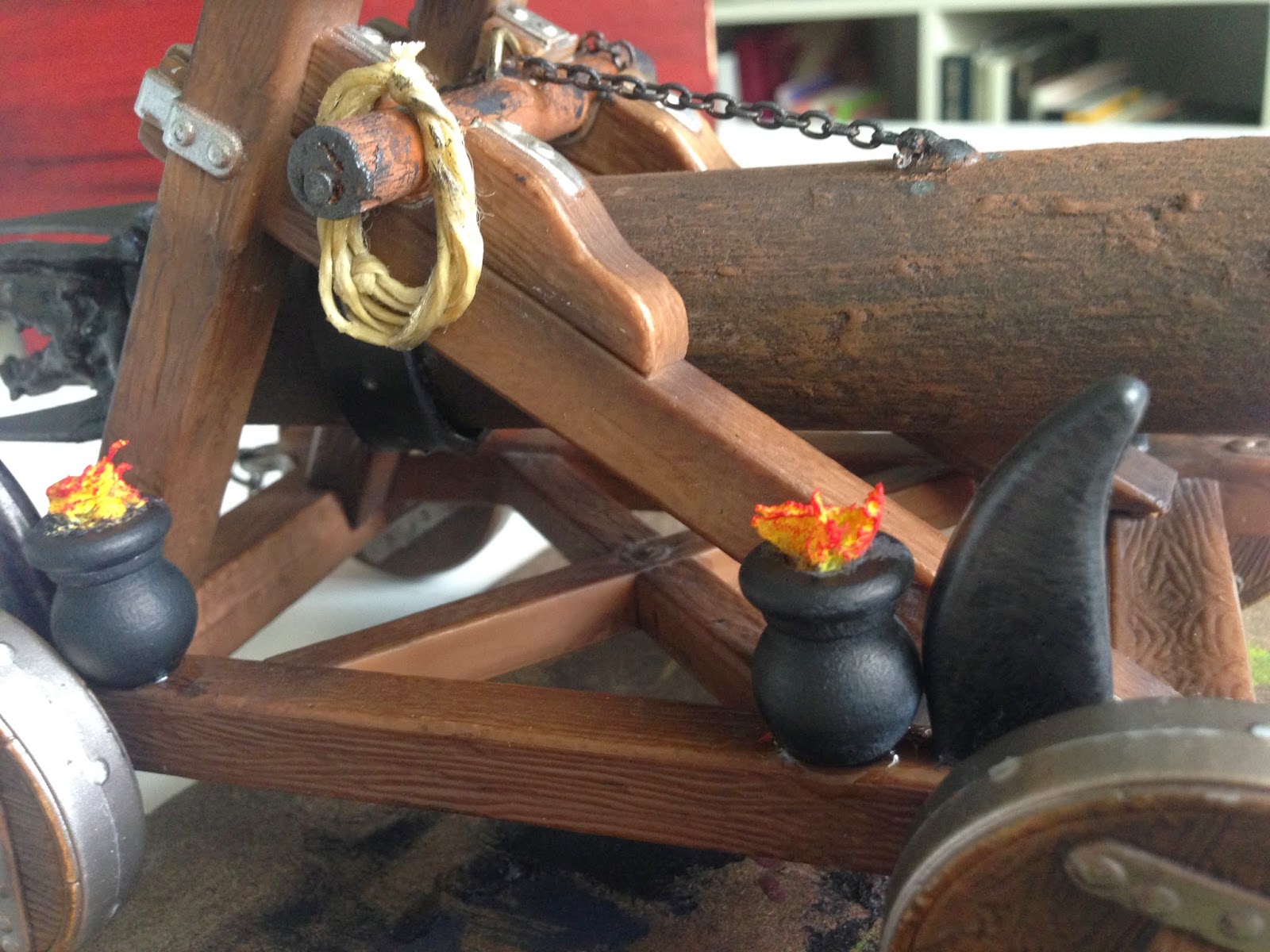 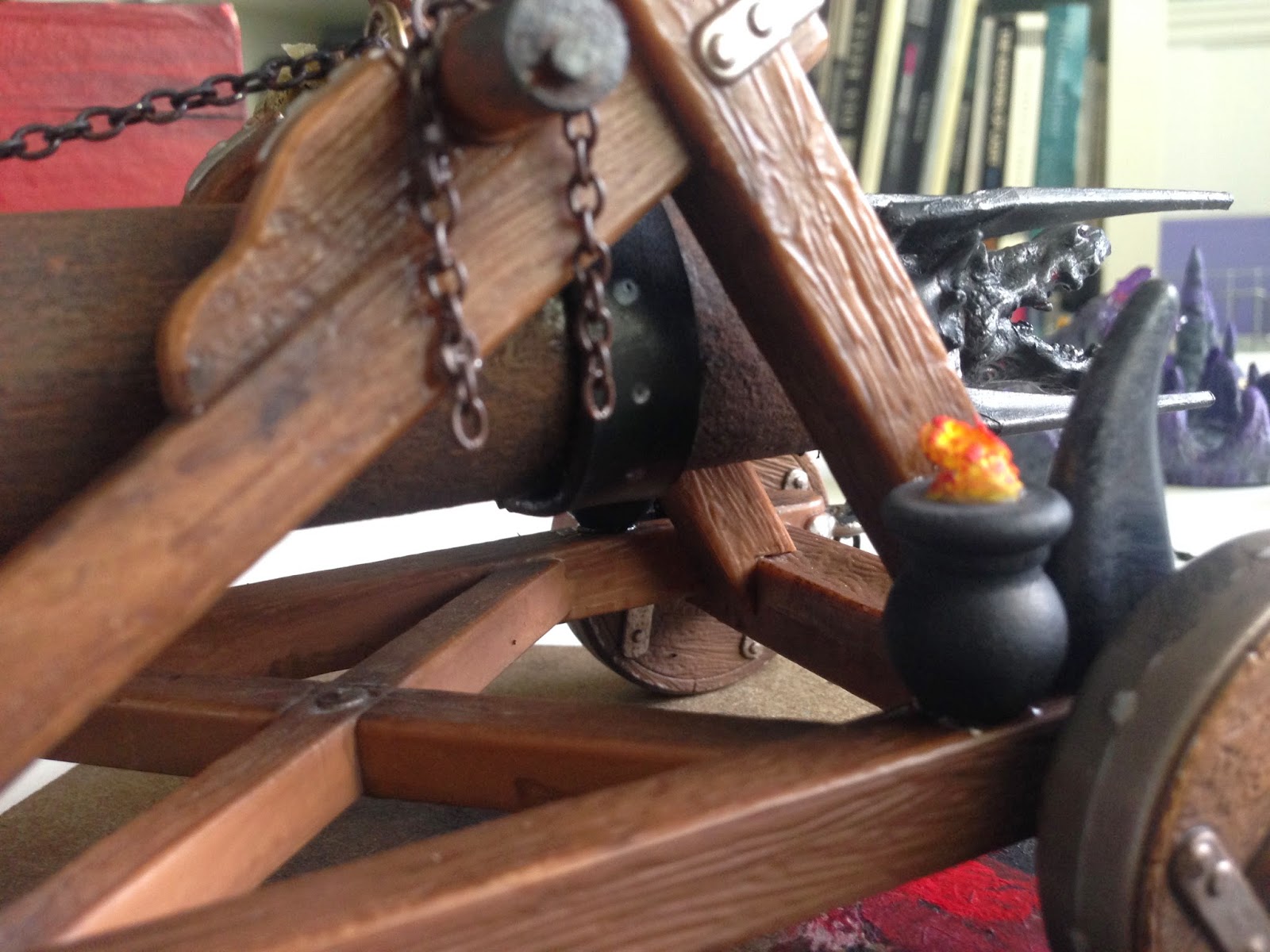 You can never have too many small vats of fire when it comes to creating machines of war on an Orcish scale. The small wooden drawer pulls, turned upside down and field with epoxy takes on the shape of flaming pots of fire, ready to have arrows dipped and lit for the coming assault. Layers of alternating coloring in a yellow, and dry-brushed red and orange give each pot a flickering, almost unique and carrying feel. Also note that the epoxy was allowed to dry at a slight bent angle. This gives a slight sense of motion to the direction the device would be moving, with the flames arching ever so slightly backwards towards the aft of the machine. 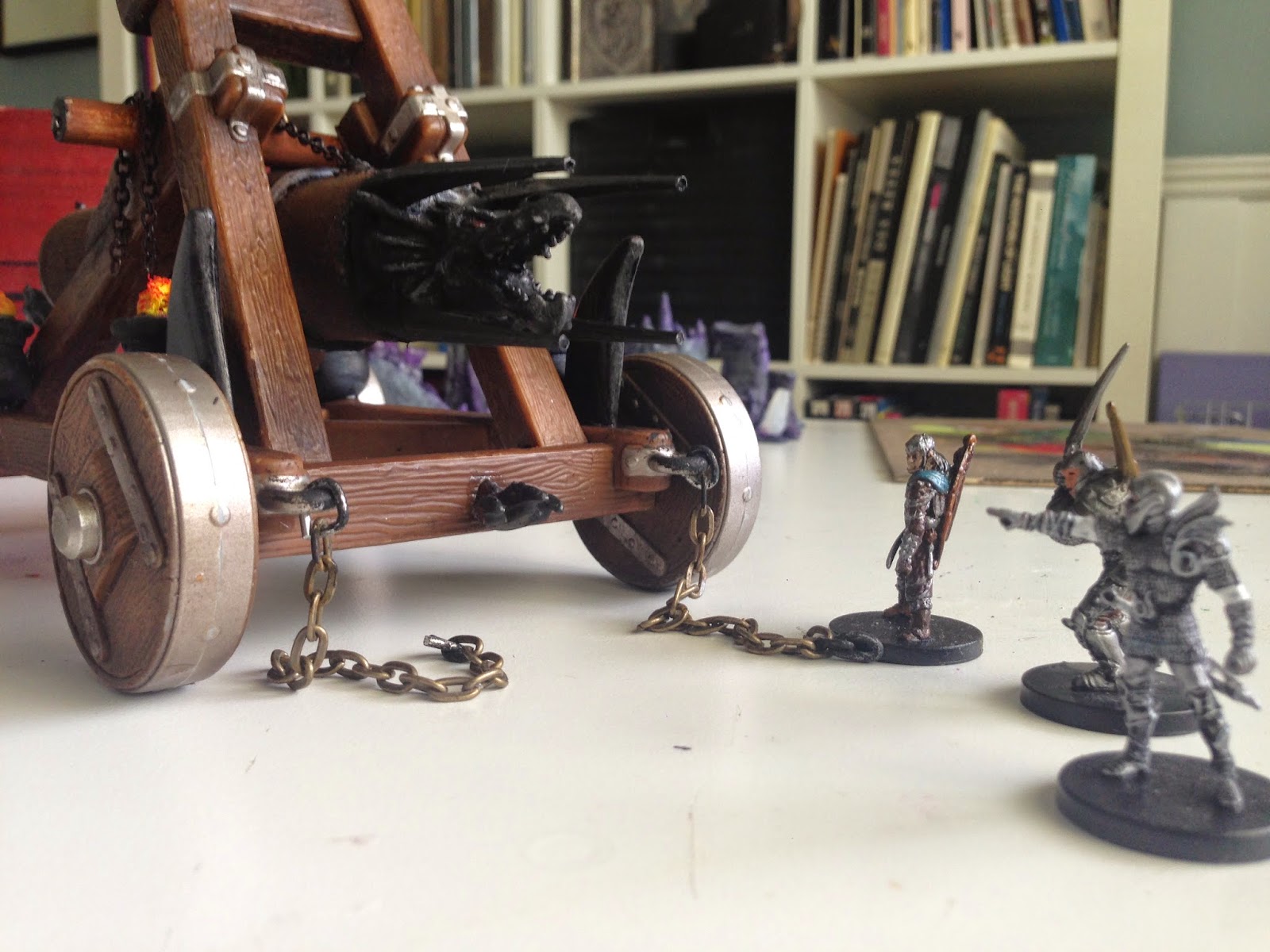 Just for size comparison, the device stands quite tall when compared to standard 28mm WOTC D&D miniatures. these three are a standard Aasimar Paladin, Redgar- human Fighter and a human Ranger. 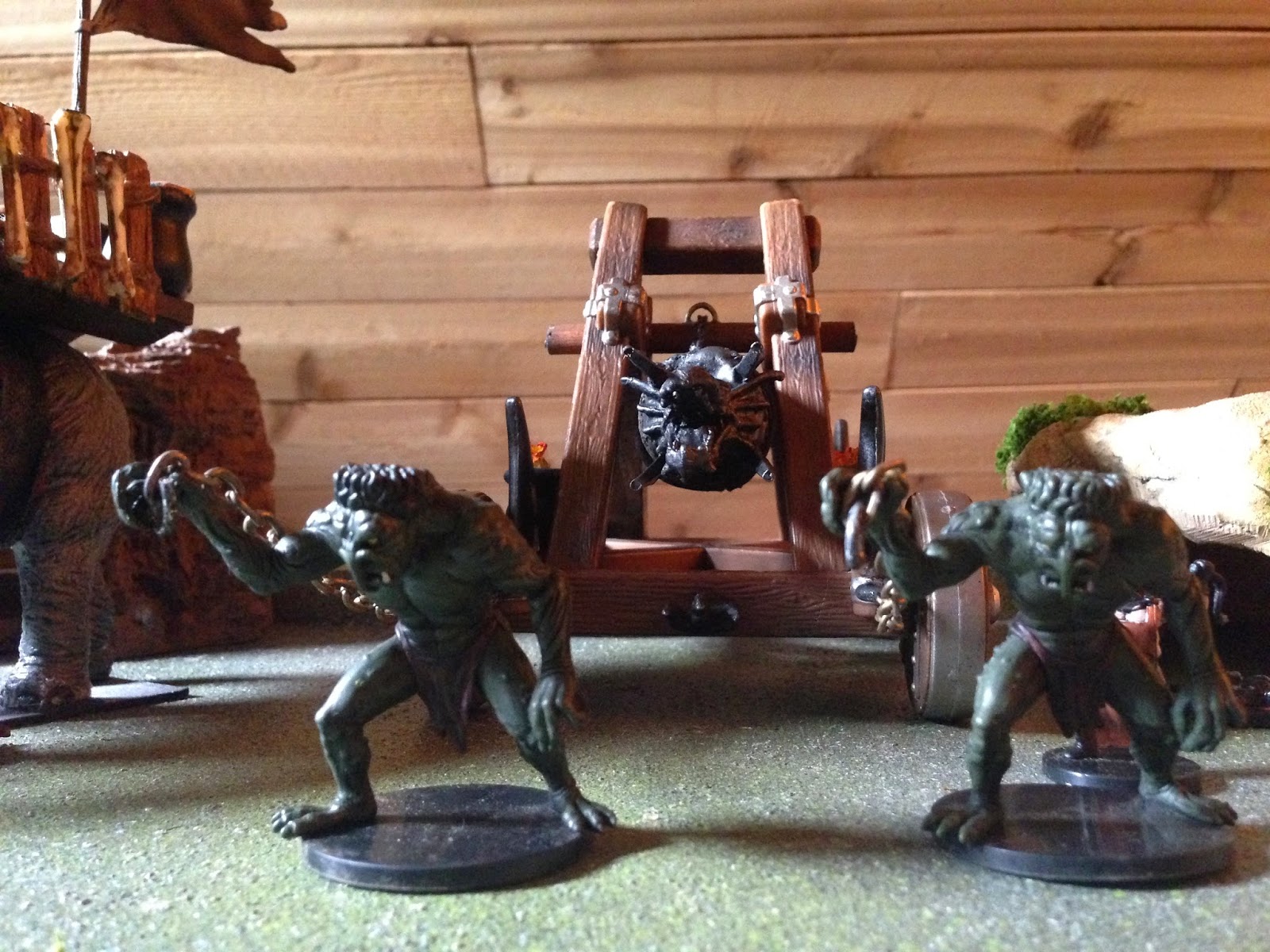 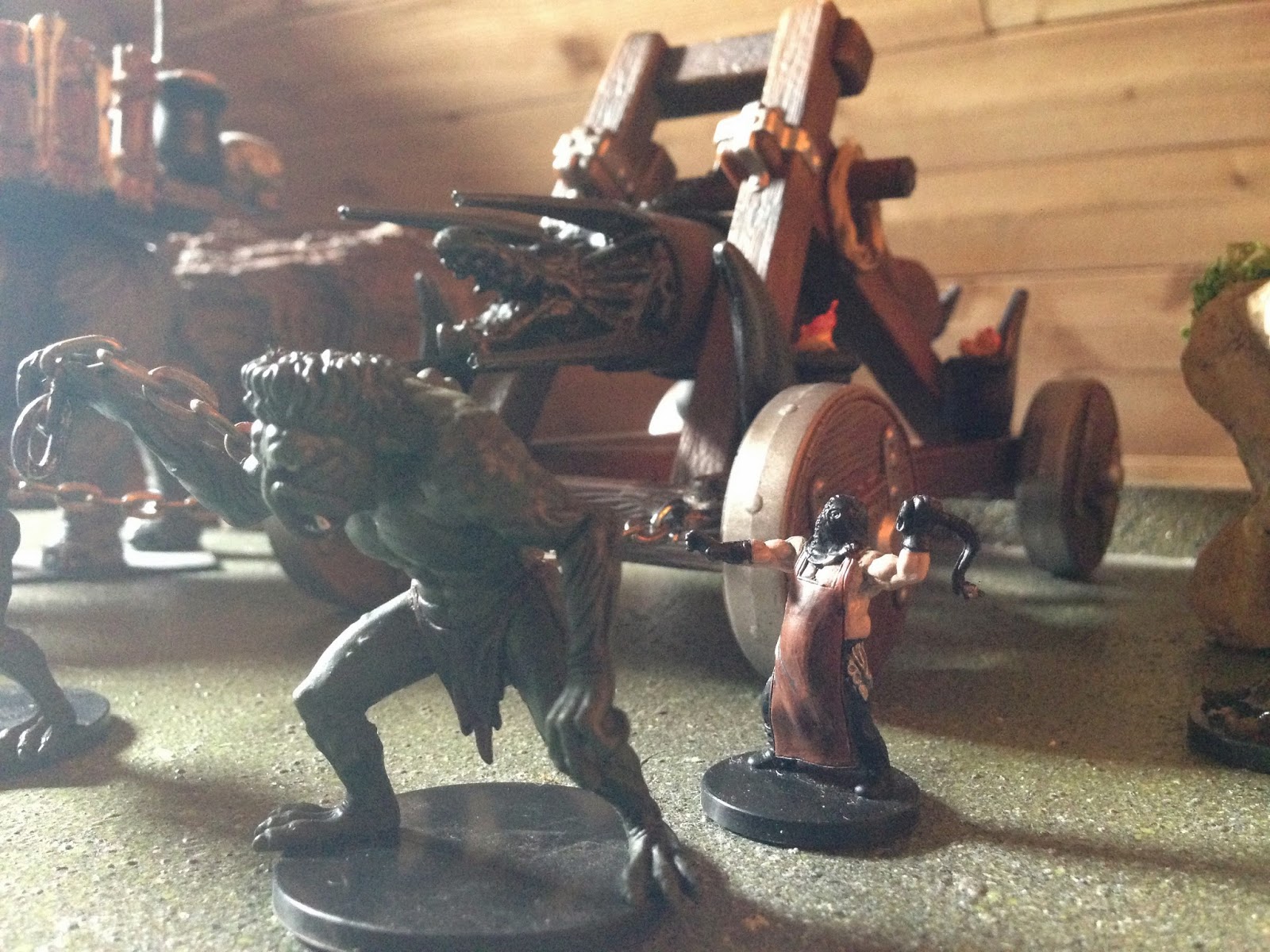 The frontal chains fit eerily well into the raised slashing claws of two trolls from the WOTC D&D line, followed by the Human Torturer mini with raised whip. Background noise aside, the device is just a bit large for a small room tabletop battlefield such as this one, but creating story hooks from the advancing horde is easy enough...

From the outskirts of the small forest Castle, the Orc army begins to emerge from the barren hills beyond. 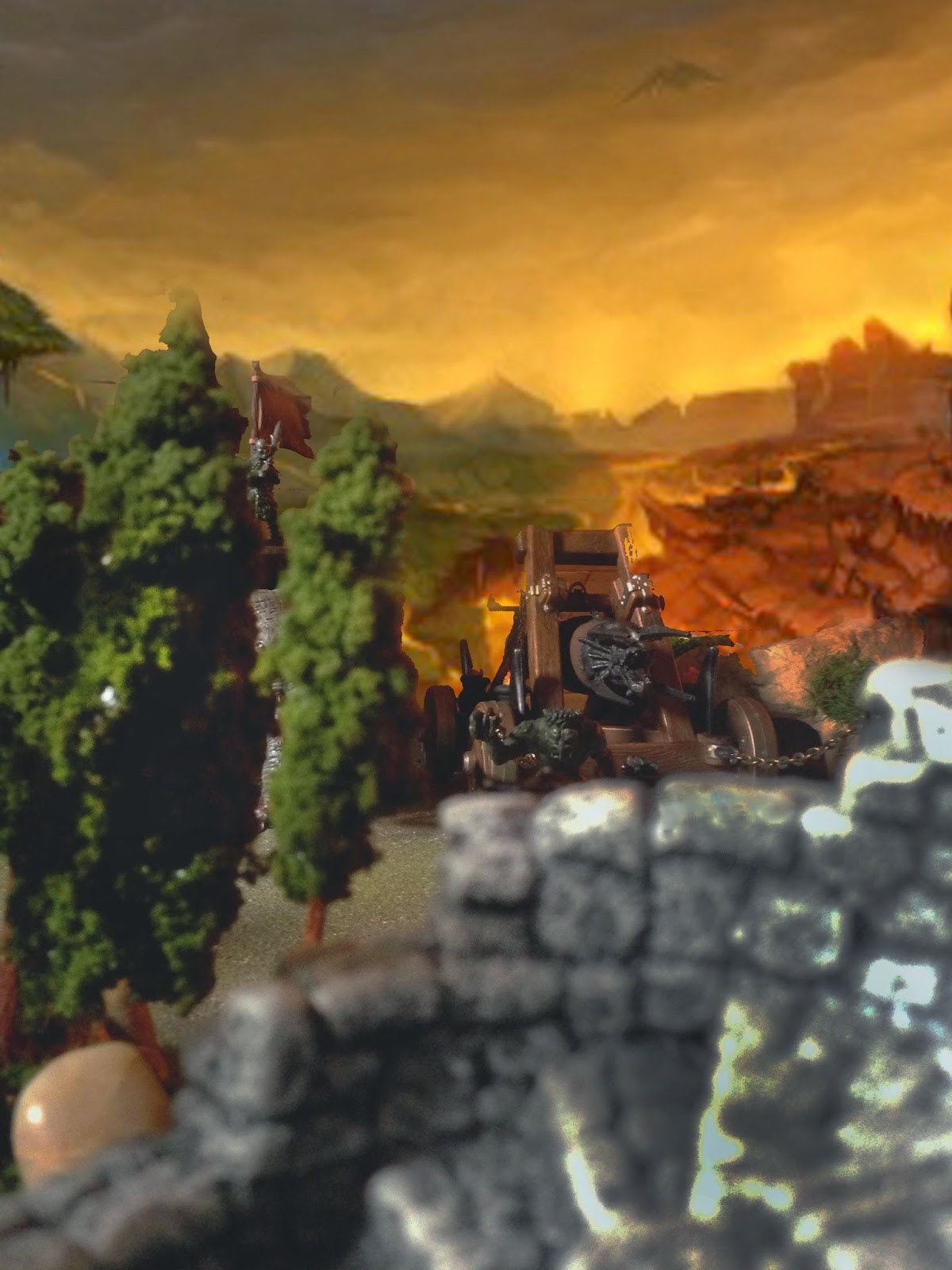 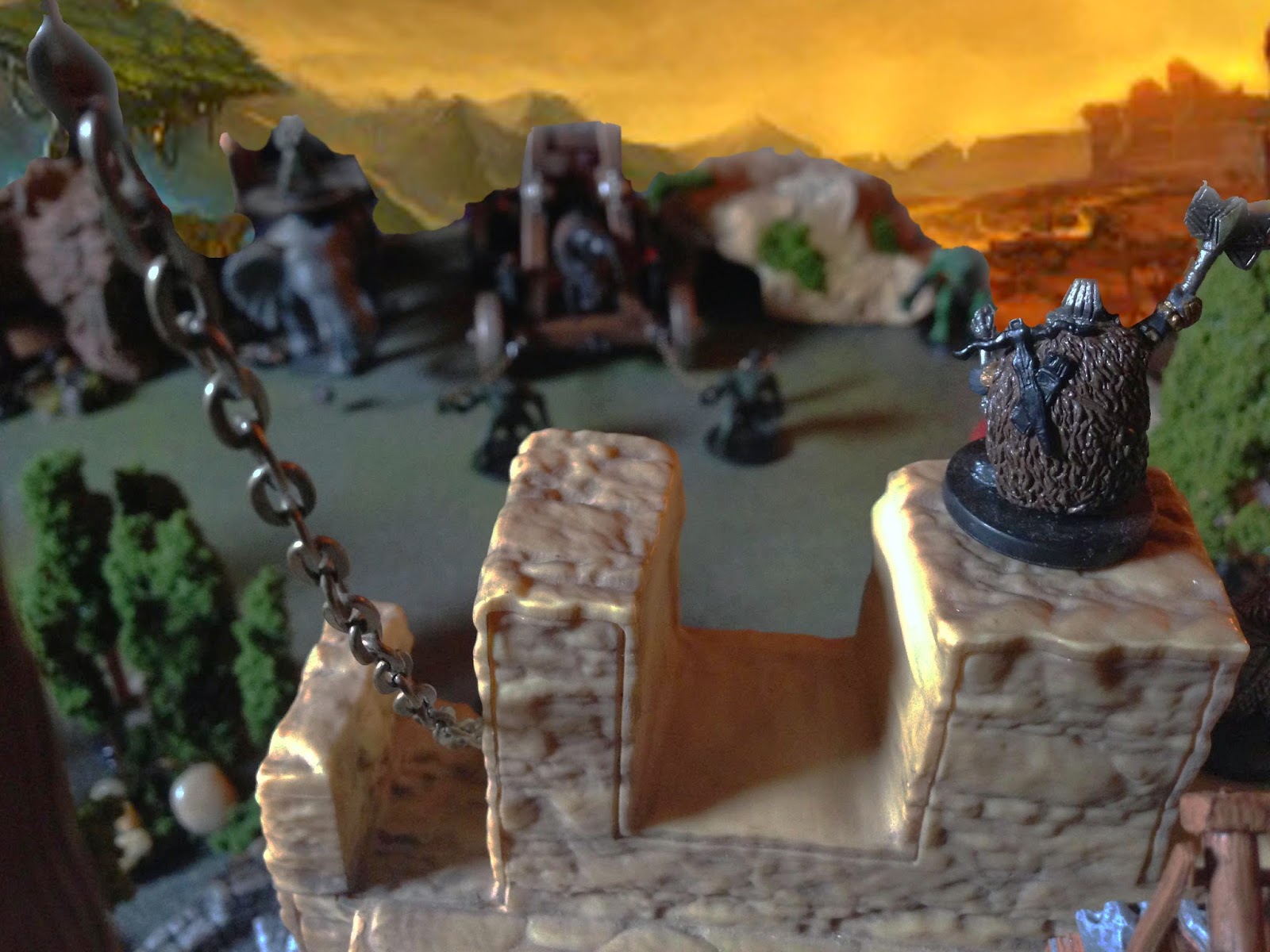 Darnehelm Lord of Mur Crag balks at their initial advance, paying no heed to the hordes beyond, or their giant war elephant...