By the pricking of my thumbs, Something wicked this way comes...

Making dungeon terrain and DM'ing often involves the "pricking of ones thumbs."
They may even bleed a bit. Winter is coming....something wicked always rolls in over the mysterious western mountains we have here, and with it, I begin thinking of the creative energy and mystical call of the gaming table once more.
Case in point, storytelling vs. rules.

Rules don't make for good stories.
Here is an example. Based on a true in-game event (thank you Sam...).

Scenario #1: Rules over Storyline
"Remember that time I moved 5 squares and used an extra turn to move another square and rolled a 20 on the polyhedral die and as a result, was able to remove the main appendage from the level 10 adversary and thus, deplete the foes remaining hit points to zero effectively rendering him out of commission for the remainder of the game?"

But here's the same scenario when you ask the player what happened after a good nights game, even years later:

Scenario #2: Storyline over Rules
"Remember that time I snuck around the corner of that massive cavern and using night vision, peered into the end of the hall and saw a massive Purple Worm emerging from the crumbling floor of the Underdark, then charged straight at it and rolled a natural 20 with my vorpal sword, and completely severed the entire head?! That was AWESOME!!"


Meet my nephew. Sam. And his brother. Alex.
They had some crazy first-run D&D (3.5 edition) characters. A Dragonborn Paladin with a Vorpal Sword and a Minotaur with a massive axe and a temper.
There was also a human fighter of questionable morals with a pension for Drow rings and a Human Paladin with a Dragon spear and the nickname "Sassafras" too. Both of whom were simultaneously devoured, and then soon after regurgitated by a Gargantuan green dragon by the name of Thraxus Mystcleave...but more on that some other time.

See a few years ago I decided I was going to start playing D&D again, just for fun, with my nephews on Sunday afternoons when we have 8 months of bloody-cold winter here in Utah.
We have this great family ritual where every other Sunday, we all convene like a swarm of hungry, laughing, loud family locusts on my Mother-in-Law's home and partake of too much food, too much noise, a bit of football, and a whole lot of creative little D&D scenarios.
But when Sam and Alex were younger, what I wanted to give them the "imaginative hook" that was D&D, was a good storyline, and the understanding that in this world, you can do, be, and create, anything you can imagine. there are no game borders. there are no "bosses" or "level quests" or strict roads to take to move on. I did not want them to think of D&D as a flood of rules and regulations of what you "could" and "could not" do in this imaginative world.

This is the only way D&D will ever be better than video games. EVER. Sorry fellow old-school role-players...but digital media is catching up. But....it still will NEVER ever truly catch up to our own imaginations and tangible, realistic, three-dimensional terrain and hand painted miniatures.
No amount of pixels, virtual reality, or first-person, point-and-shoot-interaction with complete strangers will ever hold a candle to the worlds and infinite landscapes of the human mind. And THIS is what makes D&D better...forever...than Video games. ANYTHING can be done in the D&D world. And there does not need to be a rule for everything....this is why 4th edition failed.
Our entire lives are governed by "rules."
Taxes. School. Jobs, Laws. Signs. Bills. All of it.
In the D&D world...in the world of the mind of every single DM, lies the potential to completely remove all of these blockages to infinite realms of wonder.
What there DOES have to be is a storyline...a purpose...a memory...and that is the weight and responsibility and job of a good DM.

And more cloaks.
DM's should wear cloaks.
Sorry. You just should.
Preferably green. 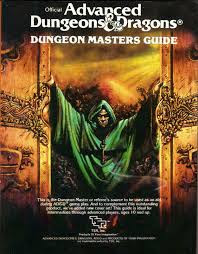