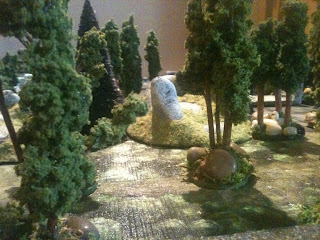 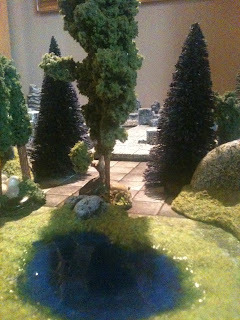 The varied forest flora and thick undergorwth make for a twisting, tightly bound border that some say, is as enchanted as the very heart of the Valardale itself. More than one chronicler has recounted tales of Treant's, Wood Nymphs and protective Dryads along the forest's edge; guardians of the sacred and holy lands of the Valardale region beyond. Centuries it has been since a traveller has ventured along this thin border, for as all know, Dwarves and Elves are no fine friends. And it was along this narrow stretch of sparse border, that old prejudeces grew strong, and some say, still persist.
No Dwarves now rule Caligh-Khazdule', and few Elve's look west to this tortured outpost. Its very soil is a cursed and stony growth, bearing no fruit or flower where once the great stone towers stood watch. This land holds tales of greed, of wrongs not yet righted, and of old allegiences fallen, where tree doth not grow, and only rock can bare the presence of the dark brooding past that hangs over the region like a festering malignancy. 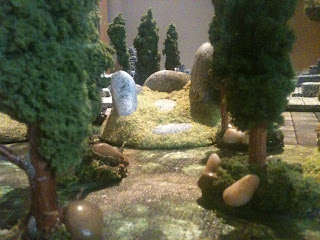 The most telling feature of the Valardale is it's sense of "watchfull emptiness," a pressence of hovering unease that one is always being watched by the hidden eyes of the Elves, although it is rare to see any stir within the thickly growing trees. This ever-present sense of foreboding keeps many away from the Valardale's sacred borders. But looking north and west, one may wish to stay close to those green borders for fear of what lies beyond the vale in the rocky regions of  Caligh-Khazdule.' It is along this border that the forest refuses to grow, encroaching only in small stunted trees along the rocky edges of this once magnificent outpost. 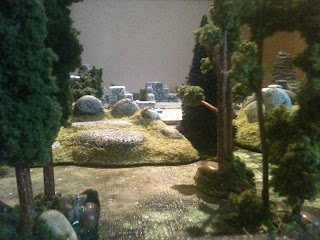 In the distance, past rocky outcrops and distant fog lies the visible ruins of Caligh-Khazdule', only minor walls and tattered stone remain to face toe cold winds and unending silence.

Putting together the last few posts that covered creating terrain, realistic trees, and developing story and plot lines based on minutre table-top scenery, comes a table top focused on utilizing all three:

Put together on one game board tabletop, they make an impressive modular wilderness and dungeonscape suitable for D&D gaming, small scale wargaming or as in my case, simply great storylines and photos.

The entire game board, pre-walls and before adding individual character miniatures. 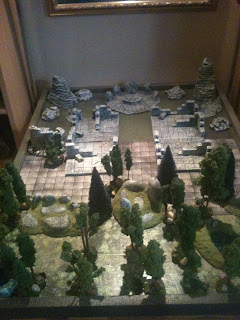 Looking down onto the wood portion of the game board shows the location of the forest pool and the overgrown forest floor stretching nto the stone tiles of the Dwarven ruins.
Wizards of the Coast Dungeons & Dragons Dungeon Tiles work great, but I prefer more three-dimensional terrain to go along with miniatures. The ammount of detail and artwork in the Dungeon Tiles is impressive, and work well for games on the go, but at home, they serve as excellent floor materials too. 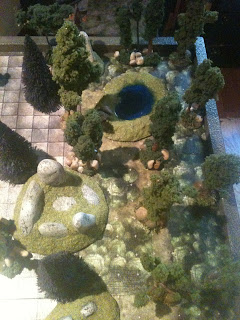 Somethign brews in the dwarven ruins of Caligh-Khazdule', something dark and eveil, long forgotten and left our of memory save for those tortured souls cursed enough to have witnessed it.
there are places on this world that are so full of evill, so open and direct a link to the realms of the ancient and dark powers, that the very mention of their name strikes fear and cursing into the ears of all who hear it. Caligh-Khazdule' is such a place.

It was not the Elves who drew the Dwarves out of their once mighty stone city. It was not the discomforting quiet of the Valardale, nor the tensions bewteen the races that left this great city in ruins, but it was the will and power of Orcus, Demon prince of the Dead, and the unearthing of his ancient temple far beneath Caligh-Khazdule' that was in the end, the doom for this great Dwarven outpost.

Soon, a foolhardy band with visions of wealth and adventure will set out seeking what they do not understand. They will carry weapons of war, and tools of their trade, seekign to challnege their wit and skill in the depths of the darkness, taking on the unnatural evil that fills this vale and the ruins it borders.
The foolhardy adventurer, how their lives are soon for not...