A Tome of Magical Characters and slaying the 3-Ring menace...

Let's face it, traditional table top role playing requires good old fashioned pen and paper, or at the very least, pencil and paper. Traditional character sheets, sheet protectors and folders to hold all the tis bits and pictures and shields and maps and details that a character accumulates over the decades. And there is no better way to simply, cheaply, and effectively keep these organized than in a traditional 3-ring binder.
There will of course always be the tech-savvy fantasy gamer who says "I have all my details online" or "I play Roll20 or Fantasy Grounds and its so much faster and more advanced! This isn't the 70's!" The irony of using this much technology to play in a fantasy realm that is, often times, not a whole lot more technologically advanced (obviously not Sci Fi) than the early 1500's, seems lost...but I digress...

Traditional, pen and paper, actual dice, hand painted miniatures, 3d terrain...these are the things I love about gaming. And I have rambled a plenty on this blog on the traditionalism of good l' fashioned Dungeons & Dragons, but the one piece of equipment that seem to always be at the ready, secondary only to a small pouch-style dice bag, is a folder of some form to keep our character sheets organized. And over the years, mine became so much more than just a portable storage device for multiple characters, maps, NPS's, and magical items. It has become a memory book...a scrapbook if you will...of my years of love and imagination and story telling that makes up the world of Dungeons and Dragons. 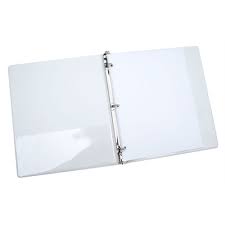 As a kid, I felt I really "stepped up my game" a couple decades ago (yes...decades) when I moved from an old Trapper Keeper to a white 3-ring binder with the clear plastic cover on the front. It even had one on the back! So much creative real estate! This allowed for multiple maps, childhood sketches, clippings from old issues of Dragon magazines, and even drawings created through the years. But there was always one lingering detail that nagged at my overly creative psyche: White 3-ring binders did not exist in "my" D&D world. I could get past the cryptic, colorful,  and strange numerological details of a standard character sheet. My imagination chalked these up to "runes from another world" that made up the living breath of my worlds populace. but the binder, sitting there next to an exquisitely detailed dungeon or an elaborately designed miniature terrain tabletop...just somehow killed the "magic" the moment your eyes left the map. And as I have always written about in Creative Dungeoneering, finding ways to "carry the game off the table" is the ultimate goal.
If it were up to me, I'd be part of a group of players that really in truly did come to play in costume...by candlelight....in a dungeon...but I know thats a bit too far for most.

So how to kill this modern tragedy so blatantly present at my table?
This past week, the 3-ring beast was finally played. Forever. And perhaps a new era of creative products will emerge. Surely I am not the only one who desires something more "in-game" with which to transport the lifeblood and memories and maps and details of our many, many creative worlds? And so, the Ultimate Character folder was created.... 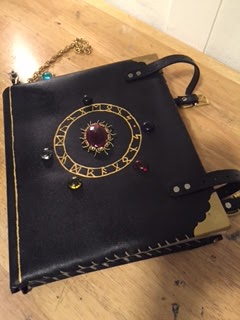 A Black and gold, jewel encrusted, leather bound, gold-chain-bookmark-hanging-thingy, with charms and runes and big heavy brass buckles that looked like it fell right off a shelf in downtown Waterdeep.

So for those kind followers on DM Scotty McFarland's Crafts N' Games group, and those who follow and appreciate the generous tips, tricks, and inspiration he offers, I present this quick tutorial.
Check out the DM's Craft YouTube channel here for even more amazing inspiration and creative ideas: https://www.youtube.com/user/theDMsCraft Meet my little friend.
He grew up sometime in the 70's when people use to sit around in polyester bell bottoms in rear entry ski boots at the ski lodge and sing Christmas carols along with Andy Williams, Jon Denver, and the Carpenters. Now, his kind can be found easiest at local thrift stores. Is it just me, or did cracking walnuts always seem to be a Holiday thing from the 70's and 80's? At least thats how I remember it. These little tools, now, from what I can tell, are obsolete and unused judging by the sheer number of them available at my local thrift store, but they are FANTASTIC for scraping leather, wood, clay, epoxy, hot glue, and just about anything craft related.

I started with a side of basic leather. I measured the total dimensions of the binder laid flat across the back (outside) and then cut the leather as one large piece, just slightly larger by about 1/8" then the total size (height and width) of the binder. Knowing I would stitch the leather over the top edge of the binder, this worked well and made it even easier to cover up the plastic edging on the standard 3-ring binder. Once the Leather was cut, I researched the Khazad runes (Tolkien) and drew these and the circle, lines, and edging on with a standard #2 pencil. I then used the walnut cracking tool thingy's (I apologize, I have no idea what the correct walnut-cracking vernacular is for these stronger than mithril tools are) and scraped into the runes, tracing over each until the leather was sufficiently carved in depth.

The next step was to lay the leather out under the binder and match up where lace holes were to be punched. This was tricky, and crucial that it be done before the leather was dyed since I was using a black sharpie to measure and plan where the lace holes would be punched. This would be nearly impossible once the leather was dyed black. Plus, I did not want the inside of the holes to show the natural leather color once they were punched and laced. I wanted this "black as midnight, black as pitch. Blacker than the foulest witch" to quote the Goblin Blix.
Holes were punched in the leather all along the edges, but leaving enough to allow for strength. Secondly, holes were punched through the vinyl and cardboard inside, of the binder to match up with the leather holes. the walnut pick tool came in very handy again here at punching through both plastic vinyl and the cardboard interior, and ensuring the holes were free of any dangling bits of plastic, cardboard, or leather.


After the holes were punched through both the cover leather and the binder, it was time to attach the leather straps. These were cut by hand with a  big beefy pair of scissors, and made from an old belt. The straps were attached along with the riveted buckles both front and back now, so as to hide the inside rivets between the binder and the leather cover. Because this work involves hand-hammering the rivets, I wanted this done in the early stage so as to avoid any damage to gemstones or paint applied later. 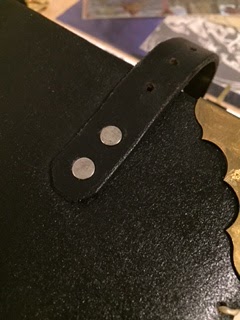 Tandy Leather brand black dye was then used over the runes and holes, applying it to one side before allowing to dry. I then reversed this, dying about 2" all the way around the other side (inside). This side wouldn't show, but doing so allowed me to cover any potentially visible gaps in the same black leather and give it a solid, clean "pre-dyed" look. Remember...MAGICAL EVIL...or just magic. But all black. 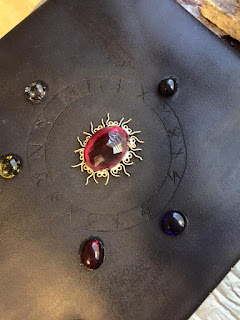 While this picture shows the gems already adhered, I did not add these until the very end. But the runes, post-dye, should still be able to be seen through the dye if they are carved deep enough.


I used waxed sinew cord (available at most hobby shops, leather supply stores, etc.) and started at the top right side, inside under the leather cover, hiding the knot. I then laced all the way around the edges, overlapping the leather to the inside, over the edge of the binder and continuing with the same single strand until I reached the top of the left side. Pulling from the same strand was tough, and time consuming, but here is why I went this route: The single strand proved stronger, and I could easily hide any knots on the inside of the binder if I was only using one strand rather than multiple small sections. Think of it as a long, long, long....long....shoelace kind of. And again, the walnut cracking tool was perfect for looping under the sinew and pulling tight each strand as I moved from right to left, tightening each and as a result, pulling the leather in further over the vinyl edge of the binder.
Corners were tricky, but leaving the leather to "bunch" a bit on the corners seemed to work great, and give it a more natural look. These corners were also going to be hidden with brass corner edging too, so other than the inside edge, any buckling is invisible. 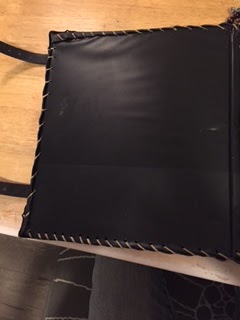 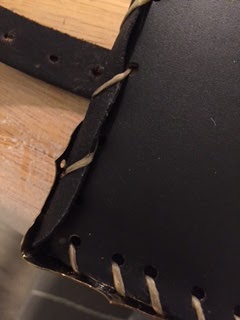 And this is where the fun started.....
the excess sinew was left dangling at the top, and wooden beads, charms, and magical items were added to the hassles. Lastly, I added a strip of sinew under the three ring binder clasps to adhere a heavy gold braided chain. This would serve as a bookmark and placeholder. This piece looks amazing in real life. Its ridiculously heavy, might be really valuable (I have no idea), but came from vintage jewelry acquired at a family garage sale. It matches well with the brass buckle fittings and the corner edges. 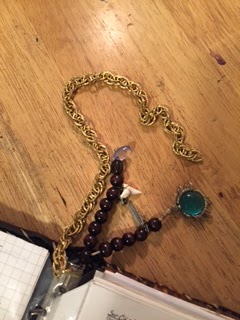 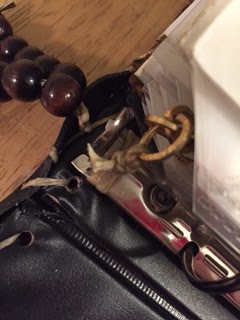 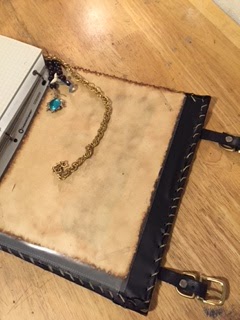 Map paper stored in the back of the binder along with the traditional "white graph paper" but yet, somehow, they look better with a  bit of medieval bling nearby. 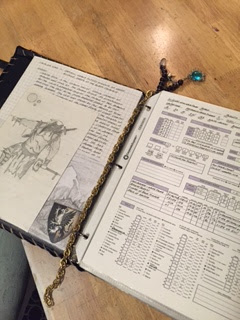 The final two steps were to add gold metallic paint into the carved runes that were grooved into the leather before dying with the walnut pick. This was done slowly so as to give the gold the look of being "poured" into the runes. A few dos here and there add realism, and I allowed the paint to drip off the tip of the brush and fall naturally into the carved grooves of the leather. 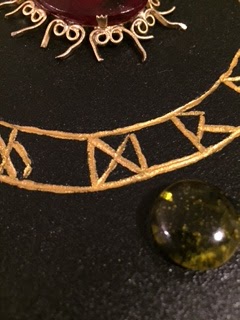 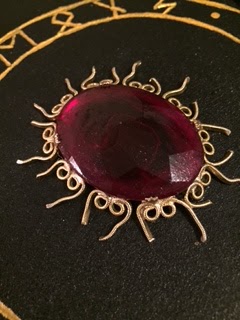 Lastly, a gloss varnish was dabbed over each gemstone. This gave the stones some depth, and also some sheen as they sat embedded in the black leather. 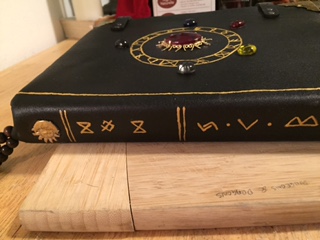 Gold was added to the spine and the binding, along with a metallic magical symbol on the top, made gold with a  finger tips worth of Gold "Rub n' Buff" paint. 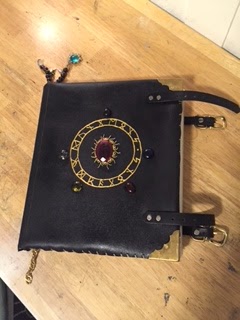 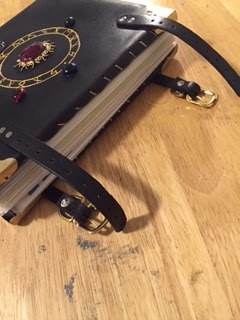 Safely hidden from the eyes of Eliminster, the travesties of the modern world can be all but forgotten once the tome reaches the sacred table for a nights adventure!