Jeweled boxes and a Chest of Tiamat!

In an ever-increasing love for all things RPG and especially, D&D, that do not directly relate to the game itself, I started creating a few D&D specific "off-table" items.
At my local second-hand store I often find these large vintage wooden silverware cases used for fine silver, dishes, and the like. They are often constructed from a  thin wood, but have felt or silk linings, and a great shape for storing Wizards of the coast miniatures.
But anyone can put minis in a box.
I wanted to create something that looked like it belonged IN the game, not just something that represented it. This can be used for maps, hidden runes, clues, or magical items as well. The object here was to momentarily take the game beyond just what our characters are doing and involve the players themselves in a real, 3D, tangible world of gameplay, off the table.
We often live lives through small 28mm plastic representation of our being while in play, but with more frequent use of tangible life-size images like this, I hoped to take that one step beyond.

This first D&D box was a simple single compartment affair. Wooden box, red felt lining, and a soft finish to the outside stain; perfect for creating a vintage old-school D&D ampersand symbol with a  few runes. For this box I utilized the original D&D 1st edition, TSR-style ampersand to give the box an "old-school" feel. I left the scratches, wear, marks, and patina to the wood, re-staining very little portions of the box. I really wanted the age to come through and the vintage quality of the wood to be tangible. This allowed the box to "hint" at a history all of its own, adding a sense of realism and truth to the fable that would eventually surround this treasure and its potential use in gameplay.
Where had it been?
Who owned it?
What did they store here?
Where has it travelled?
What ageless wizard stored his most prized scrolls within this container?
What spell book once graced the blood-red felt lining?
What jewels and tokens of Faurun, the Flannes, or Krynn were once stored inside? 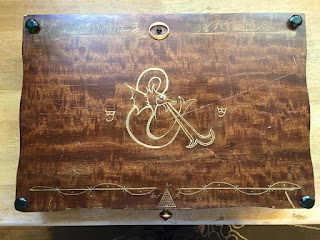 The top lid was carved by hand into the wood, and filled with a gold metallic paint.
Gemstones and arcane symbols were added to the top, along with 4 large emeralds at each corner and a small but very intense green jewel in the center of the gold oval. Elvish runes were added across the top and gold scripting carved in along the bottom edge of the lid. 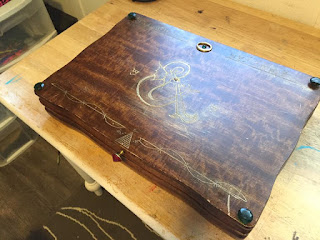 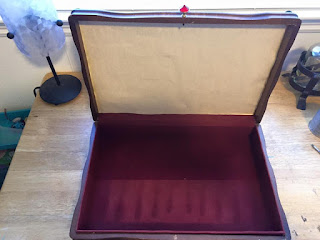 For the inside, I left the red velvet intact, and made a thick, parchment lined lid. The parchment can be removed, allowing this box to work as a prop for in-game play as well.
To add a sense of "magic" to the box, I made a custom ruby and gold handle for the lid. This triangular red gemstone points out from a  gold brass handle with an amazing sense of realism and gives the box a fantastical look. 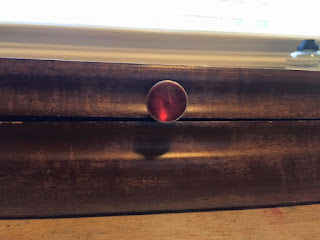 Finding this first version to have been far more enjoyable than I expected, I wanted to create something that would become a real treasure, something that would last years and hopefully, hold my constantly growing collection of Dungeons & Dragons miniatures. Enter the two-story drawer style Chest of Tiamat. 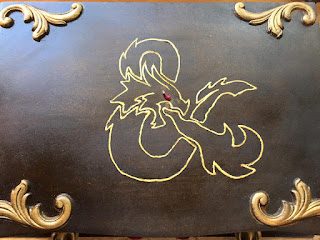 Using the D&D 5th edition ampersand as the main focal point of this chest's lid, I began by sanding the entire box down but leaving large portions of the old wood to show through. Like with the 1st edition box, I wanted to retain that sense of "age" and "history." The wood and is pattern, wear, and age, was vital to add depth and mystery to the appearance. Unlike with the first edition box, I removed all liners, surface material, and inside backing. This needed to be truly unique. 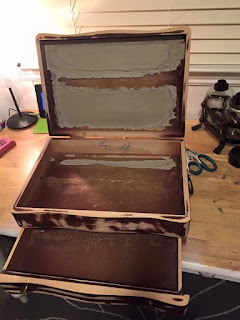 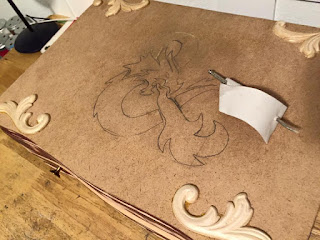 Once most of the original wood surface texture was removed, wood appliqués were added along with the carving of the ampersand. But in addition to the 5th edition Dragon, I wanted to add runes, scripting and even some light Celtic knot work to the boxes lower portions.
The carving was then followed by the long, tedious process of burning in the channels were a thick layer of Citadel Rolled Gold would be added, giving the runes and script work the look of true gold fill, not just paint. After all, this was to be a Dwarven treasure, created to honor, or warn, of a long distant memory or a grave battle with the Demon Queen of Dragons. The gold could not simply be "painted" on. It needed to be drizzled, slowly, by ageless bearded craftsmen deep within the heated bowels of some long forgotten Dwarven citadel and forged by fire, sweat, and pint after pint of Dwarven ale... 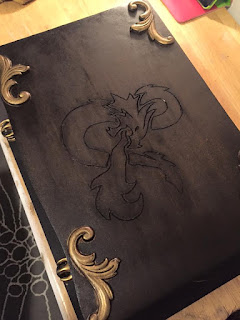 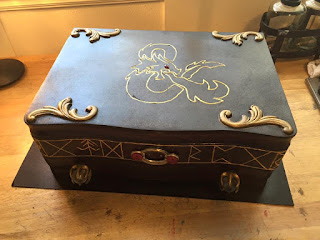 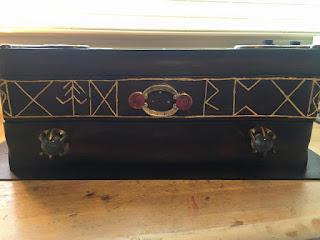 Runes and gemstones were then added to the front section, along with the gold metal clasping claws of dragons feet holding large crystal orbs. Two large rubys and a smaller bloodstone adorn the center gold ring along with delicate scripting and symbols surrounding the center. 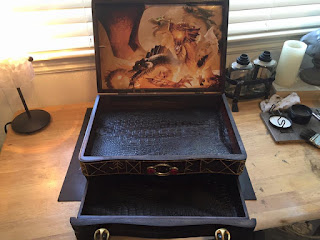 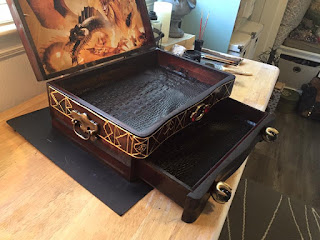 Large brass handles were added to the outside of the box, both left and right, where the runes and knot work wrap the edges and intermingle behind each ring.

Lastly, a large full-color glossy print of Tiamat herself was added to the inside lid, along with "dragon skin" leather linings to both the top and bottom drawer shelf. Simple felt would not do for this box.
The Dragon skin was found at a local craft store, and measured and cut to size before being carefully adhered to the base of each compartment.

In the end, this box, originally intended as an item to be sold, will likely be placed as a treasure of great value in my gaming tower, hopefully to one day meet the eyes of lucky (or unlucky) adventurers who dare venture into its hidden chambers.