For the Love of Nostalgia... 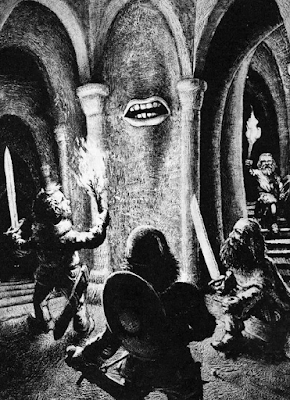 It's been a while since I've used this (rarely visited) blog to wax nostalgic about good ol' fashioned table-top role playing. But I have recently came across a FB gown called Black and White RPG art that I absolutely love and that's re-kindled my love of old school gaming.

I have always held a special love for used books. Especially damaged, worn, torn, water stained, and even fire-damaged covers and pages. The more "adventure" a book, especially a role-playing book seems to have undergone the better. 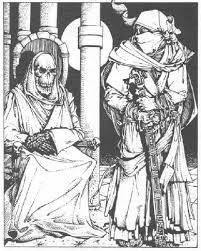 And nothing captures this nostalgic look and feel of 'real adventure' to me better than the vintage late 70's to early and mid-80's Dungeons & Dragons and Advanced Dungeons & Dragons black and white artwork. The above image was probably one of the first I ever remember seeing at an early age. Something about it captured me entirely. I just fell in love with the idea of a group of adventurers walking down this long forgotten hallway deep within the earth somewhere, and seeing something so out-of-place as a mouth built into a wall. But many more similarly-inspiring images would follow in the years to come. 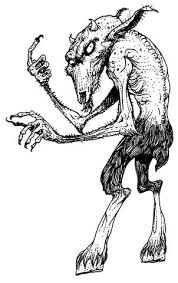 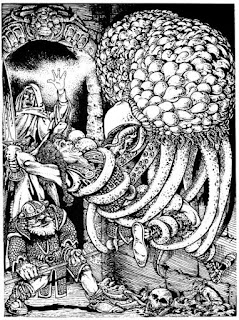 Let me preface this by saying I hold no credit for any of the artwork represented here obviously, but just want to share some thoughts and inspiration on it. Hopefully if someone stumbles upon this blog like some secret hidden door deep within a dungeon depth it can inspire a bit of creativity in them as well. In it's essence, the entire purpose of Creative Dungeoneering, to inspire just one idea or creative fellow Dungeoneer. 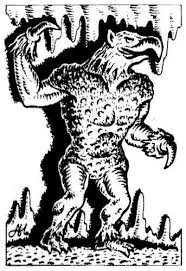 So breath in deep that musty papery smell, crack open that old TSR manual, and sometime, just pause through the pages as you did the very first time you'd delved into the realms of Imagination and started on the journey of fantasy role-playing, long before you understand things like "THAC0" and "skill mechanics" or even had the skills and spells for a 15th level Half-Elf Cleric-Druid multi-class early memorized...just artwork and inspiration..... 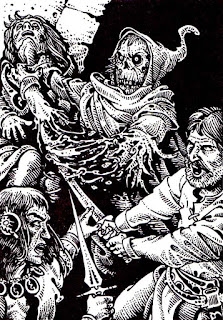 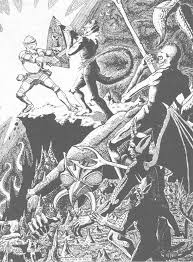