Through the misty forests surrounding the cliffs of Caligh-Khazdule rise the ruins of the once great Dwarven outpost, stretching like twisted decaying arms into the spiny tendrils of broken branches, thorny underbrush and ancient undergrowth. Within this old forest can often be seen the shadowy spirits guarding its environs; sprites, dryads and fairy kind, and the darker dwellers of these woods.
To the true hearted traveller there is little to fear, but to those who seek to bring upon this once peaceful land harm, chaos, or evil acts, the guardians of this narrow forest lay in waiting, ready to defend the last patch of sacred ground still floundering at the edge of the tattered and broken land that is, the ruins of  Caligh-Khazdule. 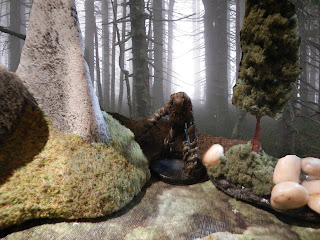 From the edges of a spur of rising rock, Cavalier the Paladin spotted the Dryad moving slowly, just a woodland shadow to the untrained eye. It swayed gently, moving against the breeze through a snag of tangled broken wood. Peering beneath his Aasimar helm, Cavalier locked his gaze into the deep yellow sockets of the noble guardian, allowing the Dryad's woodland spirit to sense Cavalier's nature, his journey and it's purpose. He knew that the Dryad would find in his heart only goodness and justice, and that he sought not to harm this sacred forest realm, but only to pass through, gently and reverently touching not the magic wilderness guarding the gateway to the evil that lay beyond. 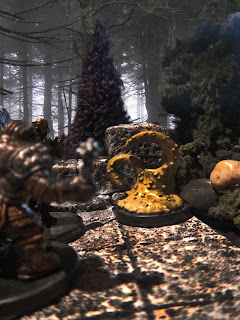 While the forest holds its share of sacred benevolence, it too has its darker side. As Klodius the Dwarven Warrior found at the very edge of the Caligh-Khazdule ruins. Where forests stop and deserted crumbling rock begins, the very foundations of the foul darkness that so permeates this scarred land can be felt, smelled, and seen.
Oozing beneath a torn pile of rubble and under rotting roots and decaying branches sprang the yellow Ochre, its spindly tendrils searching for fresh meat and needed sustenance, so rare in these empty ruins.
It grew slowly to a staggering height with a swirling squish of a sound, its monstrous form taking a stance of aggression as Klodius and companions moved slowly and cautiously past. "Waste not your energy nor muscle on so foul an encounter" he wisely called. "there are fouler things than slimes in the bowels of this horrible place."
The jelly's, slimes and oozes of the world need not be the most heroic of foes, but harm they can and have done. Many a warrior has lost his weapon, his limb or his life to lesser forms... 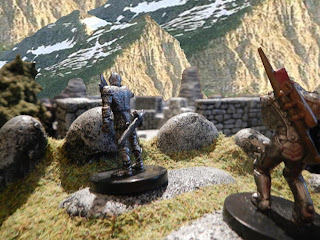 As forest gives way to wide open expanses of rocky canyon, Cavalier and Redgar look out over the rise towards the distant entrance of Caligh-Khazdule. The massive cliffs mark the main entrance to the once grand and well-guarded underground realm of the Dwarves.
One of the most northern fortresses under their control before the great Orc Wars of the first age, Caligh-Khazdule was most widely known for its production of gems, jewels and natural stones of utmost quality and value. And it was the magical properties both of the mountains from which they grow, and the stones themselves that drew such evil to this place over so many centuries, the onslaught of which grew so great that it eventually drove the Dwarven clans from this ancestral home entirely. Further west they ventured and to now unknown lands and even more remote locales.
To this cursed place few ever returned, and only the foolhardy go in search of wealth, adventure or quest. 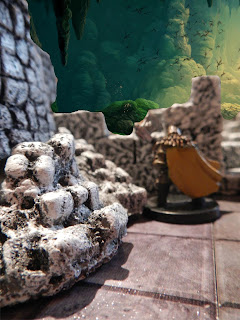 To the Western wall Tordek approached, seeing that none dared follow. He made his way gently through the tortured wood, past shadows and guardians of races he knew not, finding his feet at last on solid stone. Breathing a brief sigh of relief before continuing on, he tightened his grip on his axe, placed a small wad of dried beef in his mouth, and sighed deeply, breathing in a final breath of fresh mountain air.
At the ruins of the once great Western watchtower he would make his descent. Forest gave way to the massive cavern entrance, so vast that the uppermost ceiling of this treacherous tomb lay all but in perpetual darkness, so vast were its heights. Bats fluttered through the chamber, stirred by some distant movement and driving them deeper into their subterranean home. As he stood at the brink, staring over the crumbling walls of the precipice into the gloom of some distant floor miles below, he imagined the grand processions this great passage must have once seen; dwarven banners and great armies, caravans of supplies and people, young and old making this arched entrance and its legendary market a true wonder to behold.
But now, in the distant shadow lay only silence and the stench of rotting decay. In the distance water poured from some ancient river, tumbling through cracks and crevices in the great rocky cave bed. And everywhere hung the gloom of a thousand years of empty silence, with only rumor and legend to tell of what horrors lay beneath his very feet. 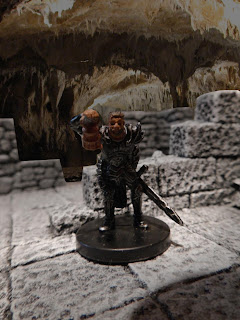 As Egan Jerrad held the lantern aloft, he gave a sigh of nervousness, pondering once More the words of the merchant he had met on the streets of Sohlnorus. "Travel not by that road" he said. "There are a good many places in this world to seek ones fortune, and a good deal to avoid. This, my friend, is not one worth the risks that underground city holds."
Still, the draw of the legendary city of Caligh-Khazdule was to strong for Egan to resist, and so he headed north and west, travelling for days to reach the foot of the great cliffs.
He knew it was by sheer luck and a bit of magical fate that he found his way through the Claigh woodland at all, thanks be had to a charmed amulet won from an inebriated Wizard in Daggers Port that he found his way here at all.
No adventurer's guild in all of Western Flanessia could deny him entrance with a famed Jewel of Caligh-Khazdule in his possession. He felt his knuckles tighten around the grip of his sword, and pushed the questions of equipment and preparation further out if his mind.
"We've gone over this enough!" he said to himself. "There's no turning back now."
But deep in his heart he knew, he may be stepping into something he was not yet ready to face. there was a reason none had maps, routes, advice or details about the ruins of Caligh-Khazdule. But then again, this was just doubts playing at his confidence.
"By Torms hand I will not turn back!" he said to himself. And with that he began the descent down the long winding stair that stretched out before him, its intricately carved stonework spiraling ahead into the shadow. His fate was now sealed, whether he knew it yet, or not. 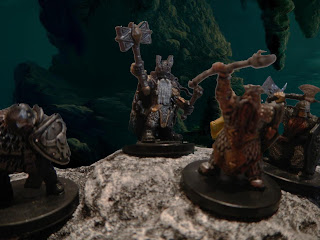 "Go back to the darkness from whence you were called!" Grun yelled from his perch. He held his axe aloft, its silver tharnumian crystal hilt shimmering in the eerie cave glow. his warriors had followed him this far, and bravery would not fail them now.
"This realm will be ours once more!" he yelled, striving to keep the moral of his warriors alive as the great best tore through rock and rubble with a deafening roar. 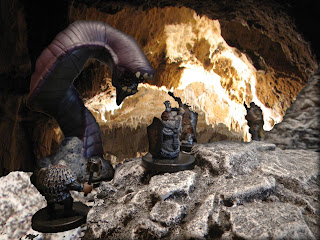 The great purple worm shot through the rocky underbed like a bolt, scattering shards of jagged stalagmites across the uneven chamber. Caught by surprise,the Dwarven troupe scattered, immediately turning and taking up low defensive positions. Each warrior knew it was in their blood, their very racial make-up to face and conquer such monsters, as their forefathers had done before them.
"This very beast feeds on the blood of our Ancestors!" Grogan yelled, marshaling the courage of his soldiers as only a Dwarven Sergeant can do. "Take him back to the pit!"
He hurled his axe through the air, landing it squarely into the worms soft underbelly with a sickening squirt,sending the acidic blood spurting in streams from the gaping wound and dissolving the finely crafted dwarven handle in just moments. 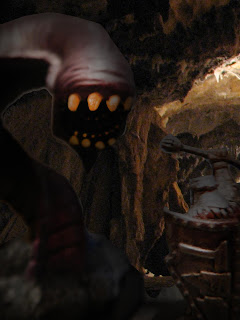 Angered, the beats now turned in full roar, facing the threat directly at its front.
Rushing to the forefront with his mighty mace drawn high, Morgrim blocked Grogan while he retrieved another weapon. Meet the Mace of my Fathers!" Morgrim yelled. "You have faced this before!" He raised the great mace in a swooping attack, lunging at the worm's open mouth. 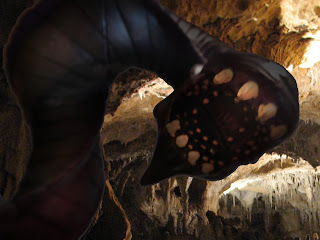 But Morgim's timing was not in the Gods favor, as his drawn hand met an open maw and a quick black swallowing darkness. Pain and burning, darkness and silence as the muffled cries of his anguish disappeared into the beasts mouth, swallowing him whole. 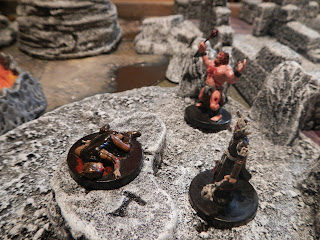 Deep beneath the cavernous tunnels and winding passages of Caligh-Khazdule, Zekraen Riynar, Priest of Orcus was nearly completing his ritual. The hireling made an adequate sacrifice, its blood now pooling over the ancient stone altar and seeping into the sacred bedrock beneath. In the distance, the glow of the bubbling lava pools sent fiery shadows across the walls of this most evil of chambers. At his sides, his loyal cultists, slick with the blood of their sacrificial self-mutilation, chanted harmoniously. Their blood splattered maces swaying in a trance like prayer of hate and doom towards the glowing fire ahead. 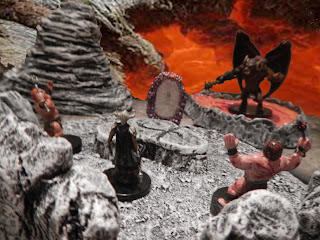 Through the mirrored image of the translucent portal came the shadowy image of the aspect, its form slowly emerging from the wall of storming fire and rising from the lava pool beyond. wings spread forth as the beasts wand reached out, calling to its worshippers in answer to their foul call. The very vision of Orcus, Prince of Demons had risen from the depths of this foul chamber, once more coming forth in the broken halls to lay claim to this mortal realm. This ceremony had happened before, but this time, Zekraen vowed to be the seat of power behind the rising doom that would infect this realm like the most vile of plagues. 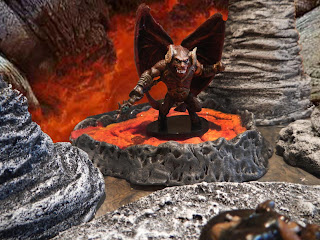 Orcus growled slowly, pleased with the sacrifice which called him from the depths of the Abyss. As the chanting continued, the magic now nearly completed, he grew in size and power. Soon his aspect would take on his true form, developing into the full demon shape in this world and allowing him to step forth from the sacred fire pool to the earth beneath, laying hoof to stone and walking amongst the living in the mortal realm, where his rule would bring to the world a future of endless war and torment for all the free peoples of this foul green realm.
His doom nearly complete, Zekraen smiled at the power he would wield beneath the rule of the great Orcus, bringing to the world a new terror, a new darkness, and a renewed war on the souls of all mankind.
Only one could now stop him. The pursuer he had evaded these last seven years. The one knight who sought to destroy his plans, and bring about an end to his final rise to power; the Paladin Cavalier Elrik, Knight of the Black Triangle.
But in moments, he too would be of little consequence. For as Orcus raised his great hoof, stepping forward onto the stone earth of the mortal realm, he ushered in what would soon become, a new age of darkness. 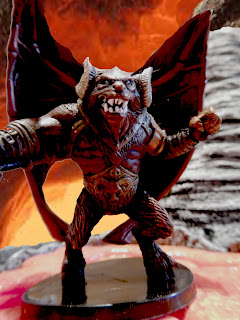