There are places in this world, deep places, dark and brooding and full of anger and hate.
Within these places often lie the echoes of history un-told, the stories and legends and fables and tales covered up, ignored, banished and forbidden.
They say that history is written by the victors, but within the depths of the earth lie the stories as they truly happened, waiting for resurrection, waiting for their return to the surface, to the knowledge of mankind.
But within these hidden halls and deep underworlds lie the imaginations and the abominations of all that is dark and evil and cruel in the world. These are the haunts and dwellings of the foul, the twisted, the cruel and the profane. These are the hidden lands, separated from time by centuries of rock and darkness, where in every corner of this under earth dwells horrors untold and arcane secrets unknown.
It is into this realm that the brave and foolish alike so often throw themselves, seeking fortune and challenge, honor and wealth.
But those who return, do so by only one of two paths; heroic triumph, or utter madness...

The Throne of Bone
The fabled Throne of Bone is said to exist far beneath the ancient ruins of the city of Bard Zuran, west of the Ered Ethlu'n and south of the Great Massif Spine. believed to have been constructed from the ancient spin of a deep dragon, the throne became embedded with the power of Lolth, the Demon Queen of spiders and the patron Goddess of the Dark Elves, when acquired after the 13th blood war of the underearth.
It's original builder, the Wizard Nero Baldam, had raised a great army of deep goblins, kobolds and troglodytes with plans to assault the Dark Elf city of Zanrabanar. From his throne, he communicated directly, so the legend goes, with the powers of the Abyss, calling into his control demons from one of the plane's many dark depths. But unbeknownst to Nero, this demon was in fact, a Yohlchol; a handmaiden of Lolth, secretly in service to the Drow Sorceress Shralaz. His best laid plans came to not as his fortress of stone was laid to waste, his throne possessed, and its whereabouts, lost to history.
Whispered voices speak of it being taken back to the council of Zanrabanar where many met their deaths in sacrifice to Lolth upon its spiked steps.
Surrounded by enchanted flames and topped with a single stone-carved skull said to contain ruby's of incalculable worth, the Throne of Bone is, in it's very construction, embedded with evil. Rumors of it being a doorway, a gateway, or a conduit to the realms of darkness swirl as prevalently as does the dark magic that surrounds it. 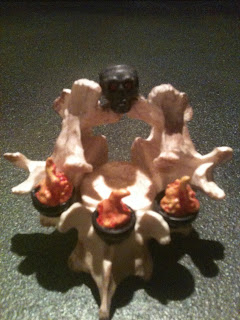 The Passage of Pain

Deep within the now abandoned dungeon of the mad wizard Loloch, lies the fabled Passage of Pain. Known by many thieves guilds and acrobat training clans throughout the realms as a testing ground, Loloch's Dungeon was notorious for its many traps, tricks, and acrobatic feats required for safe passage. So adept a wizard and acrobatic thief was Loloch, that he literally entombed himself into his own dungeon, many believe, by one of his very own traps. Whether he is deceased or still living none know for sure, as no body has ever been recovered. But what is known, is that through his years of magical study, he lived an unnaturally long life, and was believed to have found a secret to everlasting life. When mixed with the acrobatics and ability of a master thief, he acquired a treasure trove grand enough to rival even the greatest of dragon hordes.
It is into this trap-filled labyrinth that many have entered, and few have returned, seeking Loloch's supposed wealth while testing their mettle against all manner of tricks, traps and magical incantations.
The Passage of Pain is said to contain  6 massive steel blades, kept razor sharp through only magical means and controlled by some dark magic. While only moving on a linear plane, Loloch set them at irregular intervals, forcing the attempted to duck, jump and dive to safety. The many stains on the floors, walls and blades tell a horrific story of their use, and of the many failures these blades have caused. What starts and stops their movement none know, but it is rightly assumed that it is the ancient magic of Loloch, still cursing this most deadly of traps. 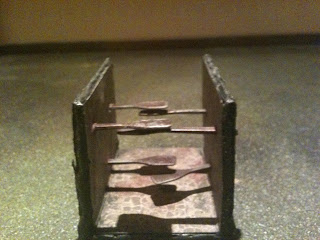 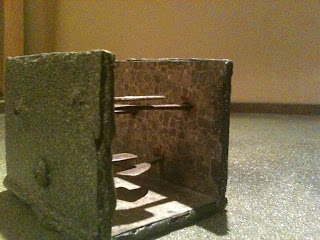 Outside walls are stone sprayed with heavy grey texture and dabbed with old brushes to give a rough stone look. This matches the same patern as all other stone pieces I use, thus making the Passage of Pain modular into any dungeon layout or adventure scene. 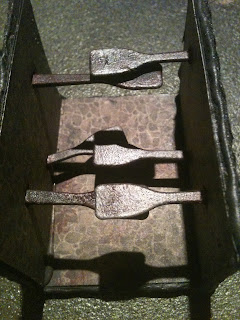 The blades of the Passage of Pain are simple white lip gloss/lipstick applicators from Bath and body works stores. They come as a small white plastic applicator, flat and with a smooth round edge and handle. these immediately reminded me of swinging blades. A sure sign of a gamers imagination running wild. When covered with a single thin layer of grey primer, the iron paint stuck well, giving these an "old steel" look. When dabbed with irregular strokes of crimson red and washed with a light brown to give the look of old rusted blood, the blades came to life as well-used machines of death.
Fixed into simple slots created with a hobby knife at irregular intervals in each side wall, the ends were then sealed with hot glue, and covered in a daubed gray and stone speckled paint to blend with the outer surface texture of the walls (see image #2).